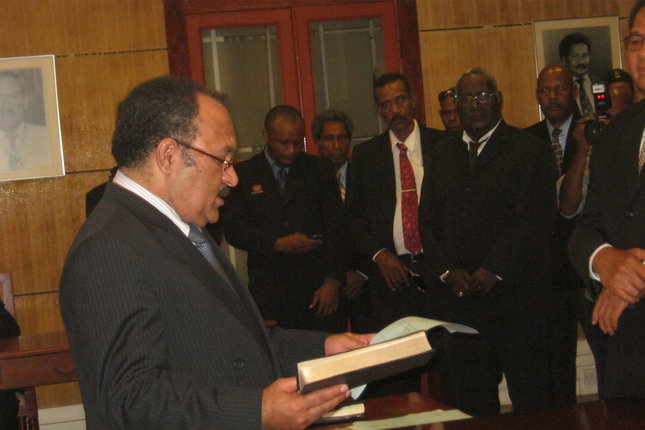 So, the Opposition, with a bunch of disgruntled (or opportunistic) MPs on the former government benches, moved swiftly and installed a new government for PNG. It was certainly a piece of high political drama, at which PNG excels, and provided a contrast from the incessant infighting within the ruling party. Whether the process stands up to legal scrutiny will not be discussed in this column, beyond noting that it clearly enjoyed an absolute majority of MPs and that there’d been a disruptive power vacuum hitherto.

Former Acting Prime Minister Abal should be commended for seeking to hold a somewhat unruly team together, and trying to impose standards, including launching an overdue inquiry into abuse of customary land (SABLs), in defiance of some party powerbrokers, and penalising some senior Ministers for apparent abuses (e.g. over licensing). Ultimately, however, Abal’s extended acting appointment was a poisoned chalice, lacking the universally-accepted mandate over power-hungry colleagues required to impose the discipline necessary for effective administration. The wider public, and some MPs, were dismayed by the incessant revelations over apparent financial abuse, particularly over the Development Budget and trust funds, and secrecy over the State-Owned Enterprises and how far PNG’s assets had been mortgaged for the LNG development. The litany of financial transactions seemingly falling outside the budget process, budgeted funds reportedly diverted for unapproved purposes, and untendered, improperly tendered or uncompleted projects, seemed to be cascading, and a clear halt needed to be placed on this, by one means or another. Even if only a fraction of the reported abuses were valid there seemed adequate justification for intervention to safeguard the public interests from malfeasance and complacent lack of accountability. With the next Election looming there was wide public anxiety that substantial public funds needed for basic public services, especially at District level, would be squandered to fuel electoral interests or siphoned off for other purposes.

So, what’s the difference now, with a new team, or partially new team in power? The former Ministers controlling the major financial institutions under the former government (widely termed the kitchen cabinet), have now been weaned from their succour, which comes as an immense relief to many concerned over their seeming indifference to public accountability. But who are the new team in government, especially with control over public funds and resources, and what are their policies and commitments? Will they be any more accountable than their predecessors?

The new Government has made many statements, many of which sound fine, if somewhat ad-hoc, others are more concerning. Whilst a vision is valuable, Ministers would be advised to recognise their limited term of office and consult staff, colleagues and public views before giving categorical positions, for example on OBE and instant free education, bringing the Sovereign Wealth Fund onshore, title over minerals to landowners, 10% conservation areas within misnamed ‘agro-forestry’ projects, etc. The energy and enthusiasm of the new team is commendable and immediate commitments to dispose of clear waste, like the Falcon executive jet, establishing ICAC and probing and addressing corruption in central agencies and SOEs, focussing on practical needs of basic infrastructure and services notably supporting LLGs, strengthening landowners’ participation and reversing the flawed Environmental Act amendment are commendable. However, the Government will be watched closely and needs to listen, put its cards on the table and demonstrate early commitment to honouring its words. Some Ministers from the old government are back in their same portfolios, including some whose actions raised concerns hitherto, e.g. over residual petroleum licenses, or the Lands Minister’s expressed support for the SABL process, whereby many landowners forfeited their land for 3-4 generations without even being consulted. The Minister announced expanding that area further (to 20% of total land area), in line with the deficient DSP, prepared by a small clique following virtually no consultation. The SABL process is a back-door mechanism for approval for unsustainable logging, and also undermines landowner empowerment and prospects for genuine agricultural development, as envisaged under the recent land reforms.

There is inevitable anxiety over the new Ministerial financial team: Polye’s limited experience for the key financial portfolio; Maladina’s suitability for controlling much of the Development Budget; and even over the Prime Minister, in view of his finance and banking legacy (although seemingly performing soundly during his brief stint as Treasurer). The public will feel in secure hands with Sir Mekere opening up State-Owned Enterprises to long overdue scrutiny.

PNG will miss Carol Kidu’s passion for the largely sidelined but crucial Community Affairs portfolio. Her warning to the new Government of its few months for implementation should not go unheaded. Promises to launch major new initiatives are naive and unrealistic. The new administration should focus upon core functions of government, and restoring the credibility of the institutions of the State, including Parliament, which have been badly undermined over recent years.

Parliament must be restored as a legislative body, overseeing the Executive and MPs representing their electorates, not necessarily as Ministers, nor managing project money, but by actively scrutinising existing and proposed legislation and government’s performance in delivering public goods and managing public funds. This includes providing MPs, including the Opposition, ample opportunity to question Ministers, even on awkward subjects.

Government must fill outstanding vacancies on boards of statutory bodies and SOEs promptly, not with cronies, but competent representatives, following due processes, and fill vacant acting positions and tackle long mismanaged agencies, like Lands, Agriculture and other bodies where basic functions have been sidestepped, and attention diverted to activities associated with overseas or other clients. The level of waste must be slashed, notably incessant overseas travel and allowances, and fleets of 4x4s clogging the city’s roads. The new Government has made a commitment to exposing and halting extravagant projects  which have dished out funds to cronies, like the NADP. They need to steer away from undue focus on projects and the Development Budget, and concentrate upon increasing routine (recurrent) funding and strengthening capacity to manage core expenditure for maintenance, restoration and basic supplies, teachers and training, substantially raising the pitiable K60 million for national road maintenance, the (nil) allocation for rural airstrips, basic funding for police operations, functional grants for schools, health facilities at the provincial and local level (especially in more deprived provinces). The core systems of accountability (and penalties) need reinforcing, including adherence to tendering, a requirement for budget allocations to be posted publicly down to the local level (e.g. schools), as well as requiring all public bodies to release prompt financial statements, reinforcing the Auditor General’s, and other watchdogs’ allocations, including the Ombudsman Commission (not diverting tasks to ICAC until such body is operational). Leaders’  income, assets, and returns should be released publicly through Parliament, not merely to the Ombudsman.

The new Government is briefly enjoying its honeymoon, but they must promptly demonstrate their commitment to competence and accountability. The public are hopeful, but sceptical and watching closely (as will be the Opposition). It’s not time for the Government to trumpet their virtues, as a smokescreen for business as usual and having their turn at enjoying the trappings of office. If they perform well, providing stable, honest government, focusing public expenditure on the needs of ordinary people, not the elite, no doubt they will gain public recognition and rewards through 2012 Election success. But if the commitments prove mauswara, with public funds and assets (like the Falcon) abused, more SABLs and trust funds issued and abused, overseas travel continuing unabated, then they deserve harsh treatment at the Polls next year.

This post was originally found here [pdf] at the Papua New Guinea Institute of National Affairs.