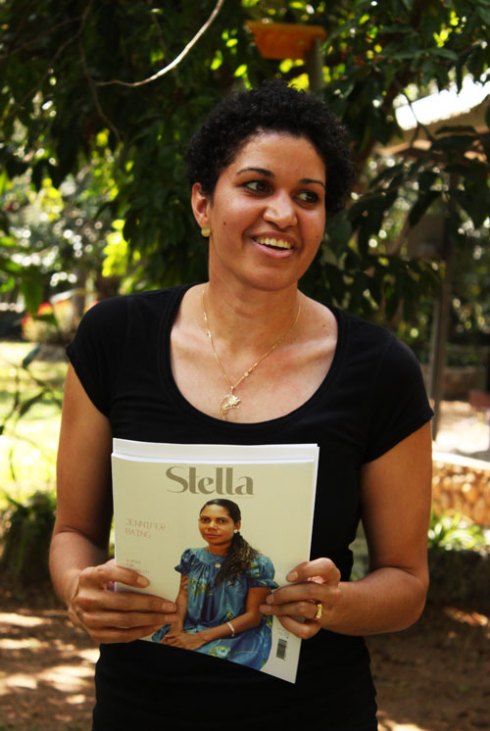 Telling stories of and for Melanesian women: an interview with Amanda Donigi

Tess Newton Cain and Amanda Donigi, publisher of Stella magazine, met recently in Vanuatu. You can listen to a podcast of their conversation here or read a full transcript here. For the highlights of what they discussed, read on …

I began by asking Amanda to introduce herself, tell us something about her background and what had brought her to Port Vila. She told me that her father is from the East Sepik region of Papua New Guinea and her mother is from Melbourne, Australia. Although she spent her early childhood in Port Moresby, Amanda was overseas for many of her formative years while her father worked for the foreign service and when she studied at university. After completing postgraduate study, she returned to PNG to work in publishing: the intention was to produce books but the reality is Stella. The reason for her visit to Vanuatu was to take part in a workshop organised by the Girls’ Leadership Education Advancement Mission (GLEAM):

They do workshops every now and then, mainly in Melanesia, and this week it’s in Mele Village just outside of Port Vila with a group of girls. It’s all about education, health, that kind of thing, and they asked me to come along and talk about social media, so that’s what I have been doing!

We moved on to discuss Stella – who it is for and what its voice is in PNG. Amanda explained that the magazine seeks to reflect the experiences and concerns of women from all parts of PNG society. It was originally targeted at women aged between 25 and 40 years who were interested in a wide range of national and world issues and wanted to stay informed and connected.  However, study of the actual readership revealed something unexpected:

25% of our readers are male: our buyers and our Facebook users and all that kind of thing, are male. So that’s interesting, men want to know more about women too. So this is also an opportunity for us to promote women in a more empowering way to male readers and show them that we can be equals and we can be respected. We are not trying to say we are better; we are trying to say we are on par. We should be treated equally.

Stella is a magazine about issues that is designed to appeal to women, rather than a magazine about women’s issues. Its aim is to inform and entertain, and it has a strong focus on visual impact to complement and enhance the text-based content. Amanda’s work and profile means that she has a lot of contact with young people throughout the region and has identified that an important issue of concern to them is health, particularly mental health:

… women are really concerned about mental health and … the sort of fall back for that is that you have to rely on the community.

Connected with this, and more generally, Amanda senses that women are not really given enough consideration, or appropriate consideration, by political leaders and other decision makers:

So there are lots of issues. But mainly I think the big issue that I’m always seeing is how women are not really considered too much. The issues that are important to women are not addressed properly, probably because we don’t have women in policy doing the policy making in government pushing for more, better rights for women.

In terms of advice and learning that she would share with aspiring entrepreneurs in PNG or elsewhere in the region, Amanda said that the most important thing is to follow a passion, something that can sustain belief, even when things are not going well. She also talked about the importance of having a mentor to provide support and guidance:

It’s a really good idea to find a mentor that you can trust, who supports what you are doing. And it doesn’t necessarily have to be someone in the same field as you, but somebody that you can bounce ideas off. Somebody that has enough respect for you to be honest with you, as well about what you’re doing.

We then moved on to discuss the role of social media as part of the business model for Stella. Amanda pointed out that the target demographic for the magazine is the one that is most active on Facebook and other platforms such as Twitter, although not (yet) to the same extent. Interestingly, the Stella brand has a much wider reach via social media than it does as a readership. Currently, the print run is 4,000 copies each month, but the magazine has a Facebook following of 31,000. This has prompted Amanda to explore not only new outlets for the magazine, but also the inclusion of an e-magazine, possibly on a subscription basis.

To finish, I asked Amanda how she rates the quality of the current relationship between Australia and PNG, and what factors influence her thinking on it. In terms of relationships between Papua New Guineans and Australians as individuals, she has a number of concerns, including that there are too many Australians occupying senior positions in businesses in PNG:

Amanda reflected that there is a responsibility on the part of the PNG government to legislate to address this issue. There is also a need to increase the minimum wage in PNG to make it easier for qualified citizens to work there, rather than seeking employment overseas or obtaining Australian citizenship in order to get an expatriate salary. Amanda also expressed concern that newly arrived Australians in PNG appeared to bring with them quite racist attitudes.

Amanda was somewhat ambivalent about the effect of PNG’s participation in the ‘Pacific Solution’ on the relationship between her country and Australia. Her perception is that Australian businesses benefit from the processing centre on Manus Island, rather than local businesses. Her sense regarding the reaction of the local community is that it is a good thing if it means that their access to healthcare is improved through the provision of a new hospital. However, she questions the price at which this comes:

We don’t need to be selling people’s lives for better health care. We can do it just with our resources, we’re such a resource-rich country. So if things were done a little bit better going back 20 years or so, then we probably wouldn’t be in this situation.

For what it is now, I still don’t think that it’s right to detain people just for trying to escape hardship, and to be part of that with Australia is, I think, quite inhumane and short-sighted of our Prime Minister …

Amanda Donigi is a strong voice and through her work she is amplifying the voices of others.

Tess Newton Cain (@CainTess) is a Research Associate at the Development Policy Centre. Amanda Donigi is the Publisher of Stella magazine.