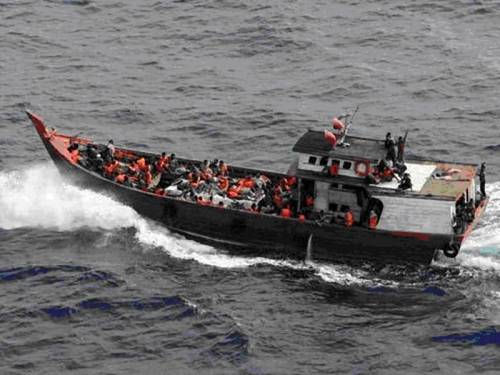 That $375 million for asylum seekers: where will it go?

By Robin Davies and Jonathan Pryke

On Monday 11 February, during Senate Estimates hearings, Senator Michaelia Cash asked the Department of Immigration and Citizenship (DIAC) a question that we have been asking ourselves, and trying in vain to answer, for a while: “So in relation to that $375 million, what is it going to be used for?” She was referring, of course, to the $375 million in DIAC expenditure on asylum seekers that will now be offset against this year’s aid budget. The answer she received, from DIAC’s new Secretary, Martin Bowles, was both illuminating and surprising. He said, “It will be in the onshore processing area. … It will be the processing from the system, which will include the held detention network, [Alternative Places of Detention], community detention, [and] bridging visas.” (Hansard [pdf], p. 33-34.)

When, last December, Foreign Minister Bob Carr, confirmed media reports that $375 million from the aid budget would be used to provide “basic subsistence for refugees waiting to have their claims heard in Australia,” this caused widespread concern for several reasons. There was commentary (for example see here and here) on the appropriateness of counting such costs as aid—though, as discussed below, this is not uniquely a question for the Australian government. There was criticism (see here) of the way in which the policy shift was executed, outside the normal budget process and only seven months after the publication of a four-year budget strategy for the aid program. And there was keen interest in the question where the savings would be found within the aid program—which question has now received a general answer—and with what negative impacts.

Those are all important questions. However, we were just as intrigued by the question that has now been asked of Mr Bowles. Given that $375 million is a large sum, and that Australia does not host a large number of asylum seekers by world standards, how exactly might so much money be spent by DIAC? More specifically, how might it be spent while remaining eligible to be reported as aid? We had been racking our brains about this for a while but simply couldn’t see the answer. The only way we could calculate costs in the vicinity of $375 million, while respecting the requirement that they be eligible to be reported as aid, was by including costs well outside the publicly-stated purpose of the funding reallocation.

We’ll briefly describe our reasoning in a moment but, first, some background.

The OECD’s Development Assistance Committee (DAC) is the body that determines, by a consensus of its members, what counts as Official Development Assistance (ODA), and therefore what costs can be charged to aid budgets. Its Statistical Reporting Directives [pdf] set out in quite brief terms what costs related to refugees and asylum seekers in donor countries can and can’t be recorded as aid. Essentially, a donor can report costs associated with the “sustenance of refugees in donor countries during the first twelve months of their stay,” including “payments for refugees’ transport to the host country and temporary sustenance (food, shelter and training).” A donor can’t report “expenditures on deportation or other forcible measures to repatriate refugees” or “amounts spent to promote the integration of refugees into the economy of the donor country.” By stipulation, the term refugee is here taken to include asylum seekers. Most donors have reported some costs in this category since it was created in 1988; a few have reported a lot. Australia has in most previous years reported no costs, or very limited costs (for example, only $6 million in 2010, and nil in 2011).

The DAC’s reporting guidance leaves plenty of room for interpretation. Over time, donors’ actual reporting choices have effectively established a body of case law on what can be done. The OECD document ODA Reporting of In-Donor Country Refugee Costs [pdf] provides much handy detail on the diverse reporting practices of donors. Said detail gets a bit mind-bending but suffice to say the variables are four: (i) when the clock starts ticking on the 12-month limitation, (ii) whether “quota refugees” (people accepted under the offshore component of some donor countries’ humanitarian migration programs, in the context of the 1951 UN Refugee Convention) are included along with asylum seekers (people who apply for protection at some point after their arrival in donor countries), (iii) whether costs are counted before, after or on both sides of the point of determination of eligibility for protection, and (iv) whether costs associated with rejected asylum seekers are included.  It’s the last three variables that matter most.

The 21 donors who currently report costs in this broad category have taken wildly different approaches, as portrayed in Figure 1 of the OECD document linked just above. For example, the UK and Belgium take a minimalist approach, reporting only costs associated with successful asylum seekers, and only up to the point of determination (accounting for 0.2 and 4.5 per cent of their total 2011 aid, respectively—see data in Table 13 here). At the other end of the spectrum, Denmark and Norway report costs associated with both asylum seekers and quota refugees, both before and after the point of determination, and they also include costs associated with rejected asylum seekers (with all of this consuming 4.1 and 5.3 per cent of their total 2011 aid, respectively). This is the maximalist interpretation of the DAC reporting guidance. It might be surprising that all these costs can be charged to aid budgets, but there it is. A donor in the middle of the pack will spend around five per cent of its aid budget on domestic costs associated with refugees and asylum seekers—or about $US12,000 per refugee or asylum seeker, per annum.

So where will Australia be situated in the DAC pack? We know that this year Australia will be reporting 7.3 per cent of its aid budget in the above category—only four DAC donors reported higher percentages in 2011—but we don’t yet know the per-capita costs, because we don’t know whose heads are being counted. We do know, thanks again to DIAC (Hansard, p. 25), that on the most recent numbers available there is currently a total of roughly 13,800 asylum seekers awaiting processing somewhere in the system. Of these, around 6,400 are in “held detention”, meaning they are being forcibly detained. Another 5,800 or so are in the community on bridging visas and a further 1,600 or so are in “community detention”, meaning they are free to move around but entirely dependent on DIAC, or its contracted service providers, for income support, health services and housing. In short, around 6,400 people are in administrative detention and 7,400 in the community.

Now, in pondering how the $375 million might be spent, our pre-Estimates assumption had been that only costs associated with people in the community would be covered by aid funds. Why? Well, for one thing, that’s what Mr Carr said the funds would be used for. More importantly, using aid funds to meet costs associated with onshore detention facilities is in no way consistent with the purpose of aid as defined by the OECD, which is “the promotion of the economic development and welfare of developing countries”. The purpose of Australia’s policy of administrative detention is to deter prospective asylum seekers. While we had decided to treat people in community detention in the same way as those on bridging visas in our calculations, since they inhabit a grey area, we had not for one moment considered including anybody in forcible detention.

The number of people in question, we estimated, would be at the very most 28,000. Australia’s humanitarian migration program now makes available 20,000 places per annum, including 12,000 for quota refugees. Asylum seekers whose claims are recognised get slotted into one of the remaining 8,000 places, under a policy dating back to 1996-97 that brought asylum seekers under the overall cap on the humanitarian intake. Then we assumed—on the basis of these [pdf] DIAC statistics—a high level of annual applications for protection from people already in Australia, at say 20,000, and a high rejection rate of say 40 per cent (the actual rejection rate in 2011-12, across all categories of applicant, and after appeals, was 32 per cent), thus arriving at a maximum of 8,000 rejected asylum seekers per annum—and therefore a total pool of 28,000 people generating reportable costs. Multiplying that number by the median DAC per capita cost ($US12,000) gave a total cost of about $A315 million. Assuming somewhat higher-than-average per capita costs (i.e. more like $US15,000) took us closer to $A375 million, on our maximalist assumptions.

The line of reasoning just described inclined us to think there was a disconnect between the size of the funding allocation and what had been said publicly about the uses to which it would be put. Now Mr Bowles has rendered our reasoning pretty irrelevant, while greatly amplifying the apparent disconnect. If, as he said to Senator Cash, the $375 million is to be spread across the entire system, including the “held detention” system, then of course one can easily imagine how it might be swallowed up. After all, the overall asylum-seeker management budget is now above $2.2 billion in 2012-13 (Hansard, p. 22). It’s not even necessary to assume that the Government intends reporting costs associated with quota refugees, or rejected asylum seekers. What Mr Bowles has said is not only inconsistent with what Mr Carr has said, but much more so than we might have expected.

The central issue is that there is, at least as far as we have been able to determine, no international precedent for reporting as aid costs associated with asylum seekers in forcible detention. That’s no doubt related to the fact that we can see no way of making a case that such costs meet the definition of Official Development Assistance. Some other donors report costs associated with “reception centres”, but such facilities sustain rather than confine their occupants. The Government has some explaining to do.