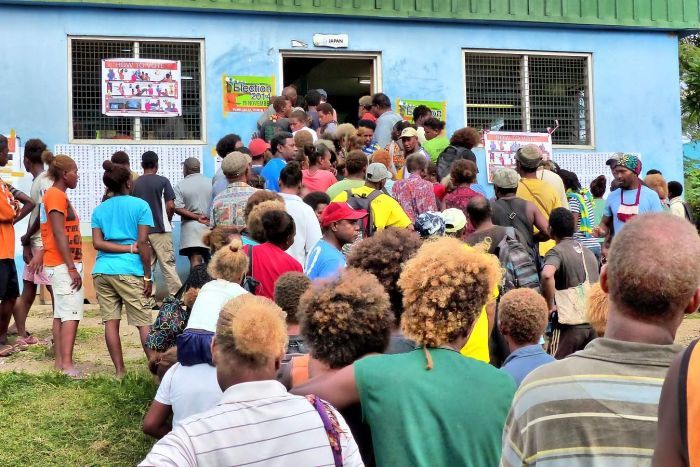 Solomon Islands suffers serious development problems, many of which stem from poor political governance. Social services are weak, productive businesses are impeded by dysfunctional government departments, and corrupting businesses render some government departments dysfunctional. Politicians who should be improving ministries when they are ministers, or holding the government to account when they are in opposition, are caught up instead in endless political wheeling and dealing, and often end up tainted by money politics.

As I wrote just before the elections late last year, Solomon Islanders are not happy with this — they want change. The trouble is their country is trapped by its clientelist politics. Because the country is so poorly governed and because it is devoid of social or political organisations of the sort that might enable large-scale collective action, the only change voters can hope for is the change that comes if they vote for an MP who will help them directly; and so voters cast their votes in search of direct assistance. This is reasonable — voters have real needs and have never experienced improvements in national-level governance to show how needs could be met any other way. The trouble is such voting selects and incentivises MPs to focus on the local instead of the national, and this has been a major contributing factor to poor governance. There is a vicious cycle. Clientelism also contributes to unstable national politics as MPs trade their support across the aisle while seeking more resources to bestow as patronage upon key supporters in their constituencies.

With this as background context, the obvious question for 2014 was whether there was any change afoot?

One hope held by some was that the 2014 Political Parties Integrity Act [pdf] would help create healthier politics. Something it would do, it was claimed by proponents, through fostering political parties (which have historically been weak and fluid in Solomon Islands) and, through this, party politics of the sort that affords countries such as Australia and New Zealand some political stability. Yet, even if the act was successful in bringing stability (and on my reading this was unlikely) there was no reason to believe it would change the most damaging feature of Solomon Islands’ politics: its clientelism.

And yet, for a moment around election time it really did look like some sort of change was occurring. For a start, the number of candidates affiliated with parties increased substantially: in 2010 only 22 per cent of candidates were associated with parties; in 2014 just under 45 per cent were. And then, as election results came through, it became clear that 2014 was going to be a different election in another way — it was proving to be a very good election for sitting MPs. 78 per cent of the MPs who defended their seats in the elections won them back, which contrasts with a post-independence average of 53 per cent. Possibly these two facts were connected: parties were growing stronger and this was bringing some form of stability.

This would be interesting if true. And encouraging: even if this wasn’t a direct cure for clientelism, if a simple legal change could shift Solomon Islands politics, possibly the road to reform might not be so hard. However, closer inspection of election results provided no reason to believe the parties law caused increased incumbent survival. This is because, while more candidates were associated with parties in the 2014 election, far fewer sitting MPs were — most stood as independent candidates, and so, as Figure 1 shows, compared to previous elections, most of the successfully re-elected incumbents weren’t party candidates. Meanwhile, looking at all party-backed candidates (not just incumbent MPs) a similar picture emerges. In 2010, on average, party-backed candidates did discernibly better than independents (16 percent versus 8 per cent), but in 2014 party-backed candidates polled slightly worse than independents (10 per cent versus 11 per cent).

Figure 1 Percentage of re-elected MPs who stood as independents or party members, 2010 and 2014 compared 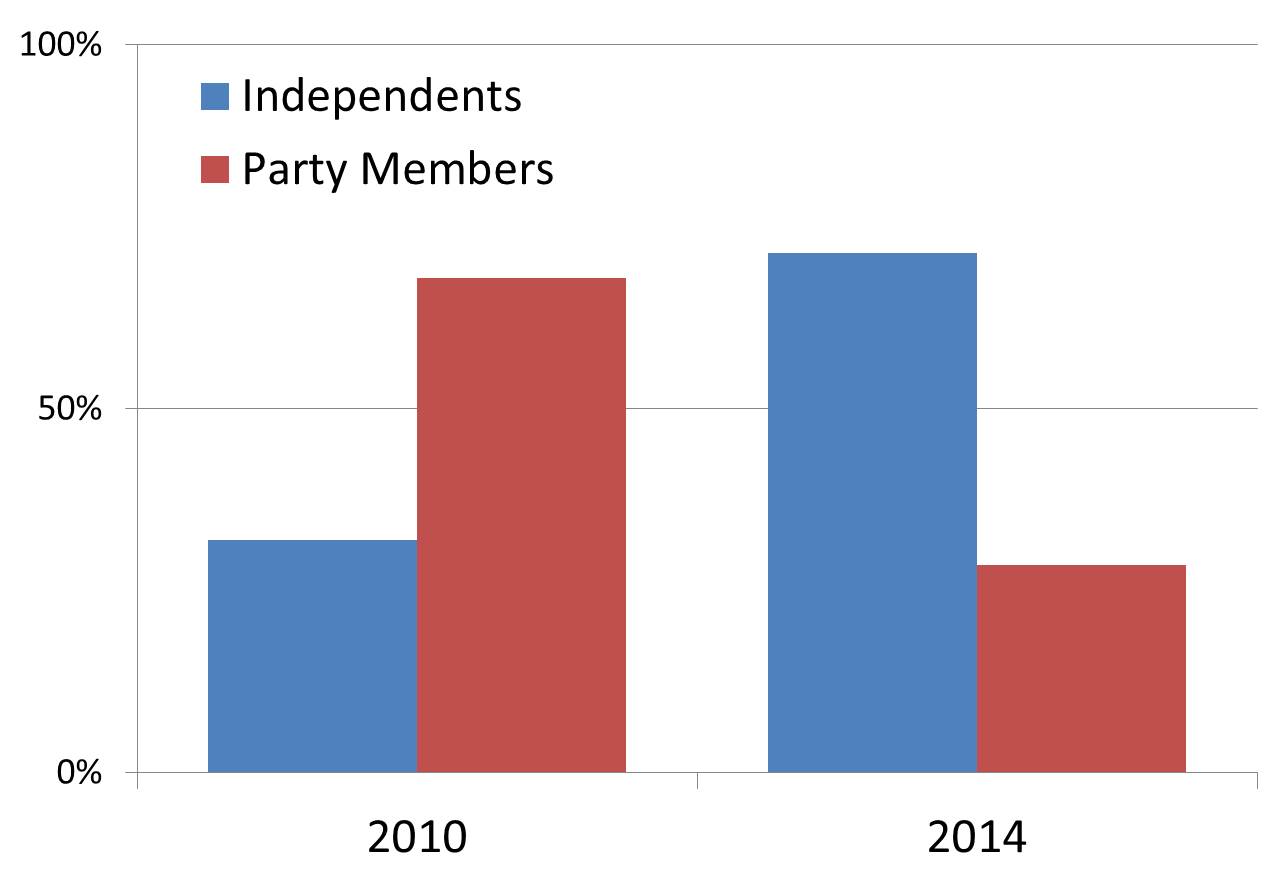 Change certainly appeared to be afoot once election results were available. The trouble was the different components of change pointed in different directions: parties seemed more prevalent, but party candidates performed worse. This wasn’t such a puzzle though. It was easily explained by one factor, the crucial ingredient of electoral success in Solomon Islands: money.

As Figure 2 shows, in Solomon Islands, there is a clear association between economic growth (averaged over the electoral term) and the fortunes of sitting MPs in elections (measured as average incumbent vote share). There are two outliers — 1993 where elections occurred after major redistricting and 2006, the first elections after the country’s civil war — but otherwise the relationship is strong and, born of the fact that times of comparative economic plenty are also times when there are more resources available for MPs. In the case of 2014 the state came to the party as well. Constituency development funds (money given to sitting MPs to spend in their constituency more or less as they please) have been a significant feature of Solomon Islands patronage politics since 1993, and voters are aware of their availability and have tended to take them into account in assessing MPs’ performance, something that has reduced the incumbent advantage they afford. However, over the 2010 to 2014 term, constituency funding increased rapidly: by 2013 it totalled about AU$850,000 per MP per year. And in the immediate lead-up to the election the government delivered an additional late tranche of funding to MPs, which helped meet their campaign costs. As a result MPs were flush with resources and had less need than ever to go to party power brokers for cash (those fluid parties that have existed in Solomons have functioned primarily as a source of money, with party power brokers giving resources to candidates). So most sitting MPs stood as independents, while party power brokers mostly ended having to support non-incumbent candidates, who didn’t poll well simply because incumbents had an overwhelming advantage monetarily. 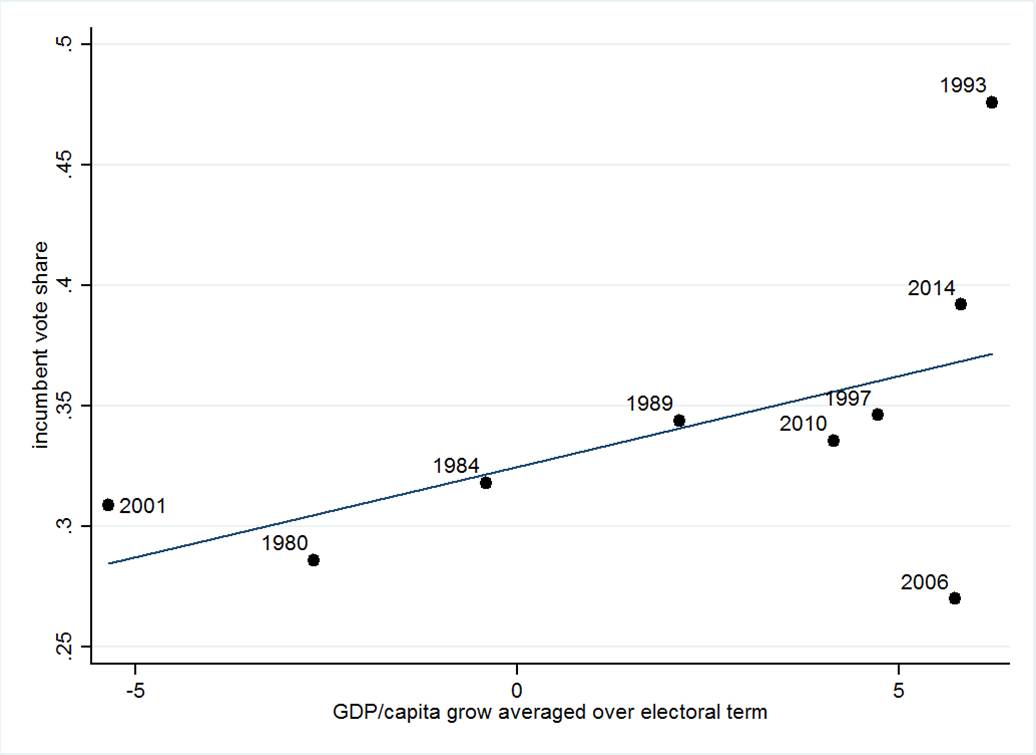 And so, while initial results suggested something in the nature of Solomon Islands politics might be changing, there is no reason to think this is the case. Money matters in Solomons politics as much as ever. And electorate level politics remains clientelistic. While, as the weeks immediately after the 2014 election showed, with the last minute defection of MPs from one coalition to another and an altercation on a resort island associated with this, the horse trading of government formation is unchanged.

Amidst all this, an optimist can perhaps find one area of hope. Recent years have brought with them the rise of new internet-based civil society groups in Solomon Islands, and these have played some role in shaping public discussions about government corruption and holding MPs to account. There is no guarantee these groups will grow any further, or that they will manage the crucial move from the internet to the real world, and arguably some of the actors associated with some of the groups have ambiguous motives, but the groups are new, interesting, politically-oriented, and have sprung forth of their own steam. If positive change to Solomon Islands politics is coming, or going to come from any direction any time soon, such groups seem the most likely source.