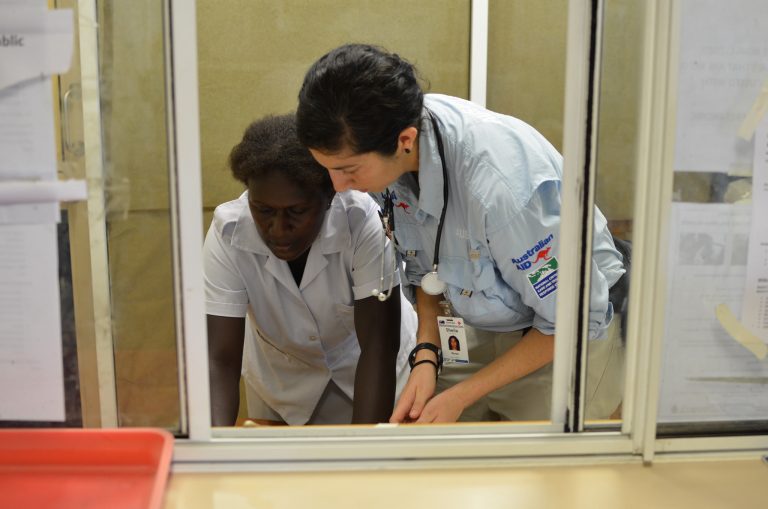 The art of saving lives: getting ‘global’ right – part one

Bilateral and regional relations between countries have long been the bedrock of international diplomacy and aid programs, including Australia’s. But in recent decades, global forces operating outside traditional bilateral and regional frameworks have come into play: globalisation of trade and supply chains, large-scale migration, increased access to the internet and low-cost mobile phones, cashless payment apps for those with limited access to banks or transport (two-thirds of the world’s mobile money accounts are now in Africa). All these have been transformative, lifting millions of people out of poverty, but they also require new development policy approaches and thinking.

New policy approaches and thinking are also needed when it comes to global public goods. These are global issues that are specifically the responsibility of governments: if the public sector doesn’t act to create these goods (for example, clean air) they simply won’t exist. Among the suite of global public goods, aid agencies have primary responsibility for one of the most important – the development of new drugs, diagnostics and vaccines against diseases that fall outside the market; threats like ebola, tuberculosis (TB), malaria and childhood diarrhoeal illnesses. In the absence of commercial drivers, it is a public and philanthropic responsibility to create these tools – just like clean air. And beyond the humanitarian imperative, it also makes good economic sense: new tools accounted for a remarkable 68% of the improvements in life expectancy in the 20th century [1]; and this reduced mortality in turn accounted for 11% of recent economic growth in low- and middle-income countries [2].

Australia’s aid agency is making an increasingly important contribution to this global good. As part of the new Health Security Initiative for the Indo-Pacific region, DFAT and its Minister recently announced up to $75m over five years for global Product Development Partnerships (PDPs) creating new drugs, diagnostics and vector control agents for TB, malaria and other mosquito-borne diseases, as well as its intention to play a greater leadership role in the PDP Funders’ Group (see Table 1 for top funders). 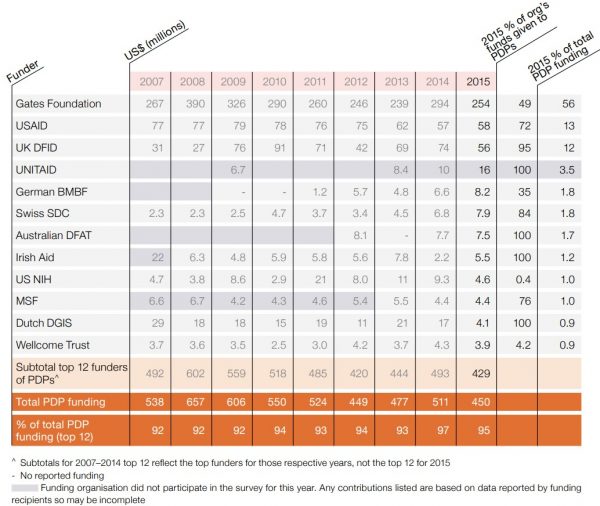 This increased funding is very welcome. However, it is also worth considering policy changes that could further increase its effectiveness. In the remainder of this post, I focus on continuity and scope of investments. In part two, I will look at what needs to be done to ensure that policy frameworks and funding parameters closely match research and development (R&D) needs.

Globalisation isn’t going away, and neither is the public responsibility to create global public goods.

Australia’s commitment to global health R&D funding has been patchy to date, with funding stops and starts and frequent changes of focus. The advent of DFAT’s PDP Fund looks set to improve the situation by making a funding commitment of up to five years (2018-23), and hiring dedicated staff to manage the program – both excellent moves. Nevertheless, this future funding is unstable, with a proposed 25% annual reduction to the funded PDPs in the final two years. This is the opposite of what one would expect (and need) if products are successful and moving into final large-scale trials, and raises the question of why funding would be cut if projects are doing well, or why it would be commenced if there is no commitment to fund projects to conclusion.

It is time to formalise global health R&D in Australia’s aid program. Global health R&D should not be up for question every three to five years, as if it were an optional extra. It is an important global good and should be a formal part of the aid agency program – as it is in the UK, US and European Commission – sitting alongside bilateral, regional and multilateral programs, and with a stable annual funding envelope and durable support structures within the aid agency.

With its first global health R&D investments in 2012, AusAID understandably took a ‘toe in the water’ approach to its global responsibilities, investing small amounts into PDPs for just two diseases – TB and malaria. DFAT continued this approach, investing into a few PDPs operating in the least risky areas (products that were close to completion, lower cost drugs and diagnostics), and focusing on threats to Australia posed by emerging drug-resistance.

As a start-up strategy, this was eminently sensible. But we are now five years in. There is ample evidence that the PDP approach works – delivering the world’s first paediatric malaria and TB drugs, a single-dose drug to replace the 1944 two-week treatment for relapsing malaria, and with the first new TB regimen in fifty years now entering final trials.

It is time for Australia to expand our approach beyond low-risk areas and health security threats. As a rich and generous nation, we should also contribute to global R&D efforts against diseases that are not threats to us, but are vitally important for our neighbours – childhood diarrhoeal illnesses, tropical worm infections, maternal haemorrhage, and reproductive health needs – as well as to global efforts to develop higher risk, higher impact products like vaccines, including for AIDS, TB and malaria. DFAT’s recent decision to expand its investment to PDPs for vector control is an excellent step (insecticide-impregnated bed nets are already at risk of failing), as is the inclusion of vaccines in the general scope of DFAT’s new Indo-Pacific Health Security Initiative (although not in the PDP Fund).

It is true that some of these diseases, including ebola, are unlikely to ever have a large footprint in our region, but that’s not the point. Australia is the world’s thirteenth largest economy and the only one with 26 years of consecutive growth: it’s time we fully joined the global effort to stop millions of infectious disease deaths in the developing world.

Part two of this post looks at what could be done to ensure that Australia’s policy frameworks and funding parameters closely match global health research and development (R&D) needs.