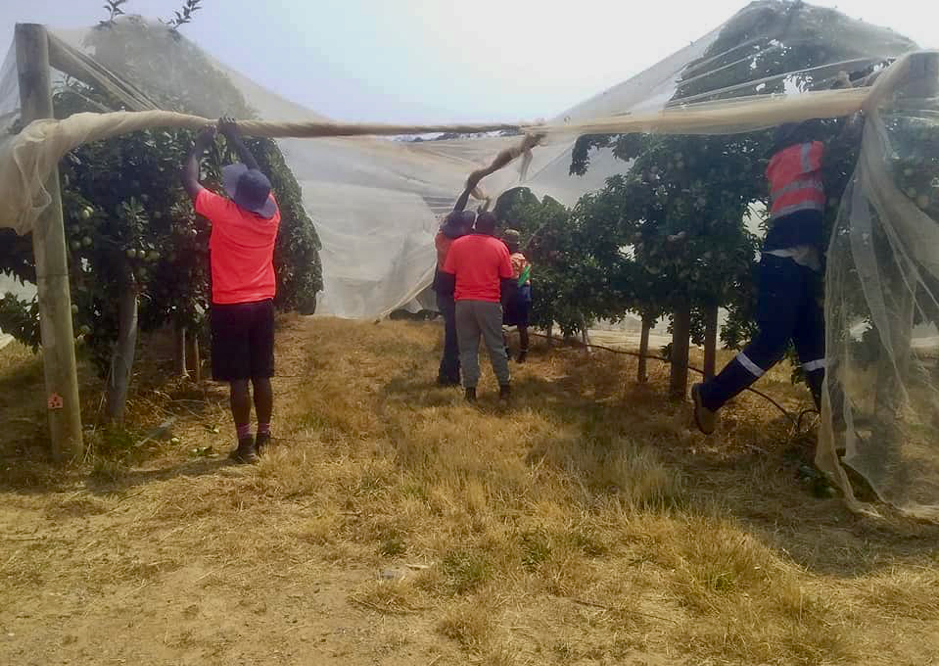 SWP workers return to work on an orchard in Batlow following the bushfires (Credit: James Walau)

The Batlow bushfire and SWP workers

In January at the height of the Australian bushfires, I received a message from James Walau, a ni-Vanuatu Seasonal Worker Programme (SWP) team leader, informing me that he and his team of 47 had left Batlow due to the impending fire. Since September 2019, Australian firefighters have been battling bushfires and it is estimated, currently, that over 12 million hectares has burnt. Among the many affected are farmers and workers participating in the SWP. This blog discusses the impact on a group of 48 ni-Vanuatu SWP workers evacuated from Batlow in the New South Wales Riverina region. It is in no way intended to neglect or downplay the experiences of the thousands of people who have lost their homes and livelihoods, and those who have lost their lives and loved ones. Rather, this blog is part of a larger discussion on experiences of SWP workers in Australia.

In the first few days of 2020, the community of Batlow was told to evacuate. It was predicted that the fire would destroy the township, which was declared to be ‘undefendable’. The team of ni-Vanuatu workers had only been in Batlow since late November 2019, five or six weeks into their six to nine month stint working on orchards with apples and berries. For many, this was not their first SWP season, and knowing the area proved to be advantageous in their evacuation. As Walau informed ABC’s Pacific Beat, ‘We are lucky, we have so many friends that helped us. We know the area with the two seasons we already have, so easier for us to move.’

The group, all men, evacuated Batlow – their workplace and home – on 31 December. In preparation for the evacuation, workers had been informed to pack all essential documentation and their bags. They did not know what the fate of the farm would be, only to prepare for the worst. A packhouse for berries had already been destroyed by the fire.

Initially, the group took refuge at the Batlow RSL Club; however, it was clear this was not going to be a safe option. After discussion, Canberra was ruled out and the next plan was to travel the 25 minutes to the Adelong evacuation centre. Once they arrived in Adelong, they realised the centre could not accommodate everyone, so the decision was made to travel further again, another hour away to Wagga Wagga where they could all be accommodated together.

When they got to Wagga Wagga, they notified their labour hire company of their safe arrival and their employer transferred money into a bank account for the workers to purchase food and supplies. The group were welcomed into the township of Wagga Wagga and received excellent support from the community. In a video clip, that’s since gone viral, workers showed their appreciation to the host township too. The group also became involved in community fundraising activities through a local church to assist with donations for those affected by the bushfires.

Fundraisers are a normal part of life in many Pacific countries. In previous work I have documented how seasonal workers have contributed funds to assist with responses to natural disasters in their respective countries, but also those in their host countries. Workers in New Zealand’s Recognised Seasonal Employer scheme (RSE) raised funds for Christchurch after the tragic 2011 earthquake. SWP workers not only fundraised, but also assisted in evacuations and the clean-up process in response to various floods in Queensland. Colin Foyster, an avocado farmer in northern New South Wales, also praised his workers from Papua New Guinea for helping to fight the fire on his farm. Support from Pacific workers for the communities in which they live and work during their time in Australia has always been valued.

We’ve seen generous support for Australia from Pacific nations for the bushfire disaster too. Papua New Guinea deployed 100 military personnel on 13 January. Vanuatu donated 20 million vatu (approximately A$240,000). And there are stories of grassroots fundraising for the fires from communities across the Pacific.

Back to business as usual?

Walau and the group returned to Batlow on 12 January and started work again the next day. The orchards where they are employed only suffered minor damage. Walau told ABC’s Pacific Beat,

‘We prayed for our farm to be protect [sic] so we could have jobs … now we can go back to our jobs … We are so lucky our orchard is safe and our camp is safe. When I let the guys know, they just praised God and [started] singing, because they feel they are going to have a job again.’

They were lucky in comparison to other farmers in the region. On 11 January, ABC Canberra spoke with Batlow apple farmer Malcolm Stein reporting that, ‘thousands of trees were lost at his orchard in Batlow after fires swept through the Snowy Mountains’.

The season for SWP workers is short. With the workers having only resided in Batlow for approximately five to six weeks when the fire swept through, there is a high chance that they would have only just paid off the debt associated with participation in SWP. Some may still owe money, as depending on the season’s work it can take up to two months before workers begin to start earning money over and above their participation costs. Time not working is time and money lost.

The Batlow example had a good outcome. But has it been the same for other SWP workers in similar positions?

Unable to obtain data on the number of SWP workers affected by bushfires, it is unclear what the impact has been. A recent Radio New Zealand article citing Vanuatu’s Labour Commissioner, Murielle Meltenoven, stated, ‘there are 480 workers who are not in danger or [are] unlikely to be brought back to Vanuatu’. What, then, is the total number of SWP workers affected? How many SWP Approved Employers have endured significant damage? Will this impact the jobs available for seasonal workers in future seasons?

For workers currently in Australia – what have been their experiences of the bushfires, what impact has it had on their earnings, will it affect future job prospects, and do they have any intention of returning for another season? There will be several lessons to be learned from this disaster. In order to figure out what lessons need to be addressed, more research is required. Conversations with labour contractors, employers, workers, local communities and participating government departments, will be necessary to piece together a full understanding of the impact.