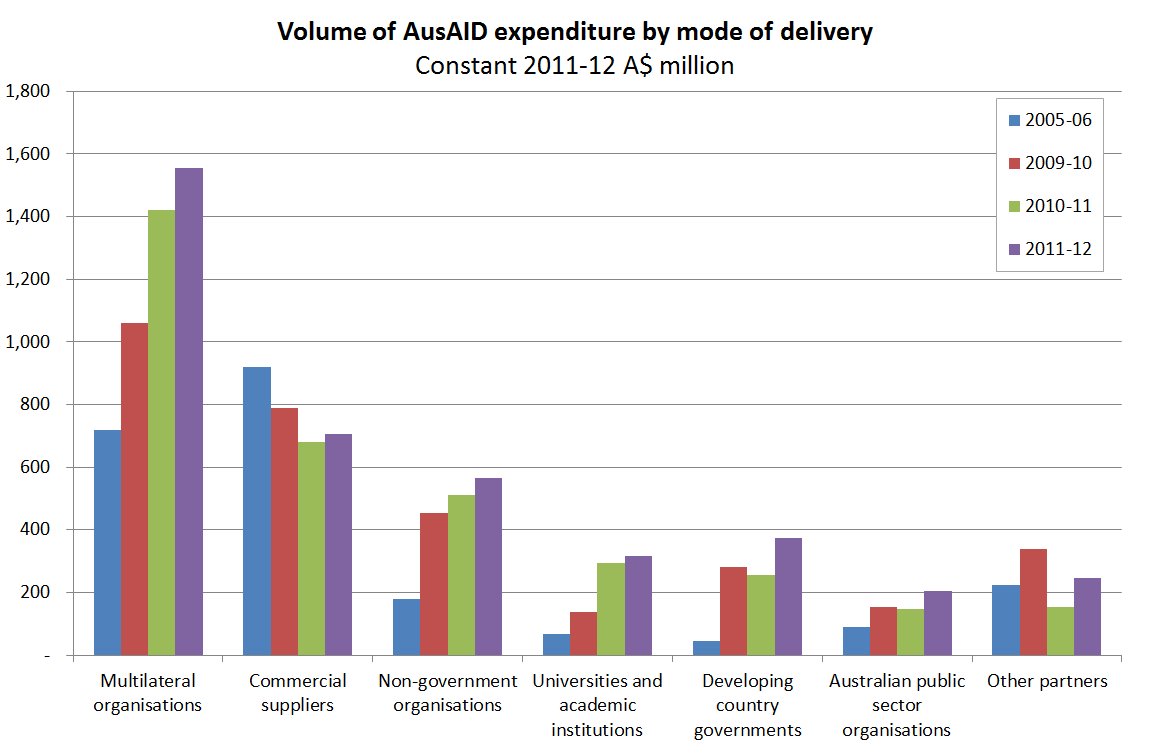 The continuing revolution in Australian aid

By Parima Panpruet and Jonathan Pryke

Stephen Howes’ 2011 blog post “The quiet revolution in Australian aid: a blog for Tim Costello and Aid Watch” outlined dramatic change in the way AusAID gives its aid. Stephen argued that criticisms against AusAID’s overuse of private contractors were based on out-dated information, and that in half a decade the proportion of aid channelled through private contractors had halved. Stephen used this graph from the Independent Aid Review to illustrate his point.

AusAID expenditure by mode of delivery 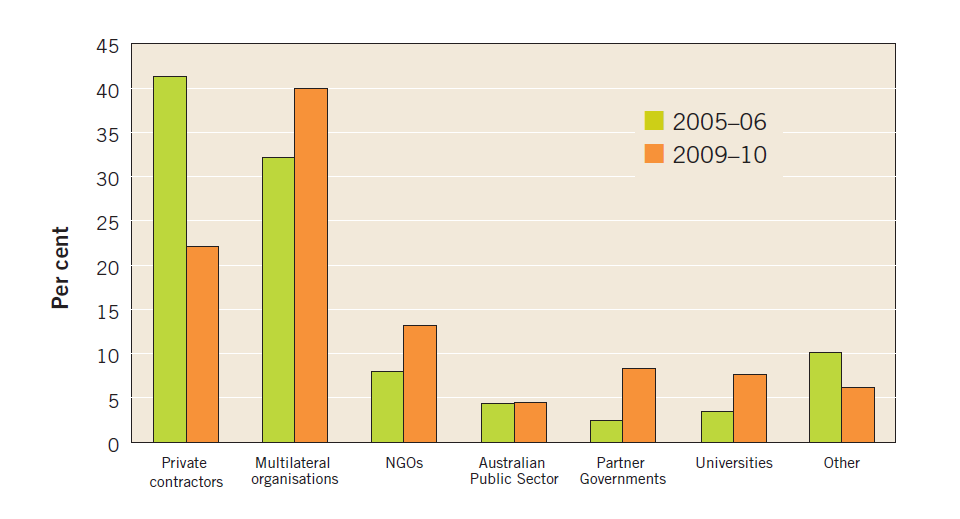 With the recent release of the Australian aid statistical summary (‘Green Book’), along with accompanying time series data in excel format, we can update Stephen’s post, and make some further points of analysis. The graph below takes a look at the same flows as the one above but with more updated information, and provides information on more years for which to make a comparison. Between 2005-06 and 20011-12 ODA spent through AusAID increased (in inflation adjusted dollars) by 84% from $2.2 billion to $4.1 billion. The fact that expenditure by mode of delivery is still changing while the aid program was expanding so rapidly makes the overall impact of this silent revolution even more powerful. 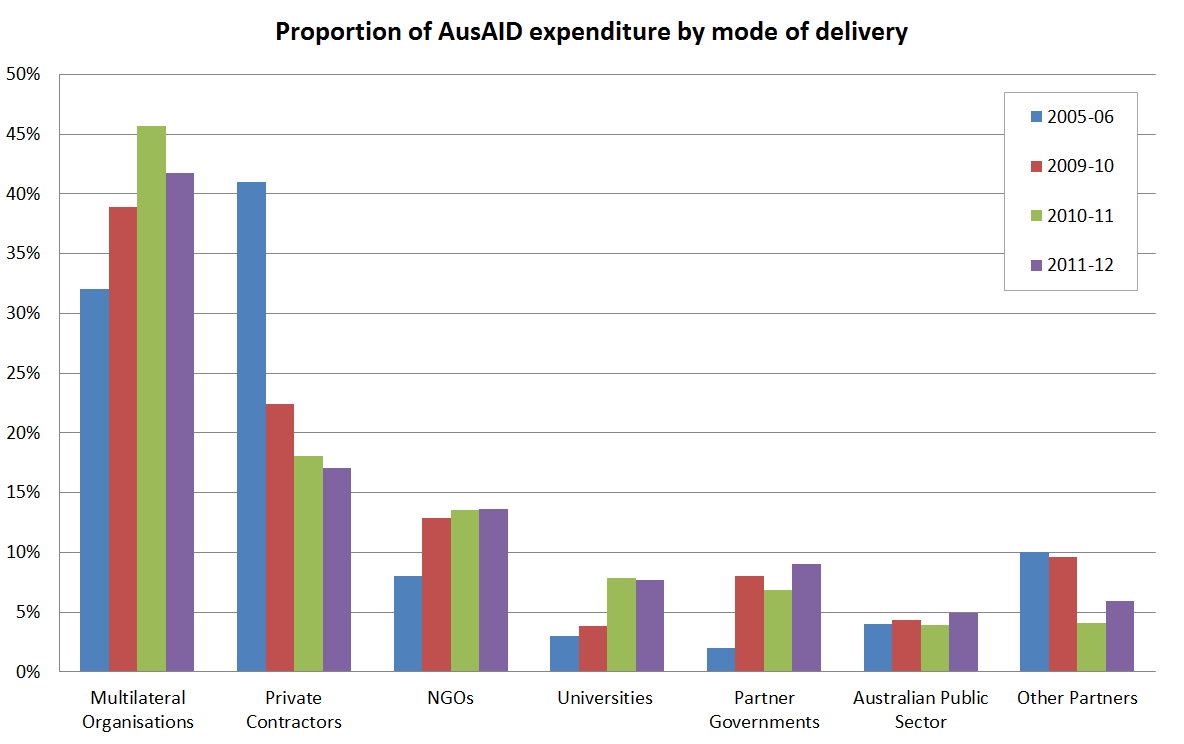 Note: 2009-2012 figures are sourced from the Green Book (Table 2). 2005-06 figures have been calculated from the proportions detailed in the Independent Aid Review (p. 64).
Data-set available here.

Here is the graph again in absolute amounts (adjusting for inflation).

The most obvious point from the graph above is that the revolution in Australian aid is continuing. The private sector has continued its decline as a channel for aid, both in proportion of the total aid budget and in absolute terms. In 2005-06 41%, about $920 million (in inflation adjusted 2011-12 dollars), was channelled through private contractors. In 2011-12 that number was down to 17%, or $707 million.

Partner governments have seen their share of AusAID funding increase from 2% in 2005-06 to 9% in 2011-12. In dollar terms that has seen funding increase from $45 million to $372 million, representing an eightfold increase. Stephen attributed this rise to AusAID emerging from the hangover of its failed ‘no-string attached’ budget support policies to PNG in the 1980s. Some of this funding would be budget support, but a large amount would be earmarked funds given to partner governments to implement particular projects, including the two large post-tsunami education and roads projects in Indonesia.

Universities are another clear winner in this restructuring of the aid program, with funding increasing from 3% to 8% of AusAID’s total expenditure. This has seen university funding increase from $67 million to $317 million (a 470% increase) over the same period, a reflection of Australia’s massively growing appetite for scholarship programs.

The share going to NGOs has also steadily increased from 8% to 14%, with funding tripling from $180 million to $566 million. Of the total funding going to NGOs in 2011-12, 55% (or $307.3 million) of it went to Australian NGOs, a third of which was directed through the ANCP program, which provides core funding to accredited groups.

Finally, multilateral agencies have been the clear winner over the recorded period, with their funding as a proportion of the AusAID budget increasing by 10 percentage points. This has more than doubled overall funding to multilateral agencies from from $718 million to $1.73 billion. More AusAID funding now passes through this channel than any other mode of delivery. Thanks to the wealth of information available in the Green Book we can also see which multilaterals have fared the best from this unprecedented scale-up. 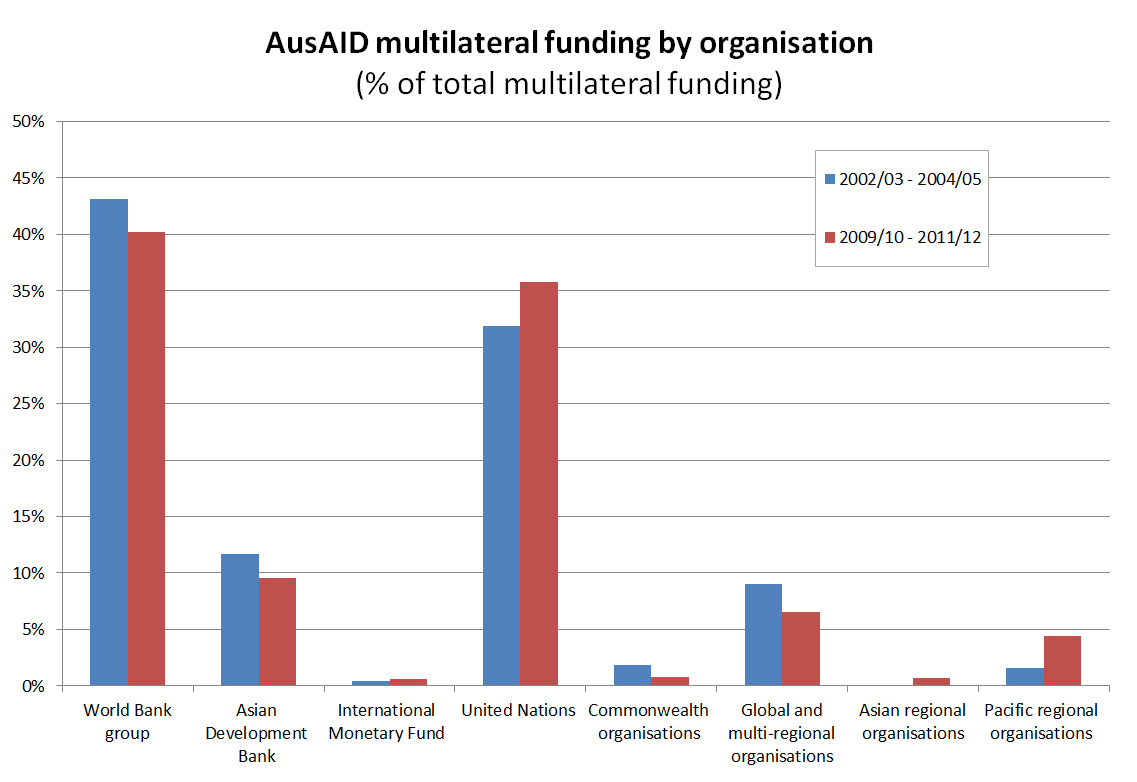 Note: A three-year average is taken to smooth out year-to-year volatility that emerges in the data from fund replenishments etc.

The World Bank Group has benefitted the most from the scale-up, to the detriment of the relative shares of the Asian Development Bank and the United Nations. In 2011-12 alone the World Bank Group received $764 million, making it by far the largest beneficiary of our aid out of all organisations and governments worldwide.

All of the above data is in relation to AusAID spending. This can be a bit confusing. AusAID gets about 85% of the aid budget. It gives about 5% of its funding to other government departments. But other government departments themselves get about 15% of ODA directly. We can combine these two amounts to get an estimate of the aid program implemented by agencies other than AusAID. 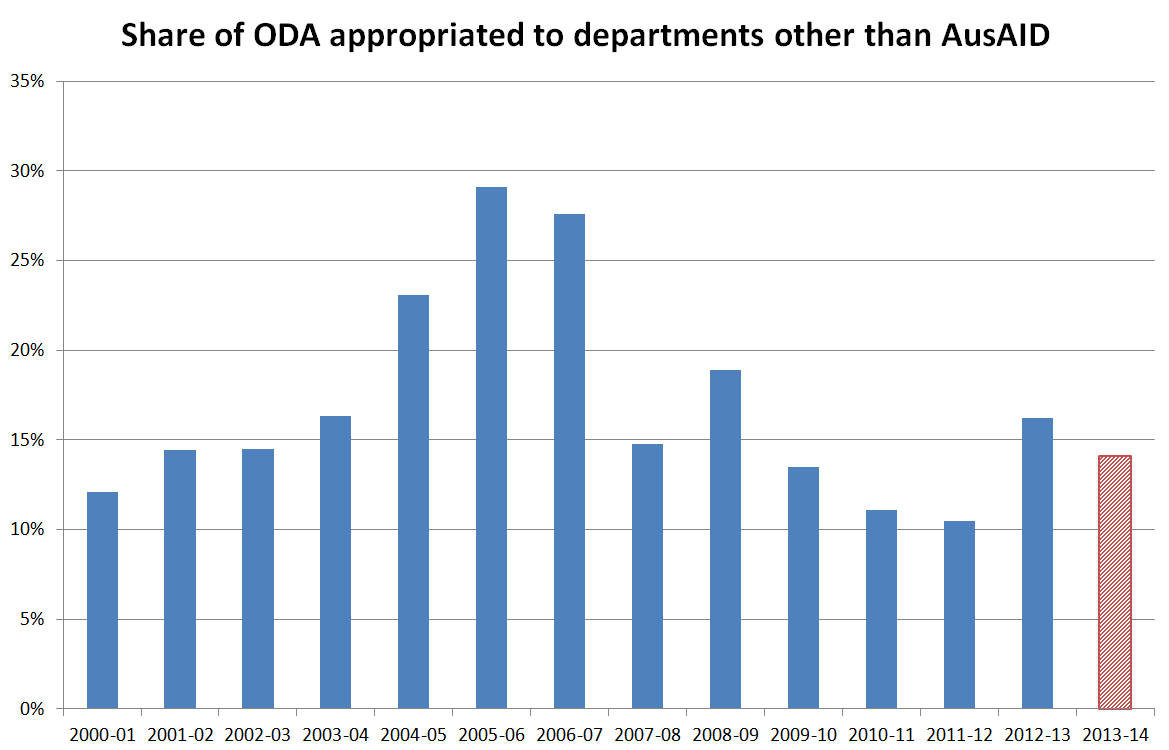 This is not a completely accurate picture, as some OGD funding may be passed on to multilaterals, or NGOs. But it is a good estimate. It shows no increasing trend in aid through other government departments which has averaged 17% between 2000-01 and 2012-13.

Parima Panpruet is an intern at the Development Policy Centre. Jonathan Pryke is a Research Officer at the Centre.