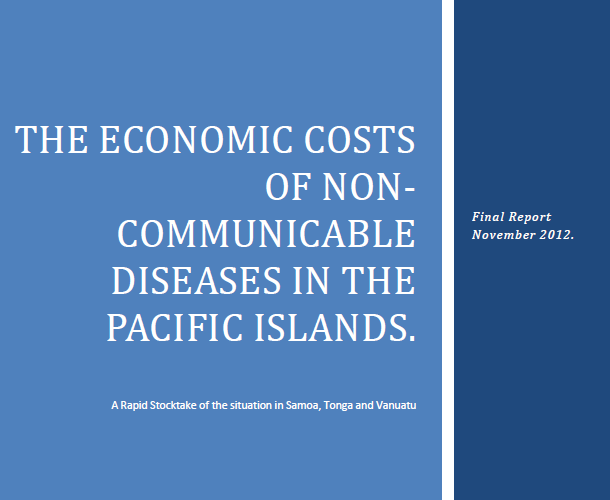 The economic costs of non-communicable diseases in the Pacific Islands

There are three main messages contained in the recently released World Bank report ‘The economic costs of Non-Communicable Diseases in the Pacific Islands: a rapid stocktake of the situation in Samoa, Tonga and Vanuatu‘ (available here [PDF]) (the report did not include analysis of Papua New Guinea).

First, Non-Communicable Diseases (NCDs) impose large health, financial and economic costs on developing countries, including those in the Pacific. NCDs, including heart disease, diabetes and cancer, are already the leading cause of death in 12 Pacific Island Countries for which data is available, frequently accounting for 70% of all deaths. Life expectancy in Tonga has fallen as a result of NCDs. Cardiovascular disease is the leading cause of death in the Pacific, often occurring at rates twice that of more traditional communicable diseases. Importantly, at least one quarter of NCD deaths are premature in Tonga, Samoa and Vanuatu, robbing families of relatively young mothers and fathers, and robbing the economies of potentially productive workers. Rates of premature deaths from NCDs in the Pacific are generally much higher than other lower middle income countries. NCDs also impose significant and growing financial burdens on Ministries of Health and Ministries of Finance. This is particularly significant in the Pacific where governments already finance – and provide – the bulk of health services. Glucose testing strips for a diabetes patient may cost only US$ 0.45 cents per day in Vanuatu. But used every day, as is required, this amounts to US$ 164 per patient per year, more than the total government expenditure on health per capita.

Second, risk factors in the Pacific are feeding a pipeline of potentially expensive-to-treat NCDs, but governments are already fiscally constrained in how much more they can provide to the health system. Each of the ten countries in the Pacific for which data is available have 60% or more of the adult population overweight, and in six countries more than 75% of adults overweight. In four countries of the Pacific at least half the adult population is obese. Over two thirds of people in Kiribati smoke tobacco daily. Only 5% of adult females, and 10% of adult males, were free of any of the preventable risk factors for acquiring NCDs in Vanuatu. But governments in the Pacific are limited in how much more they can provide to the health sector in terms of additional public financing. Governments have relatively limited “fiscal space” to expand expenditure on public health due to generally low and volatile economic growth, a small and shallow tax base, and competing demands from other sectors such as education.

Third, there are strategic responses available to Ministries of Health and Ministries of Finance that will benefit public health and public finances simultaneously. Many NCDs are avoidable — or their health and financial costs can at least be postponed — through good primary and secondary prevention. Financial costs to government, and health and social costs to patients, rise dramatically in often step-wise fashion if a diabetes patient has to move to insulin treatment or dialysis, or a person with high blood pressure has a stroke. Stabilising the conditions at earlier stages of the diseases through effective primary and secondary prevention is therefore a critically important, affordable, and often cost-effective strategy. Averting (expensive to treat) complications from NCDs, such as blindness related to stroke and diabetes, through good primary and secondary prevention aligns the objectives of public health and public finance simultaneously. Raising the price of tobacco in the Pacific is another example of a “win-win” for public health and public financing: decreasing the uptake of NCD inducing diseases through reduced tobacco consumption, whilst simultaneously raising government revenues.

A video discussion on the causes and consequences of NCDs in the Pacific Islands was recently organised by the World Bank office in Sydney, drawing on the report. The panel consisted of Dr Jimmy Rodgers, Director General of the Secretariat of the Pacific Community (SPC); Dr Temo Waqanivalu, Coordinator, NCD and Health Promotion, World Health Organisation; and myself, Ian Anderson, lead author of the report. The video discussion is available here:

Ian Anderson is a Research Associate with the Development Policy Centre. Ian was lead author of the World Bank report, ‘The economic costs of Non-Communicable Diseases in the Pacific Islands: a rapid stocktake of the situation in Samoa, Tonga and Vanuatu’.