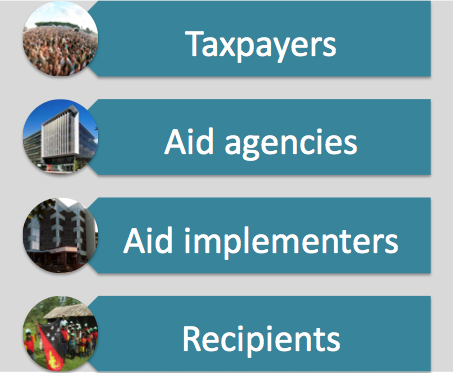 Crowdsourcing: The future of aid beckons

The long delivery chain of aid programs and a lack of feedback can lead to little accountability. How can technology and active stakeholders help to fix the feedback loop?

The long chain of delivery

The starting point for this article is the long delivery chain for aid programs.

In the delivery chain outlined above, there are a series of principal-agent relationships, which create and confound problems of missing and asymmetric information. This is summarised in nobel laureate Elinor Ostrom’s The Samaratan’s Dilemma. 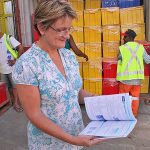 This is quite a complex set of relationships, so here is a practical example. This photo, from early last year, is for a project  to distribute 500,000 textbooks to 3,400 schools in Papua New Guinea. Australian taxpayers contributed funding for the textbooks, AusAID managed the procurement process for the books, and contractors delivered the textbooks. The press release described the process.

The containers arrived on two ships, one unloading its precious cargo in Lae and the other in Port Moresby.

From here the books will be sorted, with each primary and community school in the country receiving a set of 159 books.

‘This is a massive logistical operation,’ said [then] Acting head of AusAID in PNG, Robin Scott-Charlton.

‘Getting the books to PNG is the easy part. From Lae and Port Moresby the books will be broken into smaller amounts and sent to every provincial capital from where they will be distributed to all primary and community schools in each province.’

This was a year ago, so if all went to plan, thousands of PNG children will now have new textbooks paid for by the Australian public.

But how do aid agency and taxpayers know for sure that all the textbooks where delivered? (Note: This article is not suggesting that the books weren’t delivered, but is highlighting the imperfect information, or lack of feedback, on whether they were delivered.)

The key is to create a more ‘information rich environment’.

First, donor agencies can publish more and better information on how aid money is being spent. (For more on this see this blog post on aid transparency.) This enables both taxpayers and recipients to know how much funding is going to specific programs, who is implementing the program and what outputs to expect.

Secondly, donor agencies can get implementers to build in better mechanisms for monitoring and evaluation into their programs. This would include more independent evaluation and making reports publicly available.

Thirdly, donor agencies can nurture feedback from aid recipients. In the past, it was costly to send out teams to visit project sites and talk with beneficiaries, or to commission large scale surveys. But recent developments in mobile technology and web-based interfaces have dramatically reduced data collection costs and opened up information to broader audiences.

The remainder of the blog post focuses in these recent innovations and how they can be applied to the imperfect information problem outlined above.

An unlikely source of inspiration 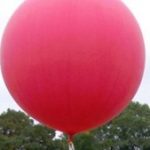 Last year, the US Defense department carried out an interesting experiment. They randomly placed 10 large red balloons across the United States and challenged teams to find them all. The one who found all 10 first would get $40,000. The winning team, at the MIT Media Lab, found all 10 balloons in 8 hours and 56 minutes. They used decentralized search through the Internet, spreading the message through web sites and social networks that there would be cash rewards to any chain of people that resulted in a balloon find. In the end, they drew on the efforts  of 4,665 people.

If this kind of approach – known as crowdsourcing – works for 10 balloons, then perhaps it could work for 500,000 textbooks or other aid outputs.

While the internet and social media are not yet ubiquitous in developing countries, over the last decade there has been stellar growth in mobile phones. According to recent data, there are about 6.9 billion mobile phone subscribers globally, of which 840 million are in China, 820 million are in South Asia and 500 million are in sub-Saharan Africa.

There are a growing number of initiatives that make use of mobile phones to monitor projects and to get feedback from beneficiaries. Here are just a few examples.

These are not isolated examples of the application of mobile phones to community monitoring and feedback. MobileActive is putting together a list of similar projects.

Here are just a few of the emerging lessons.

First, getting the process right is as important as the technology. For example ALINe – made up of staff from the Institute of Development Studies and Keystone Accountability – have put together some leading examples of how people have got feedback from intended beneficiaries and pulled together key principles for good practice in getting feedback.

It takes a paradigm shift in people, culture and spending habits … It’s not a population that understands the PC-web in the same way that you, me or anyone from the West does. It takes a different perspective, and a different type of entrepreneur… Many people claim that, “the future isn’t SMS” with too many limitations and a horrible cost structure. That might be true. However, it’s also the present reality.

Thirdly, while the examples above are based on mobile phones, other communication platforms are being used. For example, Maneno is a lightweight, multilingual blogging platform, built for Sub-Saharan Africa, and is being used to discuss donors and aid to the region. In India, volunteers are using video feedback to capture to the voices of the unheard on development projects. One of their videos reports on how funds for textbooks are being stolen in India.

The future of aid?

Many developing countries are making strides to connect communities through mobile phones and other technologies. This is an important opportunity for donors to fix feedback loops from recipients to implementers, donor agencies and taxpayers. As Owen Barder says,

With changing technology and attitudes, we seem to be on the brink of a revolution in getting information from prospective benefiaries of aid.

Once this tipping point is reached, will development aid ever look the same again?

Matt Morris is a Research Fellow at the Crawford School and Deputy Director of the Development Policy Centre.