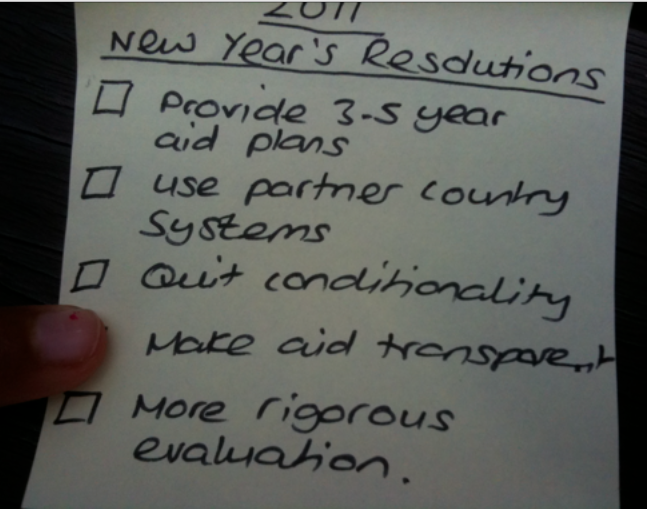 Aid transparency: The future of aid is changing

This is a guest post by Alexandra Beech from AidInfo – an organisation that works to make aid more effective by making the case for more transparent aid and better information standards.

Aid transparency is a hot topic at the moment, with widespread acknowledgement from governments and CSOs alike of the benefits it can bring in terms of delivering improved accountability, increased aid effectiveness and better value for money. The last couple of months have seen significant developments on the aid transparency agenda both internationally, and by individual donors.

The UK’s Department for International Development (DFID) earlier this year announced their Aid Transparency Guarantee. This signals a move towards proactive disclosure, announcing that in future, detailed information about all new DFID projects and programmes will be available online, and the information published will be “comprehensive, accessible, comparable, accurate and timely.”  The crucial thing here is that DFID acknowledges the importance of ensuring that aid information is published in ways that make it easily accessible and internationally comparable.

This is hardly surprising, since the UK is a signatory to the International Aid Transparency Initiative (IATI), and it’s in good company; 18 donors have signed up so far, Australia being one of them, with 15 countries having endorsed the initiative. Last month, the US government said that it expects to publish details of its aid programmes in line with the IATI standard, so that they are released in a form accessible to people in developing countries as well as their own taxpayers. And the EU Foreign Affairs Council has agreed that member states would publish details of their aid in an internationally comparable format.

Launched in September 2008, at the High Level Forum on Aid Effectiveness at Accra, this multi-stakeholder initiative is made up of a temporary coalition of donor governments, governments of developing countries and NGOs. It works to create awareness of, and implement, the Accra Agenda for Action commitments on transparency.

So what will all this achieve?

This is all significant news; it means that from next year, donors making up at least two thirds of aid to less developed countries will be publishing detailed, up to date information about aid through IATI. The first part of this new global standard was agreed in July this year. The UK, which together with Sweden and the Netherlands has played a leading role in this initiative, will have its first data online next month.  Many other donors, including the World Bank and the EC, will soon follow.

But it’s not just governments and large donors who are joining the parade. The Foundation Centre, for example, are already encouraging other large philanthropic foundations to publish their data in line with the IATI format, which is hugely significant for those seeking aid information.

In terms of what this means for increased access to aid data, the figures don’t lie. With USAID publishing data in line with the standard, the percentage of aid information (excluding debt relief) covered by IATI would go up:

And here is where we emphasise that IATI is not a database; integral to the initiative is the establishment of a set of common standards for the publication of aid information, which donors agree to report to. These standards will expand on those already in existence, such as those developed by the OECD-Development Assistance Committee (DAC).

IATI holds the promise of transforming foreign aid, by making it possible for everyone to access the information they need, to share that knowledge and contribute to it themselves.

Aid transparency in this guise has the potential to revolutionise aid as we know it. Owen Barder, the Director of AidInfo, sums up the case.

[Aid transparency] democratises aid, removing the monopoly of information and power from governments and aid professionals. It inspires innovation and informs learning. It reduces bureaucracy. It also makes it possible for communities to collaborate, for citizens to hold governments to account and for the beneficiaries of aid to speak for themselves.

With a new global standard for sharing information, aid in the information age will look very different from the past.