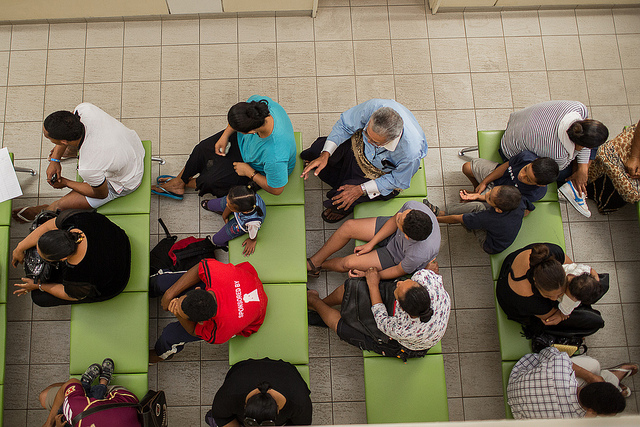 The global health threat hiding in the shadows

On 19 and 20 September 2011, world leaders convened in New York to get serious about addressing the world’s leading causes of ill-health, death and disability globally – non communicable diseases (NCDs), like cancer, heart disease, diabetes and chronic obstructive pulmonary (lung) disease. Despite accounting for two-thirds of all deaths worldwide, NCDs had hitherto remained in the shadow of other health challenges. This year marks the fifth anniversary of that gathering, known as the High Level Meeting, and provides an opportunity to take stock of progress over the last five years in addressing these diseases.

In most countries, over the period 1990 to 2010 NCDs became the leading causes of death and disability. Around three quarters of all people killed by NCDs live in the developing world and over 40 per cent of those deaths are of people under the age of 70. The burden of NCDs falls disproportionately on poor people.

NCDs generally share four key risk factors – tobacco, poor diets, harmful use of alcohol and physical inactivity – and they are mostly preventable. The impact of NCDs on populations around the world continues to evolve. For instance, in developing countries the prevalence of high blood pressure (a key cause of NCDs) has now overtaken that in high-income countries for the first time.

Despite this disease transition, NCDs have remained well under the global health and development radar. While three of the Millennium Development Goals specifically addressed public health, NCDs were absent – highlighting the gap between global disease burden and response, and serving to further focus attention and effort away from NCDs. Thankfully, the Sustainable Development Goals (SDGs) agreed upon 15 years later, in 2015, included NCDs. The SDGs aim to ‘ensure healthy lives and promote well-being for all at all ages’. Of nine specific health targets, three address NCD-related issues, including to ‘reduce by one third premature mortality from NCDs through prevention and treatment.’

There have been some other recent positive developments in global health governance. After years of being criticised for inaction on NCDs, the World Health Organization (WHO) has begun to move forward. In 2014, it established the Global Coordination Mechanism on NCDs, which aims to raise awareness, mobilise resources, coordinate activities and drive multi-stakeholder and multi-sectoral collaboration. WHO also convened an expert commission to establish what interventions are needed around the world to reduce childhood obesity and the tsunami of death, disease and reduced quality of life it causes.

These steps are necessary, but not sufficient. While the international agenda is shifting, increased practical commitment – as evidenced most concretely by funding for NCD related initiatives – is still lacking. In 2011, NCDs received only 1.5 per cent of health aid provided by bilateral donors, the UN, international NGOs, development banks and other parties. By 2014 this had grown slightly to 1.7 per cent, yet in 2015 only 1.3 per cent of health aid was directed to NCDs. Despite the 2011 High Level Meeting’s Political Declaration recognising that resources are not ‘commensurate with the problem’ and calling for funding increases by governments and donors, the percentage allocated to NCDs remains a tiny fraction of total health aid. The $475 million provided for NCDs in 2015 was, for instance, significantly less than the $1.2 billion provided for the far less deadly tuberculosis.

So what comes next? While high-level progress is being made, this needs to trickle down to countries, cities, communities and families. The global advocacy of the NCD Alliance – a civil society network established in 2008 that unites 2000 organisations – has been catalytic, as has the philanthropic leadership of Michael Bloomberg. But more is needed – from the poorest countries to the wealthiest – to bring key stakeholders together to advocate and drive collaborative responses.

Some powerful, yet basic realisations need to occur. A range of stakeholders need to recognise that over-nutrition is killing people and reducing quality of life across the developing world and prioritise it alongside more well-known manifestations of under-nutrition. They must also recognise that raising awareness about the harms of tobacco – whether in Cambodia, Cameroon, the Cook Islands or Colombia – has a vital role to play in fostering people’s good health across  the course of their lives.

Key to all of this will be continuing to break down the complexities of NCDs by emphasising that while these are a series of seemingly different disease groups, they are brought together by shared risk factors. And that these risk factors are fostered by ‘upstream’ factors like globalisation, urbanisation and ageing societies. It will also require a fundamental rewiring of a series of broken systems that are now making people sick across the world – food systems that can’t provide healthy nutrition, legal systems that do not adequately protect consumers or punish corporations who in making a profit make people sick; and health systems that just aren’t set up to address chronic diseases.

The inherent focus of the SDGs on sustainability offers hope, as turning around the tide of NCDs will require a shift towards sustainable cities, workplaces, and trade practices. The NCDs agenda needs to be understood as a prevention agenda, and not just as a matter of public health, but rather as a major global economic threat. Finally, transforming the perception of the NCD epidemic into a matter of social justice – rather than an inevitable outcome of an ageing, globalised world – has a central role to play in raising enough awareness and support to start making a dent in these diseases.

Sam Byfield is Senior Honorary Fellow at the University of Melbourne’s Nossal Institute for Global Health, and lectures in the prevention and control of non-communicable diseases. He has worked in international and national health policy for the past decade, and has broad experience across the Asia Pacific.