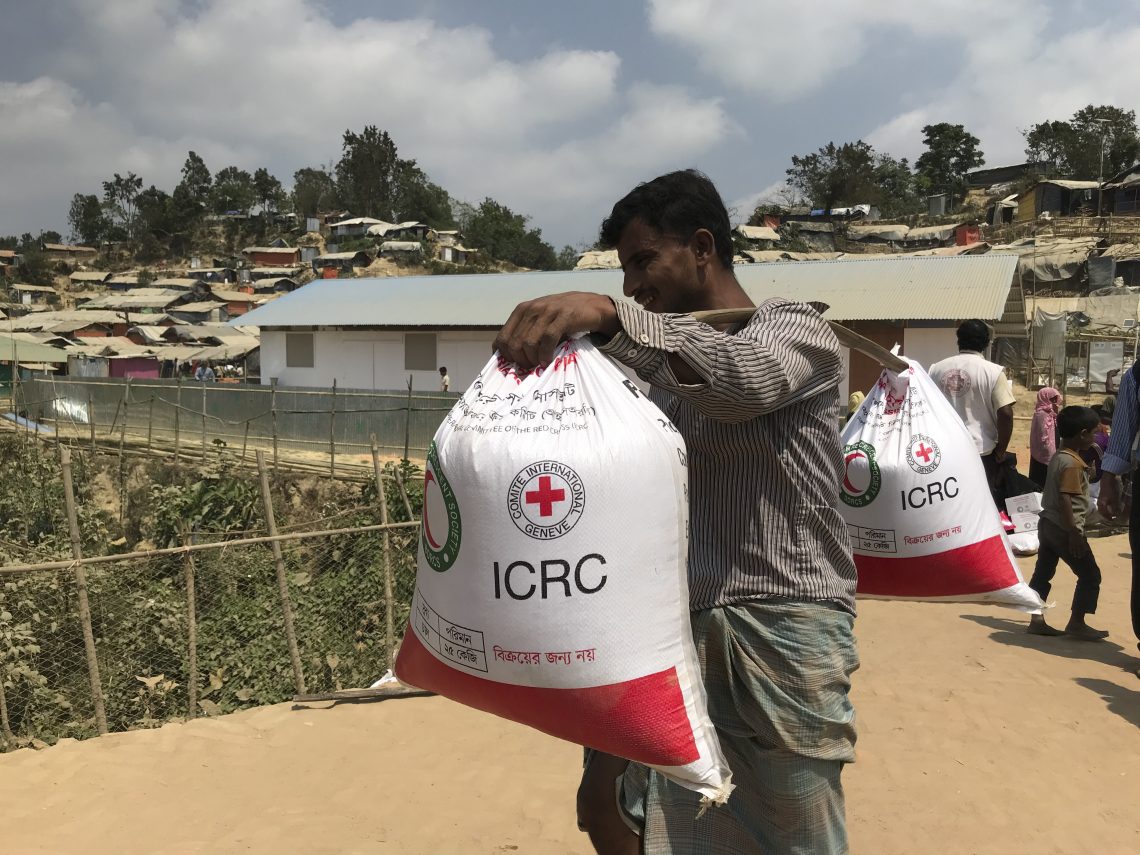 (International Committee of the Red Cross)

The international humanitarian response to COVID-19

The COVID-19 pandemic is having a tragic and overwhelming impact on fragile and conflict-affected countries. The humanitarian response to COVID-19 in these contexts has escalated many of the challenges long considered by the international community.

The United Nations’ emergency aid coordination body, the Office for the Coordination of Humanitarian Affairs, released its revised Global Humanitarian Response Plan (GHRP) on 17 July 2020. The GHRP aims to respond to the immediate health and multisectoral humanitarian needs in 63 countries. It highlights that COVID-19 is presenting unprecedented challenges for countries such as Pakistan, Afghanistan, Bangladesh and Syria – countries that are simultaneously dealing with high levels of internally displaced people and refugees, have fragile health systems and alarming increases in poverty levels.

In launching the appeal, the UN’s Emergency Relief Coordinator, Mark Lowcock, highlighted the large stimulus packages that the OECD and G20 countries have launched, estimated at US$11 trillion. In this context, he argued that a price tag of US$10 billion is not unwarranted to respond to the crises unfolding in humanitarian contexts.

The latest version of the Plan has an increased funding request of US$10.3 billion, an increase of nearly 50% on earlier versions, recognising the increased scale of need. It is the UN’s largest-ever appeal.

This is the plan’s third iteration, and it attempts to address some of the criticisms of early versions, including: limited funding going to local and/or international NGOs; a complicated UN subcontracting model delaying funds reaching frontline actors; and a lack of clarity between the various COVID-19 funding pillars.

Despite numerous commitments made by donors and the UN in recent years, the initial GHRP had no mechanism for NGO funding, with 95% of the total allocated to UN agencies. In April, the US-based alliance of NGOs, InterAction, reported that only 19.4% of its members had seen new UN funding. In June, the Center for Global Development, in a stinging criticism, reported that only 3% of the total funding from the GHRP at that time went to NGOs, of which local and national organisations received only 0.07%.

The lack of allocation to local and national NGOs was particularly puzzling as earlier GHRP response plans themselves provided quite extensive discussions around the important role of partnerships with civil society. In an attempt to redress this oversight, the revised GHRP now includes a supplemental allocation of US$300 million to bolster NGO rapid-response actions, beyond country-level requirements.

However, the US$300m is not a “fund” as such, and there is no dedicated pot to allocate grants to NGOs. Rather, it is a request for donors to fund into and incentivise existing mechanisms that prioritise funding to local responders. These include country-based pooled funds (CBPFs) as well as pooled funds driven by local NGOs, such as the Start Network’s Start Fund COVID-19.

Incentivising funding towards these rapid-response mechanisms is a useful approach to getting funds out quickly to local actors. But is it too little and too late?

Not only is the traditional humanitarian model of surging international personnel and supplies into humanitarian settings not an option in the context of the global shutdown of international travel, but as the response to Ebola highlighted, engaging local communities is key to stopping the spread of the virus. Lessons from epidemics time and time again identify that responding to outbreaks is closely tied to issues of community and trust and that local communities and institutions are best placed to promote and disseminate culturally appropriate preventative health measures.

To date, Australia has made a limited contribution to the GHRP, less than $5 million according to the UN, instead choosing to largely target its COVID-19 contributions to the Pacific region and Timor-Leste. Given Australia’s recent track record of good donorship and engagement in humanitarian contexts such as Cox’s Bazar in Bangladesh, and to the Syrian crisis, the limited additional COVID-19 funding to countries identified by the GHRP is surprising.

The Australian government has been a strong advocate for humanitarian reform both during, and subsequent to, the World Humanitarian Summit and Grand Bargain in 2016. Its Partnerships for Recovery strategy focuses on responding to COVID-19 in the Indo-Pacific region, but it also recognises the impact of the pandemic on humanitarian contexts and commits to working in ways that strengthen the international system’s effectiveness in responding to crises.

The new strategy also identifies localisation as a core theme that underpins all work. While its commitments towards localisation in the Pacific are starting to have some traction, it would be a lost opportunity for Australia not to leverage these conversations and advocacy into global funding and reform efforts.

The global COVID-19 pandemic is a crisis unprecedented in its scale and scope, with particularly dire impacts in fragile and conflict settings. The crisis has also highlighted the critical role of local and frontline humanitarian responders. Yet, as evidenced by the GHRP, the international system has been slow to respond and adapt.

With negotiations towards some form of a renewed Grand Bargain commencing, there is an opportunity for the Australian government to modernise multilateralism in the humanitarian sector. As a constructive and middle-level humanitarian actor, Australia has a key role in advocating for reform. But, for this advocacy to cut through, Australia also needs to make its fair share of contributions to humanitarian funding.