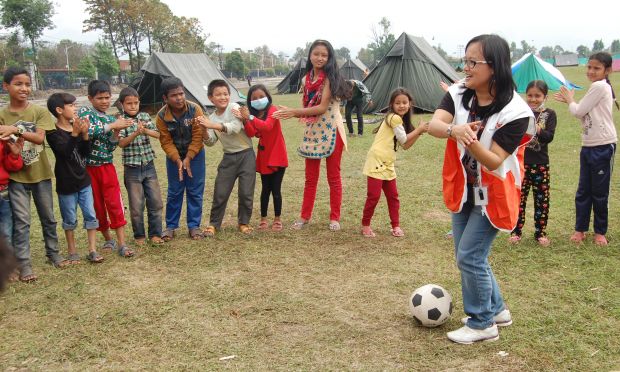 The invisible health challenge for aid and humanitarian action

With October being Mental Health Month, you may have been hearing more about mental health issues on television and in the news recently. Mental health is recognised as a major issue in Australia but very few people think of mental health as being a serious problem facing developing countries. No one denies that health is an essential component of aid and development work, and yet mental health – which forms part of the very definition of ‘health’ – is often invisible in government development strategies and handled with a degree of scepticism within the aid sector. But just as health is considered essential for aid and development, mental health should be regarded in the same way. With mental health currently on Australia’s radar, it’s important to understand the extent and impact of mental health challenges globally and recognise the need to mainstream Mental Health & Psychosocial Support (MHPSS) initiatives in our overseas aid and humanitarian programs.

A recent Foreign Affairs article [register to view] said that in low-income and middle-income countries and within international organisations, officials tend to view support for mental health as “a luxury that people living in severe poverty or amid violent conflict cannot afford.” In fact, those living in low- and middle-income countries are more affected by mental health issues than the developed world. In 2010 the World Health Organisation (WHO) found [pdf] that 75 per cent of people with mental disorders live in low- or middle-income countries, and less than one in ten receive any kind of mental health care. In 2010 the direct (such as spending on care) and indirect (such as lost productivity) economic costs of mental illness to the global economy were estimated at $2.5 trillion a year [pdf], a figure that is expected to more than double by 2030. Clearly this is an issue that developing countries and donors alike cannot afford to ignore.

While mental health responses should not be restricted to emergency programs, it is a good place to start. In the wake of the Syrian crisis, Nepalese earthquake, South Sudan, Darfur and Congo conflicts, and Gaza incursions, the social and economic costs of mental illness are only going to increase. People affected by crisis are commonly exposed to distressing experiences, including witnessing others being harmed, sudden grief, loss of home, livelihoods, or dignity, and for some, direct war atrocities or torture. Exposure to such stressors increases the risk of developing mental health problems [pdf] such as depression, anxiety, and alcohol/substance abuse. While health programs in emergencies typically focus on the short term – improving access to the core necessities of clean water, sanitation and medical care – MHPSS programs are also an essential part of assisting communities in the recovery process. Taking care of people’s mental health can strengthen and underpin traditional aid responses, leading to a better-functioning society and more productive economy.

In July this year, the Inter-Agency Standing Committee (IASC) Reference Group on MHPSS [pdf] asserted that ‘Mental Health and Psychosocial Support (MHPSS) considerations and interventions can have an added value for all aspects of the humanitarian response’. This is in support of the wider use of the IASC guidelines, which were published in 2007. The guidelines recommend preparedness activities before emergencies, implementing minimum responses during the acute phase of the emergency in 11 areas of humanitarian operations, and initiating comprehensive responses for long term recovery (or development) thereafter.

Today, many United Nations agencies and international NGOs integrate MHPSS into their emergency responses, including World Vision. For instance, World Vision implemented children’s programs using the Child Friendly Spaces model to support children’s psychosocial wellbeing in the wake of the Gaza incursions (2014) and Nepalese earthquake (2015). As part of the Ebola emergency response in Sierra Leone, World Vision is providing psychosocial support and referral for specialist mental health care via a focused home visitors program for children left orphaned or vulnerable and living in foster/extended family situations. In Sri Lanka, which has been affected by decades of violent civil war, World Vision operates REMIND – the Reconciliation Through Mental Health Integration in the Northern Districts of Sri Lanka. The project has improved the referral pathways for communities to access psychiatric support, provided direct community-based psychosocial assistance, and implemented mental health anti-stigma campaigns to normalise mental health concerns. Despite the sensitive nature of the MHPSS sector in Sri Lanka, the REMIND project has made significant progress in supporting the local population.

Considering the established links between poverty and mental illness, it’s vital that the Department of Foreign Affairs and Trade (DFAT) and NGOs alike recognise MHPSS as integral to humanitarian response and recovery programs. In particular, when allocating funding for humanitarian programs, DFAT and NGOs may consider prioritising support for 1) stand-alone programs aimed at addressing the MHPSS needs of affected populations; and 2) mainstreaming MHPSS across humanitarian response activities in accordance with the IASC MHPSS guidelines. DFAT does offer some support to MHPSS as part of child protection programs funded during humanitarian responses; however, mainstreaming mental health programs would fill shortfalls in Australia’s humanitarian responses. Although MHPSS is hardly mentioned in DFAT’s Health for Development Strategy or Humanitarian Action Policy, increasing support for this area would strengthen aid responses and contribute to poverty elimination by enabling more productive and socially cohesive societies.