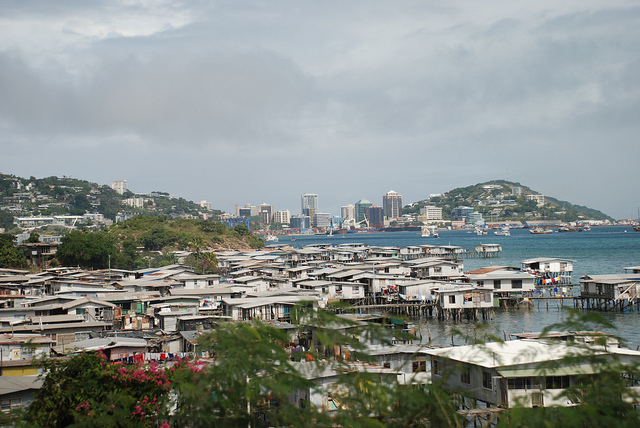 The political machinations of the recent meeting of Pacific Islands Forum Leaders dominated the media headlines over the last two weeks, with tensions around climate change and West Papua, as well as the future of Australia and New Zealand in the Forum, receiving considerable coverage.

A number of other important developments were sidelined in the media commentary as a result, including leaders’ decisions on three other agenda items: cervical cancer treatment, fisheries management, and ICT development. Importantly, the impact of the new Framework for Pacific Regionalism [pdf] on proceedings prior to and at the meeting has received scant attention, as has the Hiri Declaration. These are the focus of this post.

It surprised many the extent to which the Framework for Pacific Regionalism (the framework) flew under the radar at the leaders’ meeting in Port Moresby: the first time the framework has been in place. Although the framework itself did not receive much attention, it was its operation that created the agenda for what was discussed in Port Moresby.

The framework was developed as a result of the Review of the Pacific Plan in 2013, and aims to better focus PIF Leaders’ meetings by reducing the number of issues placed on the agenda for discussion. Its establishment, socialisation and implementation has been the paradigm for the Pacific Islands Forum Secretariat under the new leadership of its Secretary General, Dame Meg Taylor, and it is an agenda that she and her team have pursued with vigour. It is worth discussing the framework in some detail, given its implications for the outcomes of both the recent and future leaders’ meetings.

Three key objectives provide the underpinning of the framework:

This last point was emphasised in the opening remarks of Dame Meg Taylor to the Forum Officials Committee meeting, which preceded the leaders’ meeting. In her statement, Dame Meg Taylor stated:

“I reiterate the responsibility of this Committee, as articulated in the Framework and approved by Leaders, to ensure that ‘politically sensitive and major regional issues and initiatives are the focus of the Leaders’ meeting’.”

The operation of the framework has been both devised and rolled out since Dame Meg Taylor took over as Secretary-General. One of the most significant planks of its implementation is to provide an opportunity for a wider range of voices (whether individual or institutional) to contribute to determining how the regionalism project should be taken forward. Under the framework, the Forum Secretariat issued a call for public submissions of proposed regional initiatives in the lead up to the leaders’ meeting.

These were assessed by a newly appointed Specialist Sub-Committee on Regionalism (SSCR), and five were selected for the consideration of leaders, on the basis of a series of tests. These tests ensure that proposals considered by leaders are requiring of a regional approach, generate net benefits, and do not impinge on sovereignty, the market, or duplicate existing activities. The SSCR process is key to the new framework, and is important to meeting all three underpinning objectives identified above.

What was its impact in preparation for the leaders’ meeting and in Port Moresby?

The SSCR process has been successful in broadening the conversation on regionalism this year. The process has generated considerable public interest, more than was expected, with a total of 68 submissions received from NGOs, regional bodies, universities, CROP agencies, and Forum member country governments. The SSCR referred a number of these to appropriate ministerial meetings for decisions as envisaged by the framework, again as a way of ensuring that the leaders’ discussions were focused on only those issues that would be in line with the underpinning objectives. (These were a joint position on climate change, West Papua, a regional response to cervical cancer, better fisheries management, and ICT development).

Assessment of these proposals against the various tests was designed to ensure that proposals had a clear rationale. It is hard to judge the impact of these tests as the basis for the SSCR’s decision on the five proposals presented to leaders were not made public (although the Secretariat has published the template [pdf] that was used to review submissions prior to their consideration by the SSCR). Indeed, very little detail was provided about what was actually placed on the agenda of leaders. This has detracted from achievement of the first aim, and is discussed more below.

The third objective, to ‘bring back’ the political dimension of regionalism, was certainly achieved at the recent Forum Leaders’ meeting. This was in part due to the SSCR process, which both selected topical issues and limited leaders’ discussion to five agenda items, thereby facilitating discussion (To put this in perspective, the communiqué [pdf] from last year’s meeting reflects a much more unwieldy agenda). However, the context within which the meeting took place, in the lead up to the UNFCCC negotiations, was no doubt also a factor.

So, what should we make of the meeting? And what was the impact of the new Framework for Pacific Regionalism?

There can be no doubt that the leaders’ meeting focused on matters of political importance. (In turn, the Hiri Declaration replaces the 2004 Auckland Declaration as the basis for political support for the regional project, and includes specific mention of the Pacific Islands Forum and the Framework for Pacific Regionalism.)

Somewhat ironically, it was the very success of the framework in ‘bringing back’ politics that highlighted differences between Forum member states on key issues. This was most evident in the rift between Australia/New Zealand and Forum island countries on climate change. But it was also evident on West Papua, with countries like PNG opposed to the more assertive recommendations of countries like Solomon Islands. (It is worth noting that some other potential subjects for discussion that are equally controversial were not included in the agenda, such as the worrying political developments in Nauru).

The other agenda items discussed by leaders were less controversial. One suspects that some, such as the cervical cancer initiative, were selected at least in part due to their potential for implementation. But agreement on specific actions in these areas was required for these initiatives to be considered a positive outcome at Port Moresby. The only area where this occurred was fisheries management.

On the issues of both ICT and cervical cancer the Forum Leaders’ communiqué was vague. The reasons for this are difficult to establish, given that the background material provided to leaders is not publicly available. It is possible that not enough effort was made in preparing detailed proposals for leaders. The fisheries proposal was different in this respect, as a plan had already been developed by fisheries agencies and required only approval by leaders. An alternative explanation is that a conscious decision was made to keep the subject matter general, in order to first gain leadership approval to develop proposals. In either case, it was a mistake not to develop detailed proposals for the initiatives, given longstanding criticisms of regionalism as not sufficiently action-oriented.

The framework worked well in other areas. Observers at the meeting have told us that the discussion was more substantive than in previous years, in which the agenda had been too crowded. The framework also attracted the interest of the public, reflecting a continuation of the high level of public engagement observed during the review of the Pacific Plan in 2013. This will help to addresses past concerns about ‘capture’ of regionalism by CROP agencies. The first ever meeting of civil society organisations with the Troika (the current PIF chair, outgoing PIF chair and incoming PIF chair) also addressed such concerns. Previous claims that the Forum excludes civil society (unlike the Fiji-sponsored Pacific Islands Development Forum) are now hard to justify as a result.

There is room for improvement in this area, however. Despite the public submission process, there was a lack of transparency with respect to what was discussed. Civil society organisations that attended the meeting were provided with a list of broad themes for discussion, but not the actual proposals considered by leaders. It remains unclear on what basis the SSCR made its decision to select the five agenda items for leaders (no documentation has been released). The process could therefore be improved, and hopefully will be in the future.

In our view, therefore, the new Framework for Pacific Regionalism went some way in achieving its objectives, notwithstanding the weak communiqué and political tensions surrounding the Forum Leaders’ meeting. The framework has made conversations about regionalism more inclusive, although there is room for improvement. It may have improved the process for consideration of regional proposals, although the lack of transparency highlighted above makes this difficult to judge. Again, there is considerable room for improvement in this space.

Most significantly, the framework recognises the reality that regionalism is inherently political. This is a positive, given the problems associated with the technocratic Pacific Plan. A more political approach will help to ensure that future strengthening of the regional architecture has a more solid foundation. However, this does not mean that strengthening regionalism will be any easier. The tensions observed at Port Moresby were a stark reminder of this.