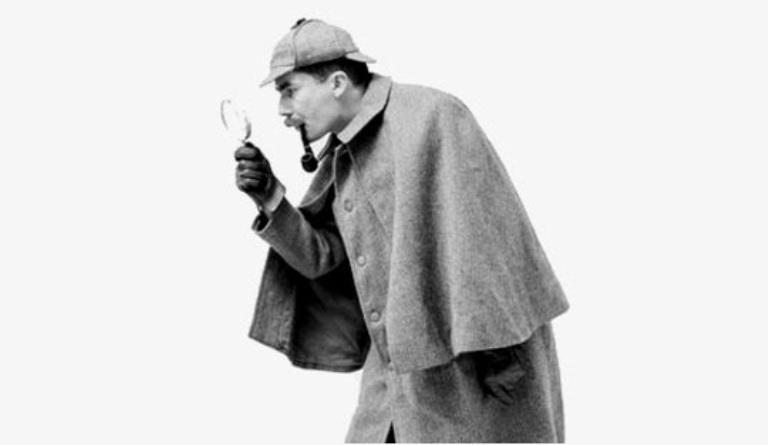 The mysterious case of the vanishing budget emergency

A year ago the budget was in emergency. Debt and deficits continued as far as the eye could see. In this time of crisis hard decisions had to be made. This paved the way for a 20% cut to aid spending in 2015-16 and by 2016-17 the largest multi-year cuts to aid spending ever: 33% relative to 2012-13. By 2018-19 the Australian aid budget will be the least generous ever, representing an average of just 0.21 cents out of every dollar of income earned in the country.

However, in a remarkable turnaround, the focus of this year’s budget was less about ending the age of entitlement or addressing the budget emergency but on increased spending (national security, defence, rural and Northern Australia, and childcare) and rather generous concessions to small business. What happened to the budget emergency?

I have three possible explanations. First, despite this year’s budget deficit blowing out by $18 billion, or more than double compared to the forecast a year ago, the debt and deficit problem has actually been solved. Second, there was never a budget emergency in the first place but the idea was concocted to redistribute spending away from seemingly low priority areas, such as Australian aid. Third, the budget still has unaddressed structural problems but overly optimistic economic assumptions are giving the impression that the emergency situation has been resolved.

There are no prizes for guessing that the Treasurer would back the first explanation. He announced on Tuesday that the path back to surplus was clear and credible and the time to achieve this was unchanged from last year, despite the loss of $50 billion in expected tax revenue (over forward estimates from the previous budget) and spending reforms held up in the Senate.

If so, has the government achieved this through reduced spending? The answer to that is a clear no. The aid cuts, for example, only reduced the estimated 2015-16 deficit by 2.7%. More compelling is that when comparing projections from previous budgets, overall government expenditure in this budget is higher than in last year’s, which in turn is higher than in Labor’s last year in government (see Figure 4 here). Figure 1 shows that projected spending as a share of GDP has increased significantly compared to last year and, in terms of demonstrating spending restraint, the projections under the Coalition are not a substantial improvement over the actual spending outcomes achieved under the last Labor government. It is clear that the cuts to aid were really a reprioritisation of spending rather than a concerted effort to reduce the deficit.

Figure 1: Actual and projected government revenue and spending as a share of GDP 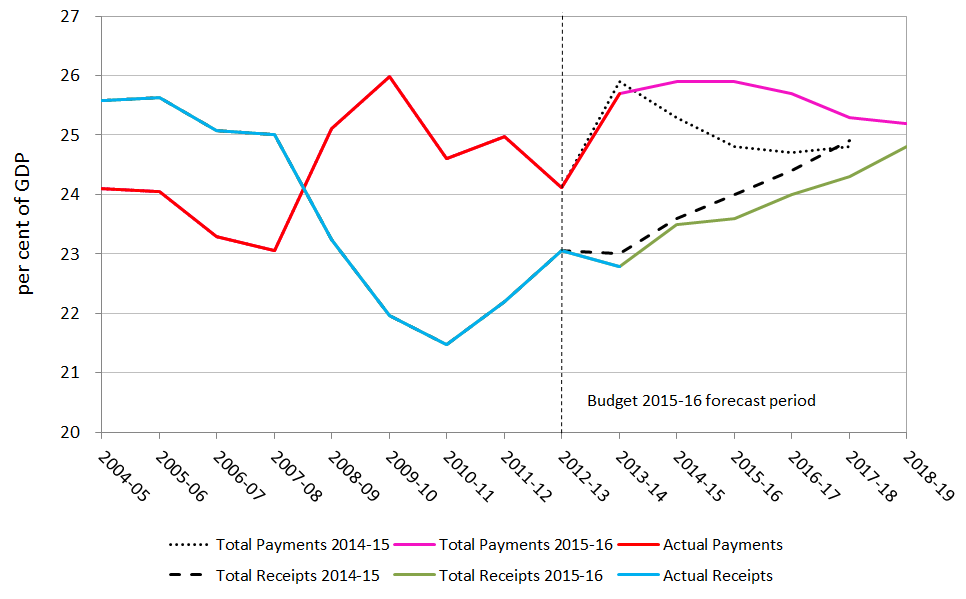 Has the budget emergency been solved through tax reform or new revenue raising measures? The answer to this is also no. Lower iron ore and other commodity prices have hit government revenue hard in recent years but it is exactly during tough times like these, particularly in the 1980s, 1990s and 2000s, that reforms have been made to improve the efficiency of taxes and wind back overly generous tax concessions. In this year’s budget, around $10 billion or more could have been added to revenue through a reduction of generous concessions to superannuants, wiping out almost a third of the deficit. Yet this option was not adopted. The temporary budget repair levy announced in last year’s budget raised around half a billion dollars but this too could have been broadened to reduce the deficit further (currently it only applies to individuals with personal income over $180,000). It’s not even worth mentioning the revenue foregone by dumping Labor’s “carbon tax”.

If the government really hasn’t done much to tackle the deficit problem then how is it that the projections show the budget on a path to surplus? As Figure 1 shows, the return to surplus is primarily driven by substantially higher revenue receipts, which in turn is underpinned by nominal GDP growth shooting up from 1.5% this financial year to 5.5% in 2016-17. In other words, additional tax revenue from wages growth (and associated “bracket-creep”) is expected to get the budget out of trouble.

If doing nothing, or at least not much, is the solution to the budget emergency then perhaps there was never one in the first place. This has an element of truth based on the relatively small size of the deficit and government net debt (1.9% and 16.7% of GDP in 2015-16, respectively) compared to other developed countries. From this viewpoint the cuts to aid are particularly harsh and have little justification.

However, the problem with expectations that nominal GDP growth and higher revenue will solve the budget’s problems is that these expectations were built into previous budgets and they never materialised, and the deficits persisted. Figure 2 shows that there is a strikingly similar pattern to the projections of the budget deficit over the last three budgets and the most recent Mid-Year Economic and Fiscal Outlook (MYEFO). Why should we believe that this latest projected path back to surplus is any more credible than previous ones? So, in my view there are structural problems with the budget that are not yet resolved, and these problems are going to get worse as the effects of an aging population hit the budget in years to come. The latest Intergenerational Report (IGR), for example, projects federal government health spending as a share of GDP to increase from around 4% to 5.5% over the next 40 years (but this is arguably too low; previous IGRs projected up to an 8% share), which would increase the share of health spending in the budget from around 16% to 21%. This increase alone is more than five times the current share of the aid budget. Increased spending on the aged pension will also crowd out the aid budget.

In conclusion, a (really) credible path back to surplus is required to put the budget in a position to weather the oncoming difficulties of demographic change. Singling out the aid budget for massive cuts is not the answer: tax reform and measured restraint on government spending across the whole portfolio is. Failure to find a solution will put more pressure on future governments to cut low priority spending programs. Let’s hope aid doesn’t fall into that category.