The NZ pathway: how and why Samoans migrate to Australia – part two

A clue as to the reason behind this massive indirect migration is contained in the next graph, which shows average remittances to Samoa per migrant from the main diaspora countries. Clearly, Samoans in Australia remit an increasingly larger amount per migrant than Samoans in New Zealand. In 1995, the amounts were about the same, but now per capita remittances from Australia are about two and a half times as big as from New Zealand. Pacific islanders migrate in part to remit, but presumably higher remittances also suggest a higher standard of living. Perhaps more skilled migrants are more likely to move from Australia to New Zealand, but the graph does suggest that there are economic drivers behind the indirect migration to Australia via New Zealand.

Figure 5: Per capita remittances from major destination countries for Samoa (US$, 2019 prices) 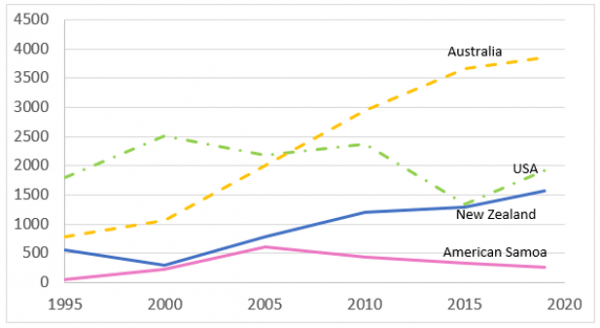 Samoans who are New Zealand citizens but living in Australia are not permanent residents. However, as New Zealanders in Australia they do get several benefits, including: family assistance, the old-age and disability pensions, Medicare, free schooling, and the JobKeeper payment (during COVID-19). If they have been in Australia long enough (ten years), they have access to HELP (interest-free loans for tertiary education) and some unemployment benefits. Only those who arrived before 2001 have access to the NDIS. (See here for details.)

From a policy point of view, Australia, via its visa-free travel agreement with New Zealand, is providing preferential migration treatment for Samoa. And not only Samoa, but, as the graph below shows, Fiji, Tonga, Cook Islands and Niue. Though Samoa is the dominant user: for the period shown, 58% of all Pacific Islanders coming to Australia via the New Zealand pathway were Samoans. Many more Fijians migrate to New Zealand through skilled pathways: they presumably do well in NZ, and so the economic imperative to uproot again is weaker. Tongans, like Samoans, migrate to New Zealand using mainly unskilled visas, but fewer Tongans migrate to New Zealand and, for whatever reason, a lower share make the onward journey to Australia. 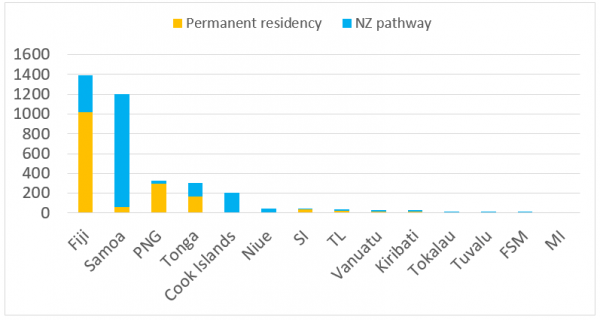 The countries that have preferential or open access to New Zealand are to be congratulated for taking advantage of it. It does seem though that Australia has outsourced its Pacific migration policy to New Zealand. What about those Pacific countries that don’t have special access to New Zealand, and that are in much more need of migration opportunities, in particular PNG, Solomon Islands and Vanuatu? We should as a country be taking a much more strategic approach to Pacific migration, and open up a Pacific window into Australia’s permanent migration regime.

This is the second blog in a two-part series, read the first post here.

[1] Estimates (used in Figures 1,2,3 and 5) published by UN Department of Economic and Social Affairs may include children of first-generation migrants. See p.12 of this document.
[2] To calculate the increase in permanent migrant stock for Australia, the annual average increase in Samoan migrants in Australia between 2013 to 2018 was calculated using ABS data on migration from place of birth. The average number of (family and skilled employment) permanent resident visas granted by Australia between 2014 and 2018 is derived from information from data from the Australian Department of Home Affairs. (Figures indicated to be ‘<5’ are assumed to be 5 for calculation purposes.) These data are used in Figure 4, and count only those born in Samoa. The same method is used to count temporary migrants (figure given in text but not shown in table). The same source is also used to report the number of Pacific-island-born who moved to Australia as New Zealand citizens (under a “non-program” migration category) – these are the data for Figure 6. The average number between 2013 and 2017 of 1,141 is almost the same as our estimate of 1,139, though for a slightly different period. Finally, our estimate of direct permanent migration from Samoa to Australia (average of 49 from 2014 to 2018) is an over-estimate since the data shows that a few of these who gained PR first arrived in Australia as New Zealand citizens.
[3] For New Zealand, the average annual increase in migrant stock was calculated using NZ census data by subtracting the 2013 Samoan migrant stock from the 2018 stock and dividing the result by five. The average number of permanent resident visas granted by New Zealand is the average calculated for the period between 2012/13 and 2016/17 using information from Table 3 of this report. Again, the data is by birth place.
[4] The alert reader might notice that in Figure 3 the absolute rate of increase of migration to Australia is higher than to New Zealand, but in Figure 4 they are about the same. Figure 4 uses national data, and Figure 3 UN. One difference is that the UN but not the national data includes second-generation migrants for both Australia and New Zealand.