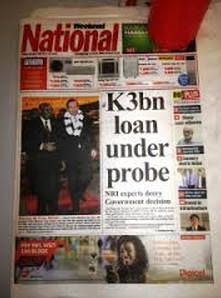 The recent decision by the Executive Government to borrow K3 billion from the international bank UBS to purchase a 10.1% stake for the state in Oil Search Ltd continues to generate public debate, mainly against it, including by learned commentators via various media outlets, despite the Prime Minister’s defense that the loan and purchase is good for the country.

The significant implications of this deal for the national economy and the associated welfare implications have compelled us to make our own assessment.

From the outset, we want to state categorically that this deal will have momentous implications for the national economy which will be felt by millions of people across many generations in the ensuing years in PNG. We draw on information which is in the public domain for this analysis.  We particularly draw on past experiences to inform us in our analysis. Lessons from the past are too significant for one to ignore, especially the present Government which seems to be committed to this deal.

The K3 billion loan to fund the state’s stake in Oil Search Ltd was sought and approved by the Executive Government, outside of the country’s prudent fiscal management laws and the 2014 National Budget. Given the large sums of money involved and the implications it will have on the 2014 budget (and subsequent annual budgets via loan repayments), Parliament remains the sole authority to approve this transaction.

Using Petromin, a technically bankrupt state owned company, as the vehicle for channeling this loan is inappropriate. Further, it needs to be noted that it is not Petromin’s revenue that will be used to repay this huge loan. It is the LNG revenues that are being mortgaged in this deal.

Increasingly, it is becoming obvious that the securing of the loan did not follow prudent fiscal management processes.  It is outside of the ambit of the National Constitution, the Public Financial Management Act, and other legislation which promote prudential public financial management, including the Sovereign Wealth Fund legislation approved by the National Parliament in 2012.

The Parliament of PNG remains the legitimate authority on all expenditures outside of the annual budgetary appropriations. This deal is legally flawed and therefore illegal.

2. Direct state commitments are against the spirit of the Sovereign Wealth Fund

The up-spending and financial commitment of the LNG revenue by the Executive Government undermines key legislation and mechanisms that are in place to promote fiscal discipline and ensure prudential management of public finances, namely the LNG revenue. In particular, the fore-spent and financial commitments by the Executive Government of large revenues, including the case of the K3 billion UDS loan, as collateral is in anticipation of the LNG revenue. This seriously contravenes the principles governing the use of the LNG revenues under the auspices of the Sovereign Wealth Fund (SWF) legislation approved by the National Parliament in 2012. Such behaviour undermines the credibility of national institutions established to ensure prudential public financial management. More importantly, this provides for opportunistic behaviour in the looting of revenues. The structural setup resembles the looting of the Mineral Resources Stabilisation Fund during the late 1980s, the Coffee and Cocoa Stabilistation Funds et cetera. The Organic Law on SWF was proposed basically to prevent the Executive Government to access such funds and subject the Executive Government to seek approval of Parliament. This has not happened now and history may repeat itself. This process will render the SWF an empty shell.

Related to point two (2) above, an estimated K4 billion – K6 billion is being fore-spent in anticipation of the LNG revenue flows. This amount includes the previous IPIC (International Petroleum Investment Company) and the current UBS loans, both of which have similar structures. This is money spent upfront in anticipation of the LNG revenues.  The Executive Government has to be very careful on such ambitious public spending because the consequential implications are significant.

History may repeat itself again given our experience of the early 1990s, as such spending behaviour by the Executive Government created the country’s financial crisis of the 1990s. Expected revenues from the Porgera, Kutubu, Misima and Lihir mines, which were forward spent in an expansionary fiscal policy framework, dried up the coffers of the government, which triggered the financial crisis. This crisis had a significant dent on public finances, and crippled the national economy, having a serious negative impact on the welfare of the PNG people. The trigger for this crisis was the delayed flow in revenue from the three mines and Kutubu, lower revenues than projected and blown up costs of expansionary expenditure projects.

The core elements, borrowing upfront by mortgaging LNG revenue resemble the repeat of the actions that triggered the financial and economic crisis of the 1990s, whose impact lasted more than a decade. Commentators to this day describe this as the ‘self-inflicted wound’.

We spent upfront in anticipation of the petrodollars which eventually disappeared into thin air. Are we self-inflicting again?

In this case, the Bank of PNG (Central Bank) appears to have been conveniently used to legitimise the deal. In particular, the media reports that the Central Bank was used to justify the K3 billion loan, although private consultants seems to have been heavily used to perform substantive tasks to secure the loan compromises the independence of the Central Bank.

The NEC appears to have failed to undertake due diligence, especially in taking advice from the State Solicitor. Parliament was completely ignored. Petromin was conveniently used despite it being a technically bankrupt state-owned company. The Organic Law on the Sovereign Wealth Fund was completely ignored. Overall, domestic institutions were either ignored or were used as mere rubber stamps to cement this deal.

Some of these domestic institutions had gone through hard reforms in the last decade to reach the status they are in today, especially to be independent from political interference. The “independent” nature and status of these institutions has to be respected. They need to be consulted meaningfully and constructively to seek their independent and often credible advice on such issues of national importance. The country would not want to revert to the pre-2000s era when almost all the key public institutions and agencies in the domestic (financial) sector came under the direct control of the Executive Government. This practice must stop as hard gains made through painful reforms can be unraveled just by the interference of the Executive Government.

5. The state should refrain from direct involvement in business enterprise

Finally, and more importantly, the state should focus on its core business of providing public goods and services, providing overall management and regulation of the economy, and facilitation of PNG business ownership and not state ownership. State ownership of business has proven to be a failure in this country. The state-owned enterprises (SOEs) are in fact a drain on the national economy. They are collectively like leeches sucking resources out of the public coffers both directly, by continually obtaining state funds, and indirectly, by the inefficient delivery of their core services.

It is argued that the K3 billion loan sought was essential for the state to participate in the gas and oil business in the country. However, apart from the issues highlighted earlier in this article, the loan engages the state in business activity in a sector that is widely described as lucrative, but speculative, and more importantly, as an “enclave” with very little linkage with the other important sectors of the economy that the country depends highly on for jobs and income for individuals and families such as agriculture, fisheries, and other productive sectors of the economy.

The state’s involvement in business undermines its important role as a facilitator and regulator of the economy. The state should engage in and/or focus on activities that will enhance the economy through pursuing structural reforms. For example, reforms to make SOEs more efficient and profitable, introduction of competition in key sectors of the economy by promoting small to medium enterprise development (which it has commenced), and reforms and further efforts to unlock land for development. Such reforms are long overdue and much needed to make the country cost-efficient, productive, and broaden the base of the economy. State involvement in business has, among other things, resulted in and contributed to a wastage and misallocation of scarce public funds, inefficient/unprofitable SOEs, high prices of basic goods and services, and compromises on environmental standards and human rights, for example in mining.

If the objective of government is to maximise PNG’s share from the exploitation of its natural resources, the focus should be different. The emphasis should be on exploring innovative ways to increase PNG participation in the resource companies directly, rather than indirectly through state ownership. The latter has failed to deliver on the promised bonanza and history is more than likely to repeat itself under this deal to take a stake in Oil Search Ltd.

In fact, the real winners will be the Oil Search Ltd Shareholders, the UBS Bank, and the consultants and middlemen who took cuts in facilitating the deals. Papua New Guineans will wait for their bonanza from the LNG, which may not be delivered in this life for many. Maybe in the next life.

In conclusion, it is our view that the K3 billion UBS loan deal to buy a stake in Oil Search Ltd is not good for the country. We have highlighted some key reasons above and our knowledge of the past experiences lends us strong support.

This deal will have serious fiscal and ongoing economic repercussions for the country. We therefore do not support this initiative for the state to buy a stake in Oil Search Ltd  nor do we think the state’s direct involvement in business in the economy is a good idea if PNG is to become a low-cost, efficient, business friendly environment that can realise broad-based economic growth that will create jobs and incomes for individuals and families.

The state should look at innovative ways for increased PNG ownership directly by the people in companies such as Oil Search Ltd, and not indirectly via the state’s involvement in business. It is important that we build up PNG businessmen and women, but not highly inefficient and unprofitable SOEs that will continue to drag the country’s economic growth prospects.

Finally, the state’s involvement should be limited to the provision of public goods and services, creation and facilitation of private sector-led growth, investment in key public infrastructure, reforms to make the economy business friendly, the pursuit of key structural reforms, and provision of overall economic regulation.

Dr. Charles Yala is an Associate Professorial Fellow, Dr. Osborne Sanida is a Senior Research Fellow, and Andrew Mako is a Research Fellow within the Property Sector and Economic Policy Research Programs, respectively, at The National Research Institute.

Charles Yala
Dr Charles Yala is the Director of the PNG National Research Institute. He has a PhD from ANU. His research focuses on the economics of land tenure, customary land tenure reform, development planning, competition policy and economic reform.