The other scale-up: Australian public donations for development over the last decade

The significant increases in Australian government aid over the past decade have been well publicised. Australian official aid or Official Development Assistance (ODA) has increased from $1.8 billion in 1999/2000 to a budgeted $5.6 billion this year. Less well known is the very large increase in the size of donations to Australian development NGOs over the same period. At a total of $896m in 2010/11 (compared to ODA of $4.3 billion in the same year), this is a smaller but still significant source of funds for international development.

This post analyses the recent growth of Australian public donations to development NGOs. It also compares the level of and growth in donations across these NGOs. The definition of “public donations” includes bequests and both monetary and in-kind donations. The Australian government also provides significant funds to Australian NGOs in the form of grants, but these, as well as grants from other sources including overseas, are excluded from this analysis.

Ideally, we would like to measure the funds raised by all NGOs who obtain tax deductibility under the Overseas Aid Tax Deduction Scheme, since such NGOs have been assessed to be supporting “activities focused on development and/or relief.” In practice, we are largely reliant on data collected and published by the Australian Council for International Development (ACFID), the umbrella body for Australian development NGOs. Nearly all of Australia’s major development NGOs are members of ACFID. The number of ACFID reporting members fluctuates, but in 2009/10, for example, there were 107 member organisations that reported receiving donations. There are two large development NGOs with tax deductibility that are not ACFID members: Compassion and MSF, respectively Australia’s second and fourth largest development fund-raisers.  Information on public donations to these two organisations is also included in the analysis below.[1]

The total donations to NGOs over time are shown below, both in current dollars and in 2010/11 dollars, to adjust for inflation.

The amount of donations has more than doubled in real terms over the time period shown, with a significant spike in 2004/05 in response to the Boxing Day Tsunami in 2004. Following this, donations did not fall back to their previous level, but growth has been slow and donations have gradually returned to their previous trend.

Annual donations to development NGOs per person have more than doubled in real terms since 1999/2000 and are now at about $40 per person.[2] This is a small amount relative to other expenses: less than half of the amount we spend on pet vet services,[3] but a big improvement on where we were a decade ago. 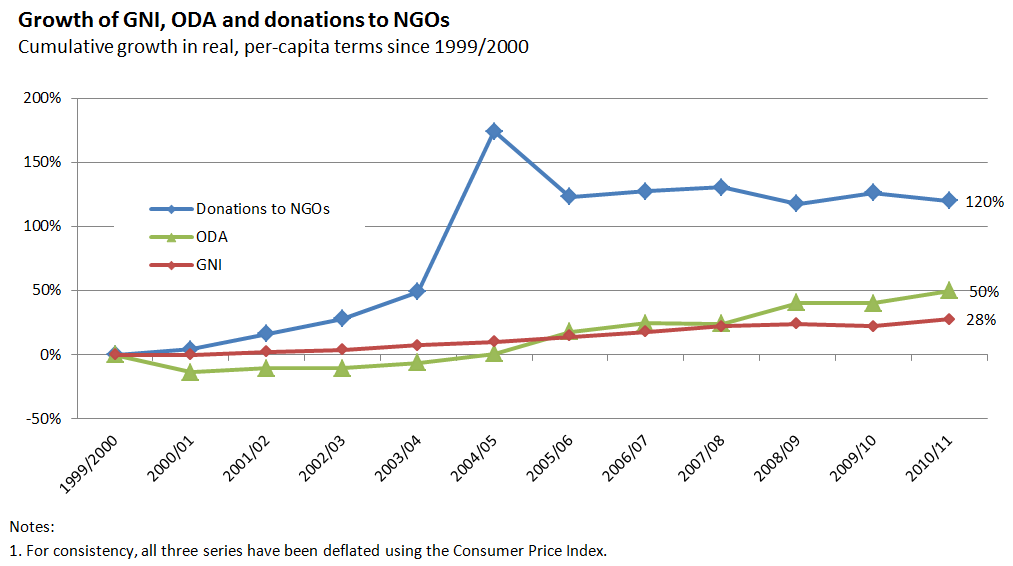 The distribution of funds among development NGOs

The most striking feature, shown in the next graph, is the domination of the sector by World Vision Australia. Over the decade under consideration, this one NGO has consistently received in the vicinity of 30-40% of all donated funds, over four times larger than the NGO with the next largest share in 2010/11. Nevertheless, it is notable that World Vision Australia’s share has started to decline, and at the end of 2010/11 was at its lowest level for the period shown below (33%), down from over 40% in 1999-2000.

The next graph shows how the individual shares of the other 14 NGOs have changed over the decade. 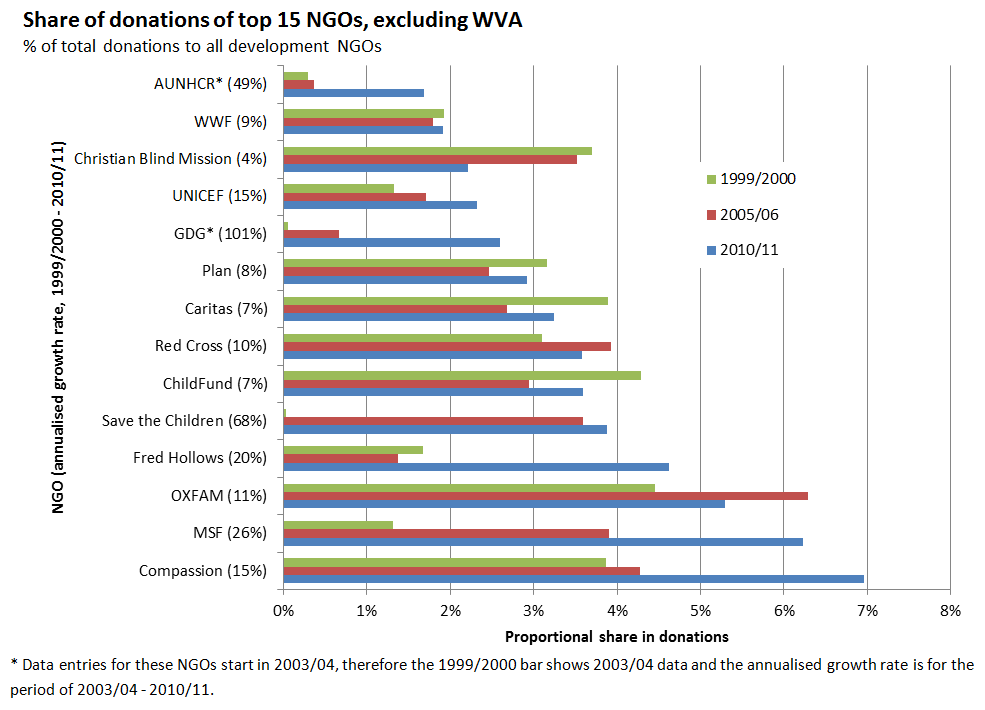 There has been considerable churn within the sector. Some of this is random. Red Cross funding goes up and down since it raises funds to respond to disasters and crises. But some structural trends can also be detected.

The low growth rate group received 25% of all donations in 1999/2000, falling to 23% 11 years later. However, the high growth rate group received only 8% of all donations in 1999/2000, but 28% 11 years later. That is, the high growth group started the decade much smaller than the low growth group, but ended it bigger. Of the five biggest NGOs at the turn of the century (World Vision, Oxfam, ChildFund, Caritas, Compassion), only Oxfam and Compassion have grown their share of donations.

Why have a group of “insurgent” NGOs done so much better than the established NGOs? Part of it must be that it is easier to show fast growth from a low base. But part of it might be that some of these fast-growing NGOs are ones with fairly simple “we save lives” messages: MSF and Fred Hollows Foundation, for example.

The sector is evenly split between child sponsorship agencies and others. ChildFund, Compassion, Plan and World Vision are the main agencies which practice child sponsorship. They make up 46% of the sector, but only Compassion is in the high growth group.

Finally, the sector is still dominated by agencies with a religious affiliation but is becoming increasingly secular. The share of donations received by religious NGOs, out of the top 15, has fallen from 71% in 1999/2000 to 57% in 2010/11. This reflects the fall in the share of World Vision Australia of top-15 donations from 53% to 39%.

The overall picture presented by this data is of a development NGO sector that has experienced strong growth in the last decade, but whose expansion has slowed in recent years. While overseas donations are still a tiny part of the ordinary Australian’s expenditure, Australians do on average give more than twice as much they did 11 years ago, even adjusting for inflation.

The internal structure of Australia’s development NGO sector is changing. World Vision Australia previously dominated the field with a share of donations of more than 40%, but its share of the market has declined in recent years to 33% in 2010/11. Some other established players are also losing ground to a number of earlier much smaller NGOs who have been growing quickly, and who are shaking up the structure of the NGO development sector.

[1] In recent years, ACFID has started publishing aggregate data on donations to non-member development NGOs. This data is not available for enough years to be used here. In 2010/11, the total of such donations was $125 million. $118 million of this was donations to MSF and Compassion. In other words, we are not missing much.
[2] Calculated using a population of 22.6 million for 30 June 2011, from this ABS site.
[3] According to this August 2010 article, spending on pet vet services in Australia is $2.22 billion.

Sophie Roden
Sophie Roden was an intern at the Development Policy Centre.