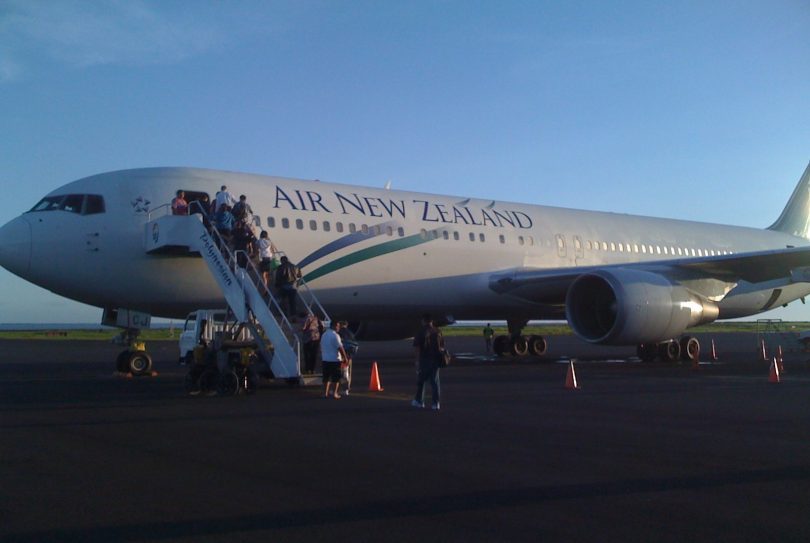 The new Australian government has announced it will introduce a new permanent visa for the Pacific, the Pacific Engagement Visa. The proposal has already been met with a very warm reception in the region. But just how popular is it going to be with the people of the Pacific? A good idea of this can be gleaned by looking at New Zealand’s Pacific permanent residence visas – since, after all, Australia has said it will be modelling its approach on New Zealand’s.

The Samoa Quota, which commenced in 1965, currently entitles 1,100 Samoans to migrate to New Zealand every year. The Pacific Access Category, established in 2002, entitles 75 Tuvaluans and i-Kiribati, and 250 Tongans and Fijians to do the same. (Samoa gets more slots, and has its own visa, because of the Treaty of Friendship signed in 1962 when the country gained independence from New Zealand.)

Both visas work in the same way. Principal applicants aged between 18 and 45 must register themselves, their partners, and all dependent children aged under 25 to enter an electronic lottery. If the principal registrant’s name is randomly selected, that person must pass an English and a health test. Their partners and dependent children must also meet health and character requirements. Principal applicants have eight months to find a full-time job that meets a specified income threshold. Immigration New Zealand selects 15-30% (depending on the country) more applicants than slots to allow for the fact that not everyone will meet the language, health and job requirements.

The figure below shows this ratio for all the years and countries for which we have data. For all the countries except Fiji (and perhaps for Fiji too) the ratio is on an upward trend. In other words, the visas are getting more, not less, popular. This trend is especially pronounced in Kiribati, where the ratio of applicants to slots has skyrocketed from 5 in 2002 to 58 in 2019. In Tonga the ratio has tripled, in Tuvalu it has gone up from 1 to 16, and in Samoa it has doubled. 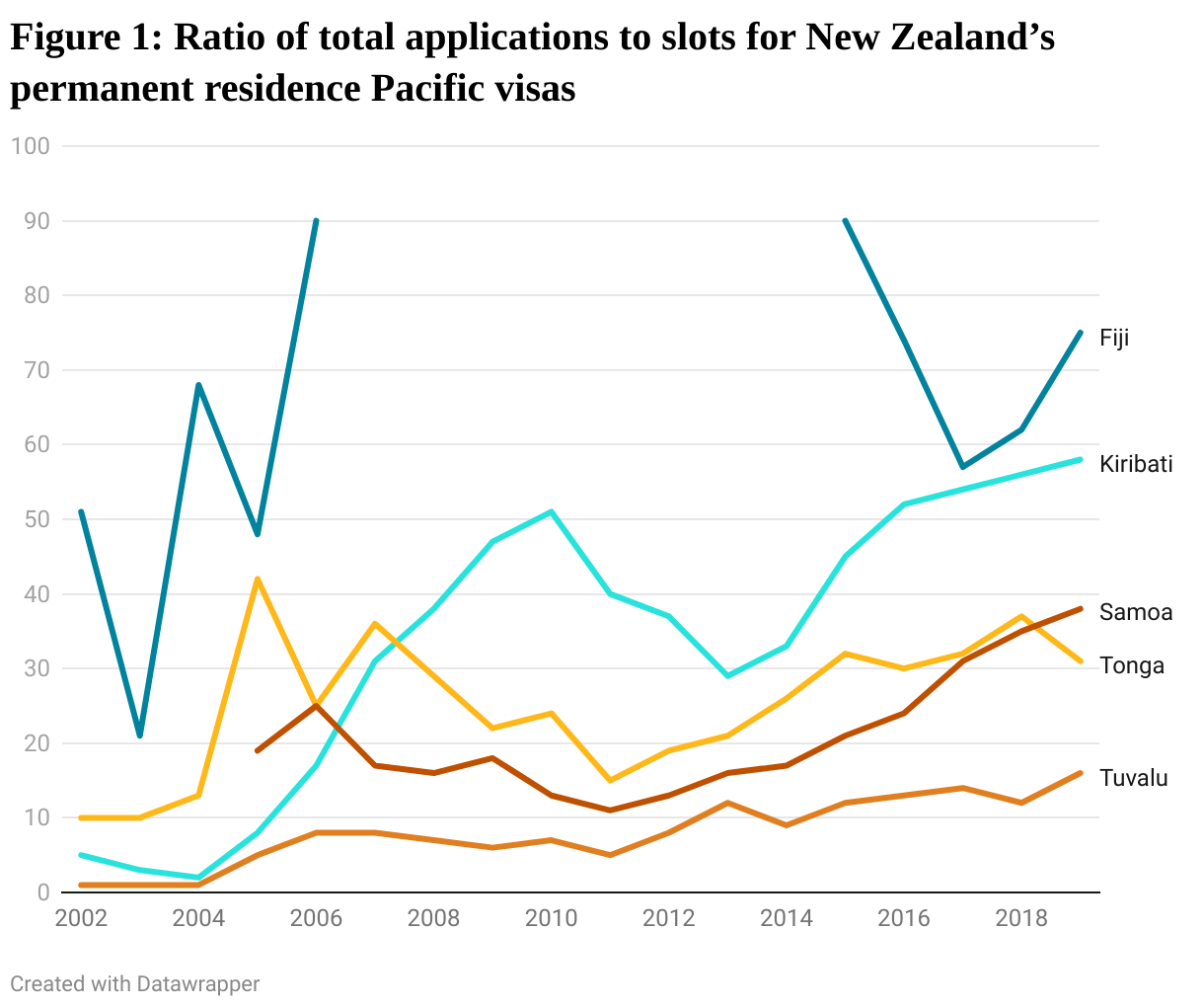 We can also compare the total number of applicants to the populations of the countries concerned, which is what the next graph does. Samoa is the stand out. In 2019, 21% of all Samoans applied to the lottery in the hope of migrating to New Zealand. So did 10% of all Tuvaluans, 7% of all Tongans, 4% of all i-Kiribati, and 2% of all Fijians. Again, note how the trends are largely upward, especially for Samoa, but for Tonga, Kiribati and Tuvalu as well. 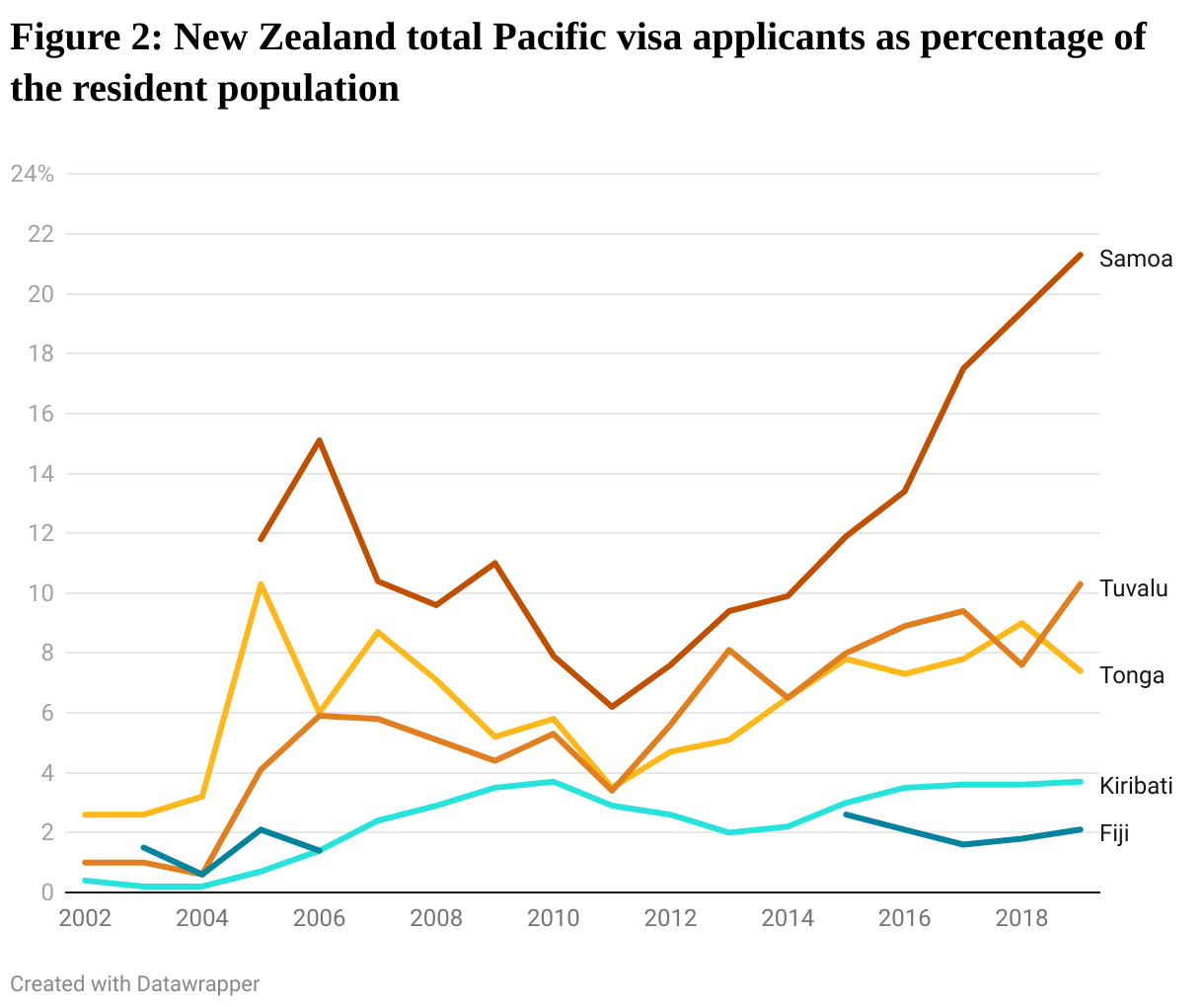 The upward trends for Tonga, Kiribati and Tuvalu are not hard to explain. Their Pacific Access Category began in 2002, and over time more people have heard about the visa, and more have had friends and relatives migrate successfully. New Zealand’s seasonal worker program (the Recognised Seasonal Employer scheme) has also played a role, as some employers have encouraged their workers to apply. The upward trend for Samoa, which is the sharpest of all, is harder to understand, given the longer history of the Samoa Quota. Samoa’s growing diaspora in both New Zealand and Australia (via New Zealand) may be part of the story.

In a recent survey, 54% of Samoans said they were willing to permanently move to another country. Outside of the Pacific, there are only 13 countries where half or more of the population would like to move to another country. So Samoans are clearly very pro-migration. The same survey notes that migration is more popular among young people, so perhaps attitudes are changing over time.

We can conclude on the basis of this analysis that the Pacific Engagement Visa will be very popular and massively oversubscribed. Since it will be directed mainly to the larger, Melanesian countries one wouldn’t expect the same proportion of population to apply. At the same time, the fact that these countries have fewer opportunities for migration will push up demand. Whatever the initial response, if the New Zealand experience is anything to go by, the popularity of the Pacific Engagement Visa will grow over time.

Get the New Zealand visa data. Population data from World Development Indicators. When it commenced, the Samoa Quota was 750. It was increased to 1,100 in 1970. Demand is measured by those who register (principal applicants and family members) or reregister if they were not successful the first time round. Supply is measured by the country visa quota. In practice, actual visas issued will vary from year to year as underruns in some years have sometimes been made up by overruns in others. On average, for the last few years (pre-COVID: from 2015/16 to 2108/19 for Fiji, and from 2012/13 to 2018/19 for the other countries), actual visas issued have been on average about 90% of the quota, so relative demand is even higher than shown here.