The rise of women CEOs in Australia’s aid NGOs

By Terence Wood and Sherman Surandiran

In 1995, when Suzette Mitchell studied the gender composition of senior staff in Australian aid NGOs, she found that 67 per cent of organisations had men as executive directors.* Nineteen years later, matters had improved – 60 per cent of CEOs were men. But nearly two decades had passed, and the improvement was only 7 percentage points. Progress was underwhelming.

The news is different now though. Thanks to the data gathering efforts of the Australian Council for International Development (ACFID), and the transparency of its member organisations, we have built a dataset of aid NGOs’ leaders’ gender spanning the last five years. The chart below shows the share of ACFID members with women at the helm. (We did our best to fill in missing data in the ACFID dataset, but the data still aren’t wholly comprehensive. In all the charts and numbers in this blog, we only draw on NGOs with five full years of data so as to avoid trends artificially emerging because different NGOs have been counted in different years. With one exception which we note below, expanding analysis to include all ACFID members does not change findings significantly.)

The share of NGOs led by a woman has risen by 12 percentage points in just five years. For the first time ever, there are now more women leading ACFID member organisations than men. This still isn’t representative of the gender composition of ACFID members’ staff more broadly – about 70 per cent of staff in these organisations are women – but it is considerably closer than it was just a few years ago. Although the data aren’t perfectly comparable, on the basis of the numbers presented in Kate Sutton and Pip Henty’s recent blog, it also appears that ACFID members are more likely to have female leaders than is the case for NGOs globally.

When we first wrote about the issue of women being under-represented as the leaders of Australian aid NGOs, we showed the problem was most acute in faith-based NGOs. This is still true, but as the chart below demonstrates, faith-based NGOs are closing the gap. They’re improving rapidly, while any upwards trend in secular NGOs is less clear. (When we repeated our analysis using all ACFID members, not just those we had five years’ data for, we did find an upward trend in secular organisations, albeit a more modest one than exists for religious NGOs.) 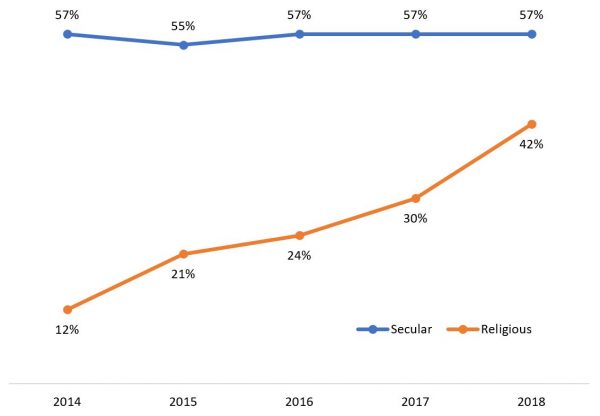 Changes at the top aren’t being driven by an increasingly female workforce more generally: throughout the years of our study the percentage of staff who were woman did not really increase. The gender composition of aid NGOs’ boards improved over the same period, but not by a lot – from 43 per cent to 46 per cent. On the other hand, as the chart below shows, the percentage of women at the head of boards has increased notably. (You can see all the charts and figures we refer to in our data file.)

Share of ACFID members with female heads of boards

As with when we first investigated the issue of gender imbalances in NGO leadership, we also looked at other NGO traits on an NGO by NGO basis to see if any were associated with having a woman leader. We did this by pooling all years’ data to provide a larger sample, which is technically desirable in the logistic regressions we used. (We also repeated the same tests using only the two most recent years’ data, in case relationships were changing over time – by and large they weren’t).

Interestingly, the traits that are correlated with differences in leader gender in any given year are not traits that are themselves changing rapidly. For example, NGOs with more female board members are more likely to have female CEOs, yet as we pointed out above, the gender composition of boards is only changing slowly. This means the recent increase in female NGO CEOs is being caused by something we don’t have data for. Although we can’t be certain, a likely candidate is a normative shift. We’ve been told that, starting with Dr Meredith Burgmann, and continuing under Sam Mostyn, ACFID presidents have actively used ACFID NGO gender data to press for change within the NGO community. We cannot test this explanation with our data, but it seems plausible, and if true it would be a great example of how community transparency, alongside leadership, can facilitate change.

Regardless of causes, the most important point is that change is afoot. There is a clear trend of improvement at the top, which is a marked break from previous decades, and something Australian aid NGOs deserve credit for.

* We cannot find this report online, but the reference is: ‘Mitchell, Suzette, 1995, Gender and Development: Policy and Practice of ACFOA member agencies, ACFOA Research and Information Series No 5, August 1995’. You can access a hardcopy of the report from the libraries listed here. We’re grateful to Aina Studer for help with the reference and Alice Ridge for bringing this report to our attention. More generally, we’re grateful to Aina and ACFID for ongoing partnership working with these data. While we’re grateful, views and calculations in this post are those of the blog’s authors alone.