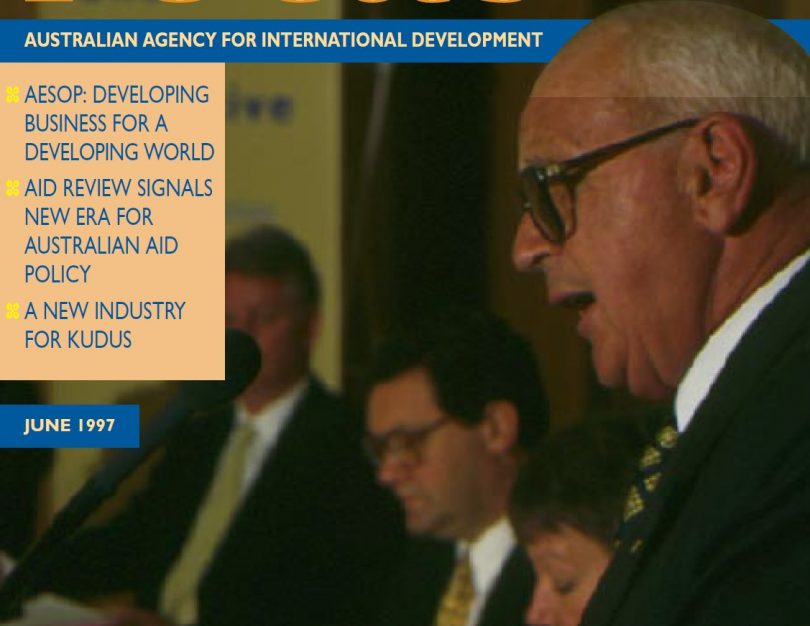 From the cover of AusAID magazine Focus, showing the Simons Report being presented to Foreign Minister Alexander Downer (DFAT)

That’s the problem with headlines. They can often be read more ways than one – and that’s my point. It’s not that the whole Simons Report was one big mistake, but rather that summing it all up in the phrase “one clear objective” was a communications clanger.

And a disclosure at the outset – I worked on the secretariat and drafted a fair swag of the report, so I’m not a neutral observer.

What seemed like a masterstroke then – putting a fundamental issue unambiguously up front – became an albatross when it was misread and misrepresented. Maybe that illuminates a second big lesson – don’t expect people to read a 350-page report. Almost no one did.

The Simons Report was commissioned by the incoming Coalition government in 1996, to reset policy after 11 years of the Hawke/Keating governments. Aid and development had become both visible and political by the mid-1990s, not least as a result of Labor using development cooperation deliberately as part of a strategy of Asian integration.

In practice, the Simons Report offered more continuity than change, but the review process allowed re-evaluation and a balance to be struck between the two. The new government was able to become familiar with development cooperation and to see how it could advance its priorities before making big decisions.

After a tussle between ministers, a three-person review team was selected, none of whom had direct and deep experience with official development cooperation programs, or diplomacy for that matter. That made the whole process much more fraught than it might have been.

So how was One clear objective misread? The subtitle was Poverty reduction through sustainable development. That got read as a single objective of altruistic poverty reduction, via NGO-style grassroots poverty alleviation projects.

In fact, the report was at pains to argue for economic growth and broad-based development as the best poverty reduction strategy, and also the best way in which the program could deliver broader diplomatic, commercial and security benefits.

It put foreign policy up front by recognising the enduring Australian national interest of regional peace and stability, reaffirming a focus on the Pacific and Southeast Asia. On the Pacific, it briefly raised labour mobility and new forms of political union as win-win solutions to problems of sustainability and security, showing just how long it takes for policy ideas to come into their own.

But much of that got lost in … one clear objective.

Without a doubt, the 1984 Jackson Review was the most erudite and influential look at Australia’s international development efforts ever conducted. It took disjointed programs and policies and pulled the whole into something coherent, particularly built around country programming.

The Jackson approach to Australia’s international development objectives was to recognise, up front, humanitarian, diplomatic and commercial motivations, and in doing so, to try to balance and manage them.

What Simons concluded was that the ‘three-legged stool’ formulation had broken down, and that secondary, spinoff commercial benefits had become a significant driving and distorting factor in the choice of activities. I hold to that analysis to this day.

Despite being an adviser to his Labor predecessor, Gordon Bilney, I credit Foreign Minister Alexander Downer – who ultimately agreed to untie Australian aid – with breaking this link, freeing programs to become more strategic and impactful.

Nowhere was the commercial driver clearer, or more controversial, than in the case of the Development Import Finance Facility (DIFF). Both its supporters and detractors were vociferous. There were arguments for and against, but these were turbo-charged by politics, as Downer had gone to the election promising to abolish the scheme, and subsequently made statements in parliament about the regional reaction that were shown to be incorrect.

In concluding that DIFF was too compromised to continue, the Simons Report recommended investigation of alternatives for Australian lending programs, but this was not taken up. Time to look again perhaps, but transparently and rigorously.

Debate is occurring anew about the merits and demerits of the Australian Infrastructure Financing Facility for the Pacific, and about Australia establishing a development finance institution. In this context, it would be useful to revisit the whole DIFF saga as dispassionately as possible.

Interestingly, some of the problems that bedevilled DIFF have also arisen in the UK’s more recent efforts to combine private and public finance for development purposes – the concentration of finance in a small number of well-off markets; doubts about whether development funds were ultimately additional, or merely substituting for private money; the distortionary effects of commercial subsidies; and the drawbacks of supplier-driven assistance.

The multilateral development banks have shown that these issues can be managed, but it’s hard work. Institutions need to be operating at large scale, draw on world-class public sector and private sector expertise, and have purpose-built policies, systems and skills. Right now, those preconditions are nowhere near being met in Australia, so if ever we want to go that route, some serious institution building will be needed.

The Simons Report came at a time, after the collapse of the Soviet Union, when Western triumphalism was building and the orthodoxy was for deregulation, privatisation and unfettered trade and investment. We bought into some of that, but with cautions.

We argued for capable states able to provide essential services and regulate business. We tempered the new government’s enthusiasm for private capital, showing how volatile it was and how concentrated by countries and sectors – judgements vindicated almost immediately by the Asian financial crisis. We argued, 20 years before Glennie, that foreign direct investment was important, but was no substitute for development cooperation.

There was an economics and governance emphasis in the Simons review that we might usefully return to today, albeit leavened with more humility around exactly what works, where, when and why. Post global financial crisis and COVID-19, it’s the right time for us to rethink the respective roles of the state, the private sector and civil society. This takes on extra urgency given the systems struggle we are in, and the need to reinvigorate and relegitimise democratic governance.

The Simons Report was released to ministerial praise, but some senior AusAID disdain. It turned out that some of those who had previously wanted coherence and rigour thought they already had enough of it.

This blunted implementation of some of the report’s major recommendations. Despite this, most of its themes and directions were eventually adopted – including an emphasis on more rigorous approaches to poverty reduction; stronger strategic planning; more use of cost-benefit analysis; deployment of greater specialist expertise; and improved evaluation. However, it was a long while indeed before its calls for an independent office of evaluation and an aid advisory board were introduced.

The Simons Report didn’t get everything right, far from it – for example it was weak on the environment, and I for one have changed my mind on graduation – but the report gave AusAID and the government a push along some pathways that delivered greater effectiveness.

The new Labor government taking office this week will need some sort of process to go from where we are now to where we need to be. There’s a Grand Canyon to be bridged, and that’s unlikely to happen just through a press release and a ministerial statement.

It is more than 10 years since the last independent review of Australian development cooperation (2011), with COVID-19 having put paid to a 2019 attempt at an expert-led policy reset.

DFAT did a good job at quickly preparing Partnerships for Recovery in 2020, but that COVID-19 policy is now expiring and there’s a need for a longer term strategic plan to guide the whole and articulate how it is related to Australia’s foreign policy priorities. This becomes all the more acute if the government is not going to embark on a UK-style integrated review.

Some sort of quick, transparent process involving both internal and external expertise to design a new strategic framework for Australian development cooperation could make one clear contribution.