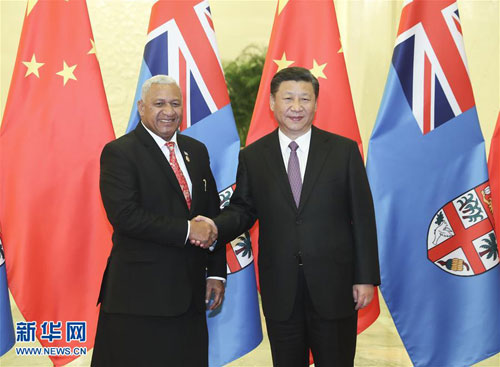 The upside of the China-Pacific-aid controversy

Minister for International Development and the Pacific Senator Concetta Fierravanti-Wells has won few friends for her criticisms of Chinese aid in the Pacific. Foreign Minister Julie Bishop has distanced herself from the remarks, and both Chinese and Pacific leaders have denounced them. Minister Fierravanti-Wells has also been criticised by a range of commentators, including me, for a range of reasons: Australian aid has its own problems; Chinese aid works much better in some countries than others; if you are having a go at China for giving then you are implicitly criticising the Pacific countries for taking.

But there is also an upside to her remarks, the controversy surrounding them, and the general perception that, with China’s growing influence, Australia needs to lift its game. In fact, there are three upsides.

The first, for those who support aid, is that at last we have a strong strategic argument not to cut it. Saving the aid program doesn’t seem like such a harmless budget-saving measure if it is actually ceding ground to China. Although the Coalition spared the Pacific of most of its swingeing aid cuts – focusing them on Asia and Africa – the reality that it had cut aid undermined the Minister’s position.

It does now seem that there is a floor under Australia’s aid, and perhaps even some upward pressure given the growth in China’s. While Pacific countries are seen as being aid recipients indefinitely, Asian countries have traditionally been seen as only temporary recipients. Thailand, Malaysia, China and India have all “graduated” from Australian aid. Absent China, the rest of Southeast Asia – Indonesia and the Philippines, and then Vietnam, and then finally Cambodia and Laos – could be expected to follow suit. But given China – on top of terrorism fears – graduation now seems like a highly unlikely outcome. After years of lacking an accepted strategic rationale for aid, perhaps now we have found one. And a bipartisan one at that.

The second upside of the China-Pacific-aid controversy is more for the aid sceptics. As Graeme Smith has recently commented, the controversy sparked by the Minister’s criticisms started with an article on Chinese aid to the Pacific by prominent business person and former Abbott adviser, Maurice Newman. This was also published by The Australian, just a week earlier. Newman’s article, while also trenchant, is, however, more critical of the Pacific than it is of China. It asks the perennial question: why is a region that gets so much foreign aid so poor? Smith points out some inaccuracies in the article, but Newman gets the answer to this question right: “lack of scale and remoteness” as well as poor governance (“corruption, political instability”). Newman’s critique is very much in the tradition of the ANU academic Helen Hughes, who famously argued in 2003 that “aid has failed the Pacific” (as she titled her monograph). From Newman’s perspective, neither Chinese nor Australian aid is the solution. A pox on both your houses.

Newman concludes by calling for a “fresh approach” based on integration rather than aid. He refers to a 2003 Senate Inquiry report titled “Pacific Engaged”, saying that it “argued for full political and economic integration, complete with a single currency.”

Newman is right that in the Pacific we need to look beyond aid and towards integration. But he gets the mechanisms wrong. The 2003 report only said that deep integration was an idea “worthy of further research, analysis and debate.” Even if Australia were to show more interest in deep integration, there is no evidence that the Pacific Islands will reciprocate.  The model should be our relationship with New Zealand, the country with which we are most integrated. We don’t have the same currency as New Zealand let alone any political integration, but we do have unrestricted two-way labour mobility.

Newman doesn’t mention it, but the 2003 report also advocated for a scheme whereby labour would be “sourced from the [Pacific] region for seasonal work in Australia.” It took a while, but the Seasonal Worker Programme (SWP) was introduced by Labor in 2007, and it has been growing strongly under the Coalition.

Labour mobility is the single most important integration-promoter between the Pacific Islands and Australia. It is also something China cannot offer: Pacific workers can’t go to work in China, and wouldn’t want to even if they could. Traditionally, we have made it very hard for Pacific Islanders to come to Australia. We have started to make amends for that in recent years – with the SWP and now the Pacific Labour Scheme – but both of these only allow temporary entry. What we really need if we want to build our influence in the Pacific is to grow the Pacific diaspora in Australia, which will require a “Pacific window” in our permanent migration program.

That’s a radical idea, but perhaps the new perception that there is an external threat to our place in the region will allow more radical ideas to flourish. More broadly, and this is the third benefit of the current controversy, the competition provided by China offers the possibility that the casual way in which Pacific policy has been implemented in Australia might be replaced by a more thoroughgoing approach. Australian policy to the Pacific has been criticised, most notably by Jonathan Schultz in 2013, for the low priority it has been given. Australia, Schultz argued in 2013, lacks “a strong, long-term policy orientation in the Pacific, and … our level of engagement therefore fluctuates wildly.”

Competition is often beneficial. Competition with China in relation to aid and influence, whether perceived or real, might stop us cutting aid further, make us look more generously at Pacific labour mobility, and take the Pacific more seriously. Perhaps Maurice Newman and Senator Fierrevanti-Wells have, in their own way, pointed the way forward.