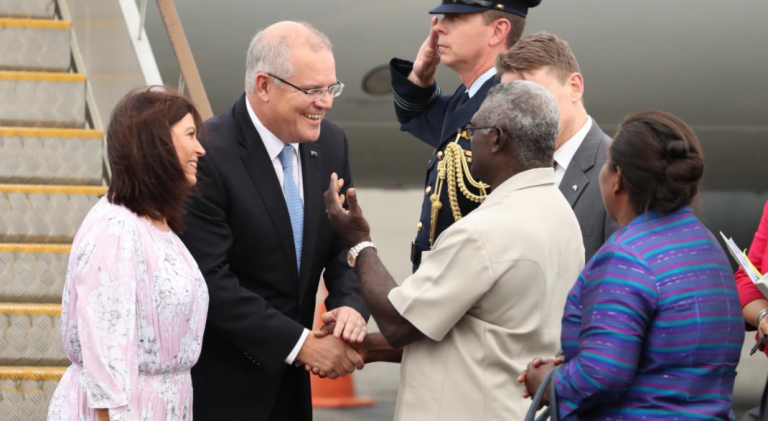 If you’ve ever driven from Honiara out to the places where the roads are finally, fatally wounded by potholes, if you’ve ever pulled up to a dilapidated wharf, or if you’ve ever landed on a grass runway, you’ll appreciate Solomon Islands’ need for better infrastructure. You may have also been tempted to applaud Scott Morrison’s pledge to spend AU $250 million of aid on infrastructure in the country over the next ten years.

Don’t applaud too quickly though, three questions need to be asked.

First, how much of the spending is actually new?

My calculations based on Australian reporting to the OECD show that from 2012 to 2017 Australia spent about AU $11 million a year on average on infrastructure of the sort promised during Morrison’s visit. A spend of $25 million a year will clearly be a break from past spending. However, if you look at the most recent DFAT Orange Book, you’ll see on page 16 that $69.2 million is allocated for “Infrastructure and trade” in Solomon Islands in 2019/20. Nearly $30 million of this will be spent on the Coral Sea Cable — a (hopefully) one off event — but that still leaves about $40 million.

“Infrastructure and trade” is broad, including spending other than the sort Morrison pledged. But even accounting for this, it seems, on the basis of comments on page 17 in the Orange Book, that Australia may have already decided to commit itself to more aid for infrastructure in Solomon Islands well before this visit.

Still, timing aside, Australia is upping its focus on infrastructure, and this is clearly something Morrison, reasonably enough, wanted to highlight. Which brings me to my next question.

What is motivating the increased infrastructure spend?

In the media, everyone’s answer to this question is simple: China. Solomon Islands currently has diplomatic relations with Taiwan. Talk has it that China is trying to woo Solomons into abandoning Taiwan and establishing diplomatic relations with China instead. Taiwanese aid to Solomons takes the form of politically useful money for MP’s constituency funds. China specialises in aid for infrastructure. Australia doesn’t want China’s influence to rise in the Pacific. Ergo, Australia provides Solomons with bundles of money for infrastructure, meeting its needs, and reducing China’s allure.

There is another possible explanation though, along the lines of, ‘Australian aid has focused on governance for years, but Solomon Islands is more stable now, so it’s time to focus on economic growth’. This is plausible and would fit with a Coalition emphasis on aiding economic growth that has existed since 2014.

It’s plausible but not wholly convincing. There were riots in Honiara after the April elections; is the country really that stable? And is infrastructure actually more likely to promote growth than better governance? There’s a large literature in development economics contending that poor institutions are the key long-run impediment to growth. Also, there are other donors — like the ADB — that specialise in infrastructure, and which have their own plans for Solomon Islands. Is Australia really funding an unmet need?

It’s unlikely development considerations are the only ones shaping Australia’s decisions.

Of course, one might be willing to forgive mixed motives if the aid actually delivered, but that leads to my final question.

Will this infrastructure spending actually work?

The government only keeps Henderson International Airport running thanks to ongoing international involvement. Its failure to meet its commitments is one of the reasons why New Zealand’s work on Munda Airport, which started in 2012, had still failed (last time I asked, earlier this year) to see the runway classified as an emergency backup for Henderson.* The Solomon Islands government has failed to maintain roads, bridges and wharves for years — if it hadn’t, the current need for infrastructure wouldn’t be nearly as great.

Poor governance in Solomon Islands isn’t the fault of the country’s people, its civil servants, or even — in many instances — its politicians. As I’ve explained before, the country’s clientelist political economy pulls against good governance, and against managing and maintaining infrastructure. It’s a structural issue, not a moral one, but that’s also what makes it so stubbornly persistent, and something that needs to be factored into donors’ decisions.

Governance woes don’t mean that donors should never invest in infrastructure in Solomon Islands. They should. But if Australia really wants to assist in a tricky context, its decisions need to driven by need, and by the likelihood of success, not geopolitics.

* To be fair, as I’ve raised the issue of Munda in the past, the airport is currently receiving international flights from Brisbane flown by Solomon Airlines. My understanding is that this idea came from the Solomons government (New Zealand’s engagement was initially to get the runway to emergency alternative international status), and an international runway at Munda may serve as a useful boost to tourism if sustained. Even so, infrastructure for these international flights has required ongoing donor assistance.

As for how international flights can fly to Munda and the airport still not serve as an emergency alternative to Henderson, this is a question I don’t have an answer for. Possibly, Munda’s status has very recently changed. If anyone would like to set me straight on these matters, please email.