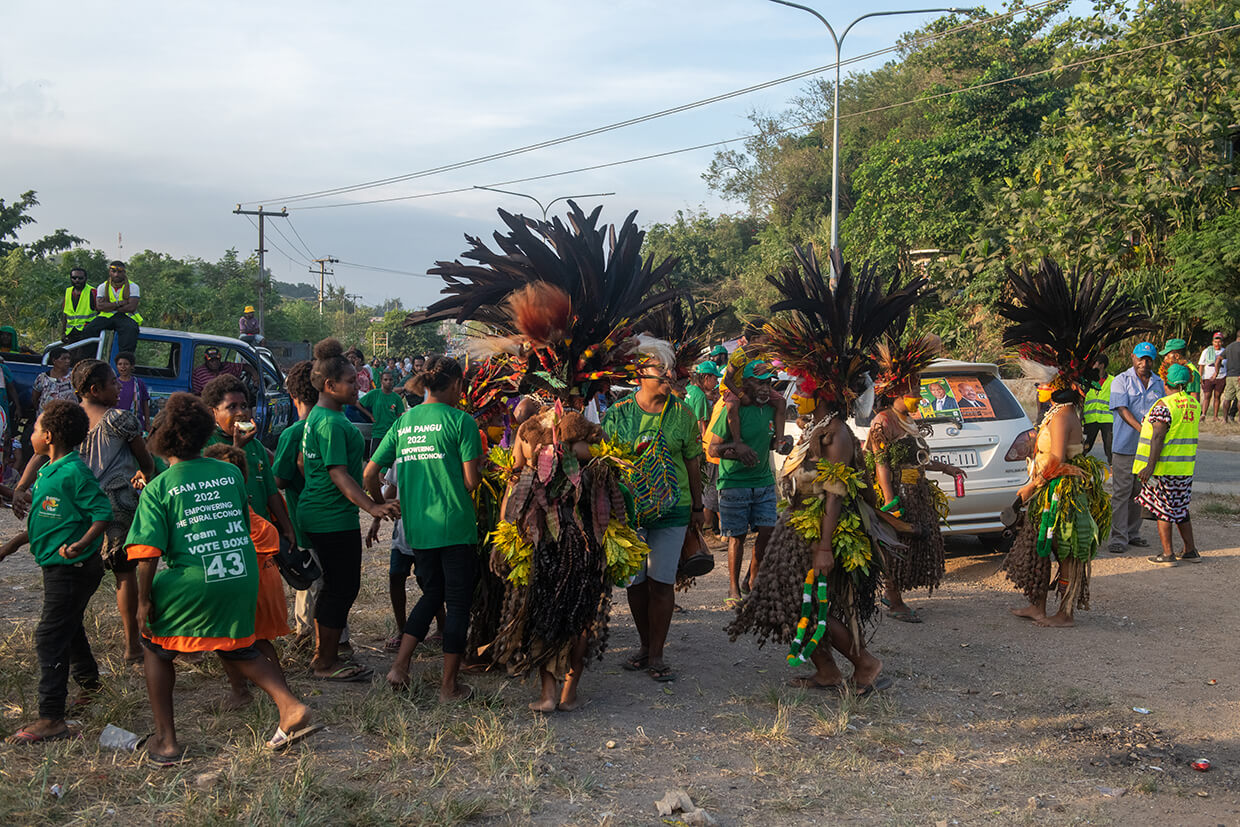 Supporters at a campaign rally in Papua New Guinea, June 2022 – PNG currently has no female members of parliament

A decade ago the Pacific Leaders Gender Equality Declaration (PLGED) was signed in Rarotonga, Cook Islands, in August 2012. Leaders reiterated their commitment (which they actually first made the year before) “to increase the representation of women in legislatures”.

Since then, there has been some progress. For the 13 Pacific Islands Forum countries which the Interparliamentary Union includes in its monthly rankings, the average percentage of women in parliament (in the lower house, where there is a bicameral system) increased from 7.4 per cent in 2012 to 12.9 per cent in 2022. 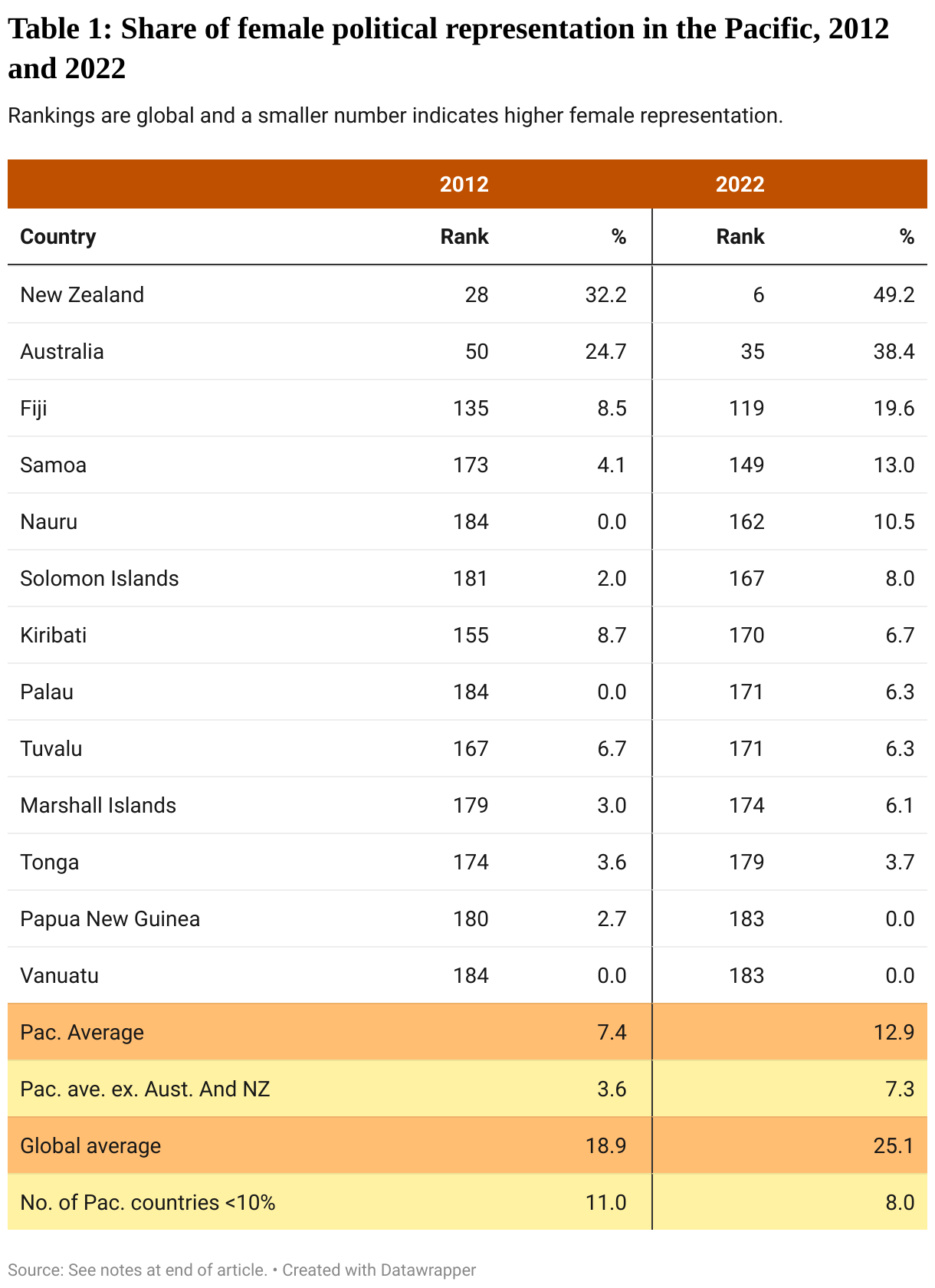 Moreover, whatever progress has been made is much too slow. The increases in Palau and Marshall Islands are of just one female MP. In Nauru it is two. In Solomon Islands, it is four, but three of these were elected when their husbands were removed from office.

In 2012, of the 13 countries, 11 had less than 10 per cent female representation in their lower house. Ten years later, only three of those 11 have managed to cross that 10 per cent threshold: Fiji, Samoa and Nauru.

According to the latest data, two Pacific countries are still at zero female representation (Papua New Guinea and Vanuatu), and five – all below that 10 per cent threshold – have gone backwards or stood still over the last decade (PNG, Vanuatu, Tonga, Tuvalu, and Kiribati).

Back in 2012, Pacific leaders – including Julia Gillard as Australian Prime Minister – expressed their concern that “women’s representation in Pacific legislature remains the lowest in the world”. The very same is true today. Of all the regions and categories in which the World Bank groups the countries of the world, the ‘Pacific island small states’ category has not only the lowest level of female political representation but a level that is less than half of the next lowest region, which is Western and Central Africa. 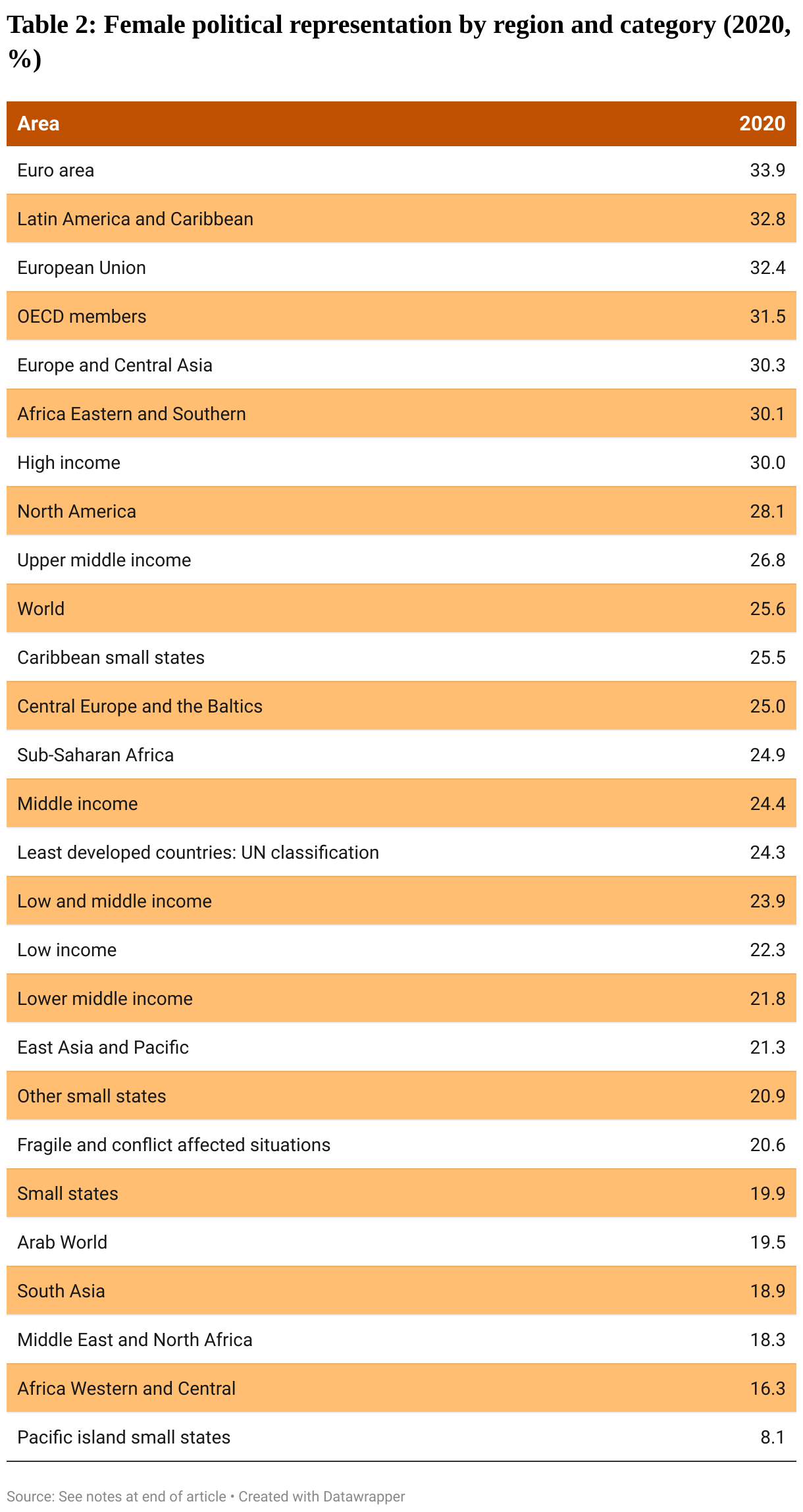 What to do? The Pacific is awash in regional meetings, acronyms and declarations dealing with gender equity. The most recent, the Pacific Islands Forum Women Leaders Meeting, had its first gathering in June in Fiji. The experience of the last ten years is that they are not enough to bring about change on the ground.

Clearly, affirmative action measures or quotas are needed in the lagging countries. Samoa provides a benchmark: it modified its constitution in 2013 to ensure at least 10 per cent of MPs were women. Its level of female political participation has increased over the last decade from 4 to 13 per cent.

Pacific leaders would not commit to implementing quotas at next week’s Forum leaders meeting but they could commend Samoa on its reform. All countries could agree to a target of at least 10 per cent female political representation, and commit to introduce quotas (‘Temporary and Special Measures’ in the jargon) if their ratio is currently less than 10 per cent. The Secretariat could be tasked with reporting on outcomes against this target at every meeting, and countries which failed to achieve the 10 per cent threshold and didn’t introduce affirmative action would have to explain why.

This is neither an ambitious nor an original proposal. In 2018, the Vanuatu National Council of Women proposed to the Forum that Pacific countries should agree to a 30 per cent quota. But even a 10 per cent quota would make a difference in most Pacific countries, and would be a practical way to actually bring about progress rather than just talking about it. Once introduced, the quota could be increased over time.

Despite it being a modest proposal, securing agreement on such an approach would be a Herculean test for Pacific leaders. Especially given the Pacific preference for consensus, any one laggard country could kill it.

Australia, New Zealand and Samoa could champion this proposal, but the temptation for the leaders of the former two is to treat Pacific relations as a popularity contest. They primarily want to be liked and, in particular, liked more than China. Will Anthony Albanese and Jacinda Ardern stand up for their countries’ values? It can’t be enough just to give aid for gender equity. Who wants to be part of a Pacific family that is so patriarchal?

The sad reality is that the Pacific is being left behind when it comes to female representation in politics. The time has come to move beyond the general declarations, statements of intent and talkfests which have proliferated in the Pacific and start committing to mechanisms that will actually drive political change towards gender equity.

Data notes: 2012 data from October; 2022 data from June. Fiji “2012” data are in fact from 2006 (i.e. pre-coup, when there was a parliament). Rankings are from the top. Data from the Interparliamentary Union, with country categories in the second table from the World Bank.