The surprise finding that remittances were Timor-Leste’s largest source of foreign revenue after oil and aid in 2017 is further confirmed by new data to hand, provided by the Labour Market Information Directorate, Secretary of State for Youth and Labour, Timor-Leste. Information from the ANZ Bank shows an additional USD$3.1 million was remitted from Australia in 2017. The estimated total amount remitted to Timor-Leste in 2017 through three conduits: Western Union, BNU (Banco Nacional Ultramarino) and ANZ Bank, now stands at USD$43.78 million.

The graph below (an updated version of the graph in the original blog post) shows the estimated value and share of the remittances for 14 source countries. The share of remittances in 2017 from the UK is 62.6 per cent, from Korea 22.3 per cent and from Australia 11.6 per cent. Remittances from the UK injected USD$27.1 million into the Timor-Leste economy in 2017, followed by USD$9.6 million from Korea. The remittances from Australia are an estimated USD$5 million, up significantly from the earlier estimate. Moreover, as noted previously, these data do not include the savings brought home in-hand by seasonal workers. 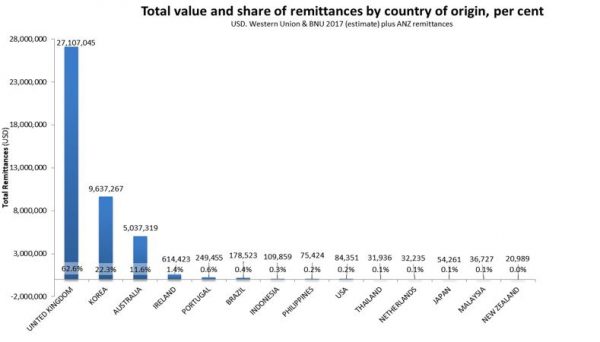 This is an update to a previous blog on remittances to Timor-Leste.

Richard Curtain
Richard Curtain is a Research Associate, and recent former Research Fellow, with the Development Policy Centre. He is an expert on Pacific labour markets and migration.