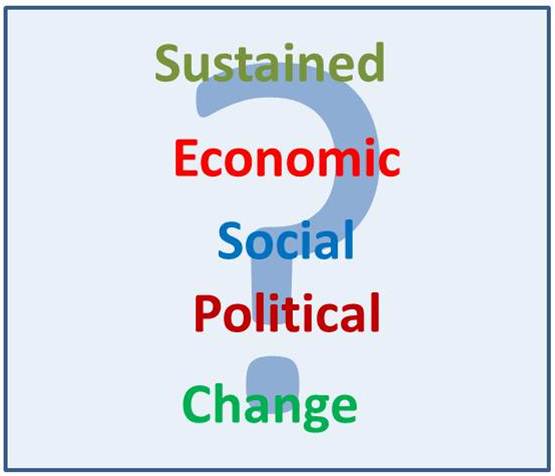 To strive or to serve: how should NGOs promote sustainable development?

Self sustaining positive change. If aid work has a holy grail this is it: improvements in people’s quality of life that continue long after the development workers have left. It’s not the only way aid can help: even aid work that involves perpetual assistance can do good. But change that leaves countries and communities better off in a way that won’t be undone when the aid money stops is the ideal.

The trouble with sustainable development of this sort is that, although it’s easy to picture, it is hard to bring about. We may have a good idea of what won’t work, but we’re less certain of what will.

This uncertainty rarely stems from having absolutely no idea about what to do. Rather, it comes from there being many potential paths to improvement, and limited evidence about which path works best in any given context. In these circumstances aid work involves difficult choices.

Sustainability is the theme of the annual get-together of Australia’s international NGOs, the 2012 ACFID Council, which is being held this week in Canberra. A good example of a difficult, high-level choice confronting NGOs when it comes to sustainability is whether to address poverty as an economic phenomenon, with economic solutions, or to address it as something that ultimately has its roots and solutions in the realm of politics.

Addressing poverty as an economic problem involves work such as loaning money to people to start small businesses, or seeking to improve human capital through helping children attend school. The rationale is that small improvements can be compounding and ultimately self-sustaining: businesses expand; profits are reinvested; educated children get better jobs. It is the sort of reasoning that underpins micro-credit and micro-savings work, and child sponsorship.

Addressing poverty as a political problem involves work such as helping to empower people to demand legal rights to their land, or to tackle corruption in their government. The rationale here is that people will never escape from poverty until they have rights, fair rules, and a say over how they are governed.

Both approaches to addressing poverty sound reasonable and, if assessed solely on the logical coherence of their causal arguments, neither is obviously better than the other when it comes to development that is ultimately sustainable.

The situation is also complicated by the fact that usually NGOs are working as external agents of change (which is true even for NGOs working in their home country, who are still often outsiders in the poor communities where they are active). As external agents trying to foster change, NGOs are inevitably going to be imperfectly informed about context. There are limits to what they can do and they are often hampered by powerful local actors. Under these circumstances, it is possible that the optimal approach in a hypothetical world of omnipotent NGOs won’t be the best approach in the real world where NGOs are constrained actors.

What approach should NGOs choose? Obviously they can do a mixture of both types of work, but in a world of finite resources, more of one means less of another. Trade-offs can’t be avoided. Choices have to be made.

NGOs confronted by these choices may well be interested in Naila Kabeer, Simeen Mahmud and Jairo Castro’s recent paper ‘NGOs and the Political Empowerment of Poor People in Rural Bangladesh: Cultivating the Habits of Democracy?’ in World Development. Unfortunately the paper is behind a paywall but I’ll try and provide a brief summary here.

The paper draws on survey data from Bangladesh and looks at the impact of membership in six Bangladeshi NGOs on the political activities and economic welfare of their members. Three of the NGOs focus on providing economic services. Two of the NGOs focus on empowering their members politically and one was political but is now essentially service oriented. It’s an interesting paper, which does a good — albeit imperfect — job of isolating the impacts of NGO membership from other factors influencing people’s political and economic lives. And generally the political NGOs come out looking good, appearing to do at least as well in improving economic outcomes as the ‘economic’ NGOs (although neither group is associated with unambiguously positive outcomes). And membership of political NGOs appears to lead members to more collective action and is associated (although possibly not causally) with increased involvement in political campaigns. The results aren’t overwhelming and are puzzling in their own way (while membership of political NGOs seems to be associated with more political campaigning it is at best only very weakly associated with an increased propensity to vote).

One study from one country, with suggestive but somewhat ambiguous results. Clearly it isn’t the final word but it is an interesting piece of evidence that NGOs might bear in mind when deciding how to work.

More than this though, the study suggests a means through which NGOs could make some of their most difficult choices easier in the long run: coupling their current work with research and rigorous impact evaluations.

The tool kit of methods that researchers have to answer development questions has expanded significantly in the last two decades, and many of the new tools, such as Randomised Controlled Trials (RCTs) work well on the scale that much NGO work is conducted. And yet, at least in the Pacific (the part of the aid world that I am most familiar with) the opportunity to combine NGO work with ongoing learning through research doesn’t seem to be being taken.

Why this is the case I’m not sure. Perhaps the problem lies on the supply side, with researchers in the region? Or maybe there simply isn’t the money, either from private or public donors, for funding research? Or perhaps practitioners are simply much more confident than I am that they have the answers to the difficult questions of development? Whatever the cause it strikes me as a missed opportunity. Surely the first step to answering difficult questions, like how NGOs can best promote sustainable development, is to ask them and then systematically gather evidence.

[Update: See this post — Oxfam Great Britain doing excellent work on learning what works and why.]