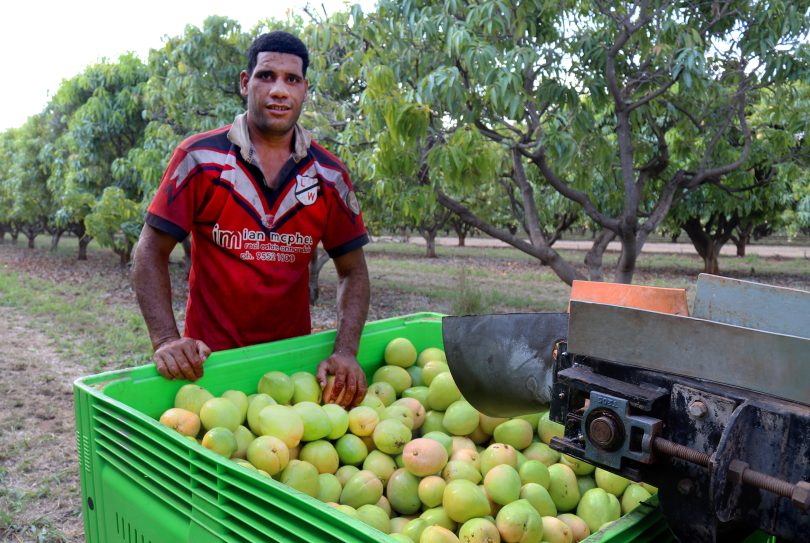 This blog answers two simple questions: how do migrant sending communities feel about temporary migration schemes, and does scheme participation affect these views? I use the Tongan household component of the Pacific Labour Mobility Survey to share some descriptive data on perceptions of the schemes and their impacts, and then more suggestive evidence on how participation affects these views.

The first question is “Would you like for yourself or someone from your household to participate in the SWP [Seasonal Worker Programme] or the PLS [Pacific Labour Scheme] programs in Australia or in the RSE [Recognised Seasonal Employer] program in New Zealand?”. 41% of non-sending households responded with “Yes”, suggesting unmet demand in Tonga for overseas work opportunities. That a non-trivial share of the non-participant households still wish to participate reflects quite positively on the schemes.

When asked “Which of these three programs would you prefer someone from your household to participate in?”, the most common response was “Indifferent”. Almost half of the households interested in participating don’t care which program. Among the others, the SWP was the most popular, then the PLS, then the RSE.

We also looked at perceptions of scheme impacts in sending communities, asking “What, if any, have been the economic benefits you have seen in your community from other households participating in SWP, PLS, or RSE?”. Response options were “Yes”, “No”, or “Don’t know” against different categories of potential impacts, listed in the figure below.

Figure 1 presents the proportion of respondents who reported “Yes” to each of the different categories of potential economic benefits (top five) and problems (bottom three). The proportion of positive responses is about 20 percentage points higher for perceived benefits than problems. But there is clearly a diversity of views. Almost all respondents acknowledge higher household incomes, a fact well documented elsewhere (see, for example, our presentation at the 2022 Pacific Update). 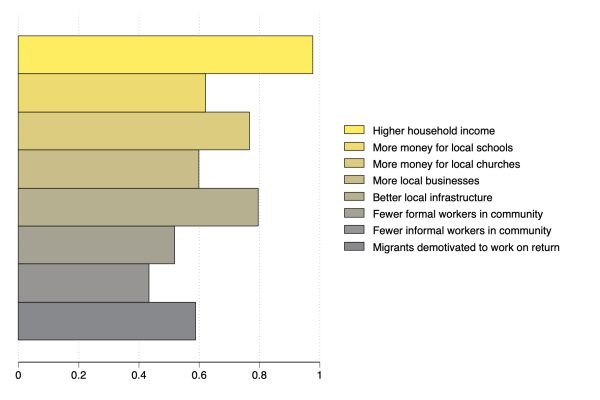 Note: this figure reports the proportion of “Yes” responses among non-migrant households when asked if they have seen any of these potential economic benefits (top five) or costs (bottom three) in their community from other households participating in the SWP, PLS, or RSE.

Figure 2 presents the same for perceived social impacts. Again, the six costs at the bottom are centred to the left of the eight social benefits. Two potential negatives that stand out are more use of alcohol and kava. 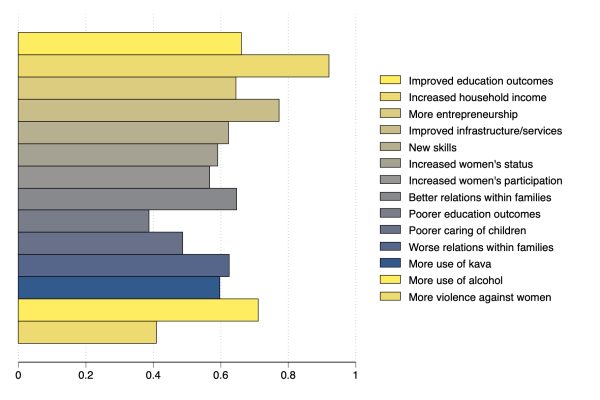 Note: this figure reports the proportion of “Yes” responses among non-migrant households when asked if they have seen any of these potential social benefits (top eight) or costs (bottom six) in their community from other households participating in the SWP, PLS, or RSE.

Although half of non-migrant households think that labour mobility is leading to worse relations within families, asking participants gives a different picture, at least with respect to marital relationships. We asked migrant households (specifically, the household head not working abroad) whether the impact of male or female (depending on the gender of the migrant) participation in temporary migration programs on the marital relationship in the household was positive, negative, or unchanged. Figure 3 shows that the overwhelming response was that labour mobility was positively affecting their marital relationship, with just 1 in 10 reporting negative impacts.

Note: this figure reports the responses of participant households when asked what the impact of participation in temporary migration programs has been on marital relationships in the household, by gender.

I’ll now share some simple impact estimates of whether household participation shifts these views. I compare migrant households to similar households which do not have a family member working in a scheme. Here, I’m accounting for household size and structure, wealth, location, education, English literacy, work histories, and migration history and networks, which captures a lot of the factors associated with scheme eligibility and propensity to participate, but as with any non-randomised comparisons, cannot rule out some unobservable drivers of these differences.

Figure 4: Effects of scheme participation on desire to participate further 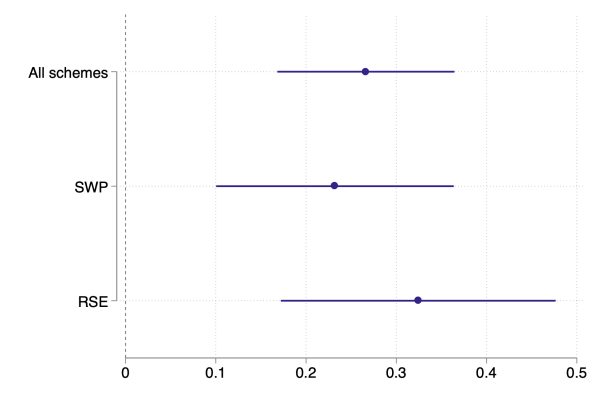 Note: this figure reports estimated effects (dots are point estimates, and blue lines 95% confidence intervals) of scheme participation on households’ expressed interest to participate further (that is, the outcome is a binary indicator of wanting to participate further, and the treatment whether someone from that household has in fact participated) in the schemes, comparing migrant households to non-migrant households after adjusting (specifically, matching based on propensity scores) for various household and individual characteristics summarised in the blog text.

In contrast, there are not many statistically significant differences estimated for the many different categories of household perceptions of economic and social impacts in sending communities. If anything, participation makes people less optimistic about funding for local schools, new skills from returned migrants, women’s status and participation, and family relations (you can see the plots of these estimates in my recent Australasian AID Conference presentation).

To summarise, new data suggests generally positive views of temporary migration schemes among non-migrant households in Tonga, and association with the schemes appears to increase interest in participating. There are concerns, and a significant number of people think there are some economic and social problems associated with the schemes, but on balance the perceptions are more positive than negative, and peoples’ revealed preferences indicate a continued and growing interest in the schemes.