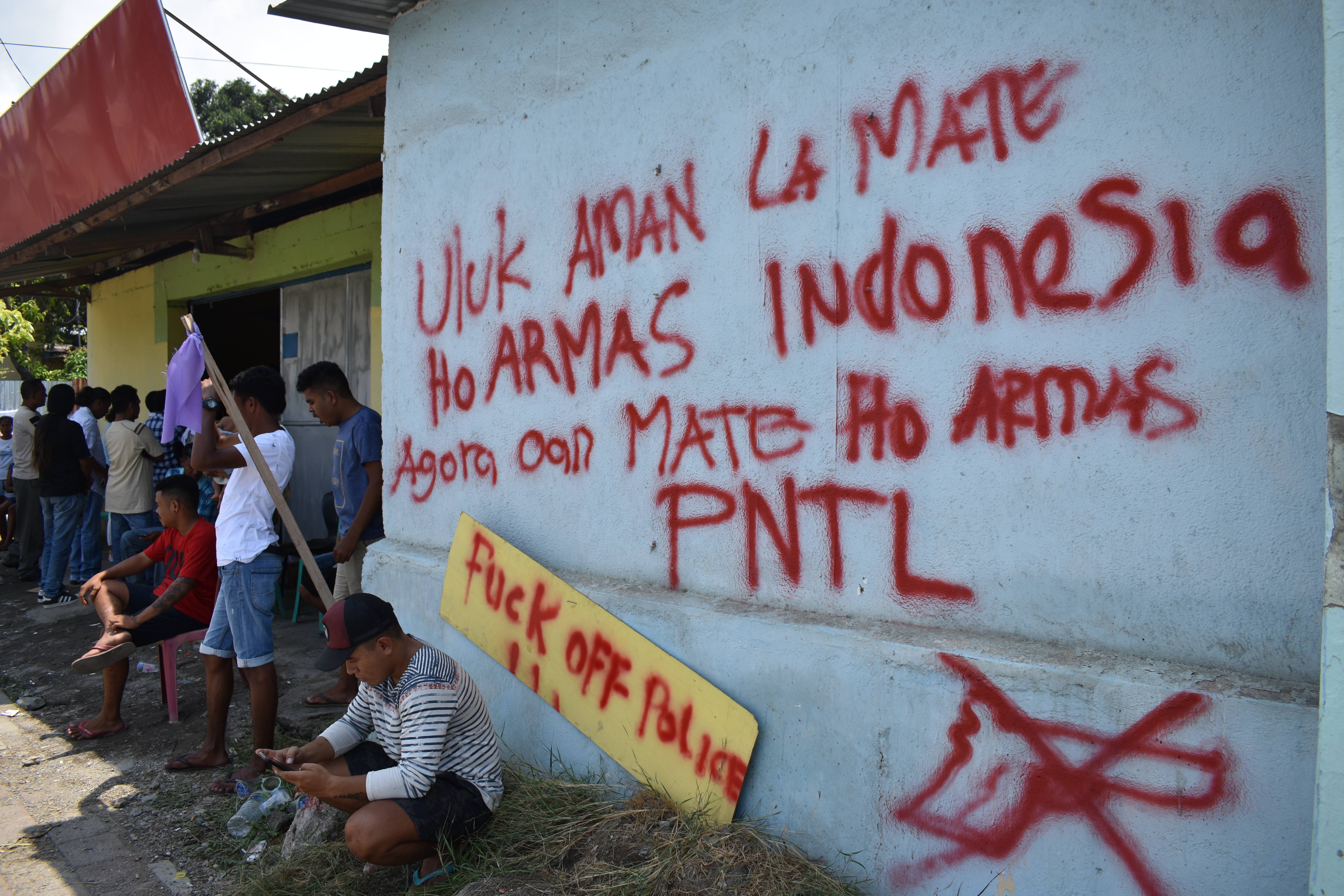 Young men hold vigil outside the homes of the victims’ families, in front of anti-police graffiti that now covers the neighbourhood (Photo: Bardia Rahmani)

In the early hours of Sunday morning in Dili, off-duty East Timorese police shot dead three young people and injured five. With tragic irony, the incident happened at a ‘kore metan’ party, a festive occasion intended to mark the passing of a year since a friend or family member’s death.

Anger at the police is palpable. On Timor-Leste’s lively social media scene, many Timorese have changed their profile picture to read #hanoin_kuluhun (‘Remember Kuluhun’, referencing the neighbourhood where the shooting took place), with the additional message that PNTL (Polícia Nacional de Timor-Leste, the East Timorese police) don’t need to carry guns.

The shooting occurred following days of protests in Dili against a decision of the Timorese Parliament to sell former parliamentarians Toyota Prado 4WDs at knock-down rates. While some of the protestors’ ire was directed against the East Timorese police for their over-zealous use of tear gas, indiscriminate and severe beatings, and arrests, there is no obvious linkage between the protests and the shooting incident.

Collectively, and separately, we have been working on issues related to the East Timorese police for many years. We watched and read the news over the weekend with sadness and dismay, but little surprise.

In 2014, we conducted a review of community policing programs in Timor-Leste supported by the New Zealand Government. We found a high degree of public support for policing, and grassroots demand for it to be more accessible at the village level. At the same time, it became apparent that although there was an explicit commitment to community policing in law and policy, this existed in tension with other militarising tendencies within the organisation. This starts right from the get-go. For example, recruit training – led by an arm of the Portuguese police, whom the Timorese government pay for – is explicitly paramilitary in orientation, with its focus on physicality and authoritarian rather than community-based approaches. More than half of the police then were members of ‘special units’, parts of the organisation with ill-defined mandates and an arsenal of high-powered rifles.

In the years since our evaluation, community policing has become more manifest in the PNTL, with the roll out of 452 village-level police officers through the country. These village level police are under-resourced but widely appreciated. What has not changed enough is a toxic masculinity that informs not only PNTL’s “could do much better” performance on responding to gender-based violence, but which allows off-duty police officers to run around with loaded weapons, in contravention of the rules. There is a tragic history of PNTL officers using weapons to “sort out” personal disputes, and of the small children of the police accidentally discharging firearms in the family home, sometimes with fatal consequences. There remains of large number of officers in the ‘special units’.

The Timorese police must be among the most extensively and expensively supported police organisations in the world. The United Nations set them up, and by our reckoning more than 10,000 UN police would have passed through the country over the years, many in a training and mentoring capacity. Australia has been among the biggest supporters of the PNTL since its establishment in 2002. The most recent aid performance reports suggest the focus is on training initiatives, the theory of change being that by providing knowledge, attitudes and practices will duly change. The Foreign Policy White Paper commits to Australian support continuing. New Zealand has been providing support focused on community policing.

We welcome the continued external focus. We believe it should continue. We humbly suggest three new areas of attention.

The first is a full and frank assessment of the PNTL’s own plans for itself. The 2014-2018 Strategic Plan was launched amidst much donor acclaim. As it nears its close, it would be timely to assess what has been achieved and what areas still need attention. We note Strategic Objective 4 of the plan is to “Develop PNTL’s capacity to act in a disciplined and accountable manner” which it is hoped will provide “increased confidence of the community in the PNTL service”. Let’s use such a review as the catalyst for open discussions with the Timorese police and government about the direction in which the police are going.

The second is for donors to have a much franker conversation with the Timorese government about the current police training regime, with view to a more suitable, and institution-wide emphasis on community policing.

The third is to support advocacy calling for the Timorese police to put away their guns for good. Rampant gun culture can only have tragic consequences. Dili is a safe city – far safer than most in Australia. The towns and villages elsewhere in the country are even calmer. (The major crime is domestic violence.) There is no obvious reason why so many of the Timorese police are swaggering around with weapons to begin with. An audit of how many weapons are in the hands of the police and where they are being kept are important first steps. In the wake of this weekend’s tragedy, many Timorese called clearly for better gun policy. Let’s support that.

Bu Wilson
Bu Wilson specialises in the areas of law and justice, governance, and ending violence against women, and supports a range of organisations with monitoring and evaluation, research and analysis, capacity and institutional development, stakeholder liaison and management, and partnership brokering.