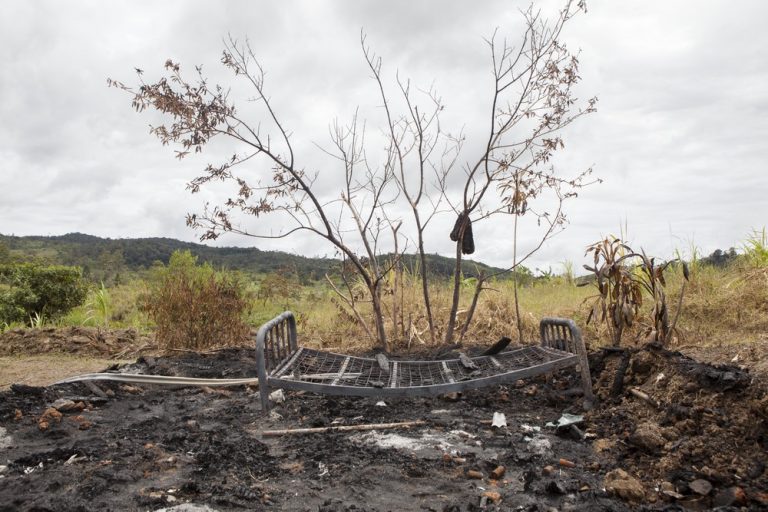 Tribal warfare in PNG: ICRC’s response to a changing landscape

Mark Kessler, head of ICRC Papua New Guinea, knows war. He has been posted to conflict hotspots, such as southern Afghanistan, south Thailand and Iraq, before being assigned to PNG. Reflecting on his previous postings, he said he’d come from places “oriented towards jihad, bombs, Improvised Explosive Devices… the last one in Kirkuk was when ISIS took Mosul”. It’s not surprising then that coming to Port Moresby was a kind of “break”.

In PNG, ICRC’s biggest operations are in the Highlands. It is here where the agency deals with the fallout of an almost constant cycle of tribal violence, while implementing their water, sanitation and hygiene (WASH), sexual violence, prisons, and health programs. In June, ICRC launched a short documentary which aims to raise awareness of the nature of tribal violence. The documentary aimed to open up a conversation, rather than exploring the underlying causes, outcomes and potential solutions of tribal war in the highlands.

To reflect further on the context of the documentary, Mark recently sat down with the Development Policy Centre’s Grant Walton and Michelle Rooney to share ICRC’s experiences with tribal warfare, its responses to conflict, and what others should do to address ongoing violence in the Highlands.

Mark argued that the intensification of tribal warfare in the Highlands has been due to three key factors. First is the availability of guns. Not only have guns become more ubiquitous, there are some who are acting as mercenaries, “Rambos for hire”, who are contracted by clans to fight against their enemies.

Mark also noted an interesting second factor that has helped to exacerbate conflict: the spread of mobile phone connectivity and greater mobility, which has meant that:

the fights spread out faster and on a larger area. It can also [mean] that people in a really different place [to where the main fighting is going on] just get attacked.

Finally, Mark was concerned that conflict has been exacerbated by an intergenerational struggle, where the young want to bypass more traditional routes to becoming a ‘big man’:

the young people, they want guns. They don’t want to wait too long to have power through experience and social acceptance of leadership… it gives them immediate power.

Tribal wars have horrific impacts on surrounding communities. While statistics are not available, ICRC’s documentary claims that non-combatants are being increasingly targeted. Reflecting on this issue, Mark said:

women, old people, wounded, are attacked. And kids are actually targeted, it’s not like they merely get caught in cross-fire. Basically, whoever is not fast enough to leave is a target. 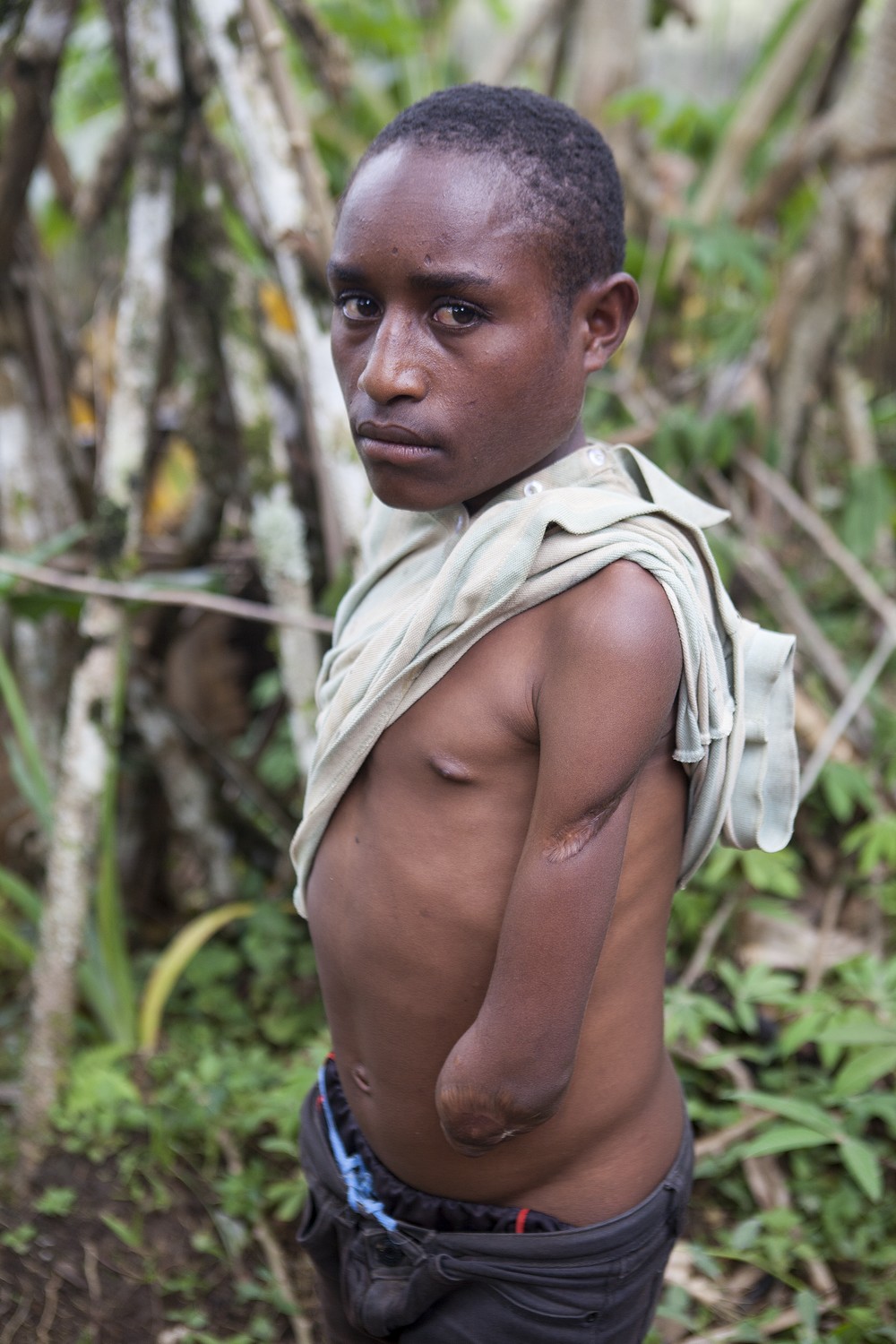 Robert Lepo, 11, from the Wambia tribe in Southern Highlands Province, was brutally attacked by a neighbouring clan during a now-infamous tribal fight that saw the village of Ragu decimated. At the height of the conflict in 2013, a grenade was thrown into a house sheltering women and children, killing dozens and leaving others with life-changing injuries. Robert, who was inside the house at the time the device exploded, managed to escape the inferno, but was attacked by machete-wielding enemy combatants while trying to flee the fight. (Jesse Boylan/ICRC)

Mark was also deeply concerned that rape is being used as a weapon of war, with combatants believing that they have a right to sexually assault women from the opposing side.

In this context ICRC works to alleviate the immediate needs of those affected by the violence:

one of the first things that we try to do is give [victims] basic goods that they need, [such as] toolkits to garden, and to be able to build houses. The basic idea is to give them a start to whatever new life they have and to take pressure off their host communities.

This is critical because the influx of those affected by war into neighbouring communities is often a source of conflict:

Host communities already have enough pressure receiving these people, but then if they have to share everything… That’s often one of the first points of conflict between host communities and the incoming displaced people. 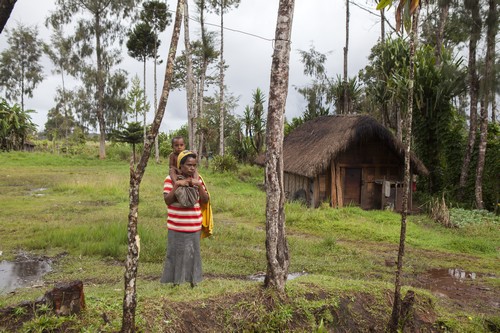 A mother and child displaced by tribal violence stand outside a hut in a host village providing them with temporary shelter. The woman’s extended family of 16 is being forced to share the coal-blackened hut with pigs, as they await the end of a tribal war that is preventing them from returning to their land. (Jesse Boylan/ICRC)

The ICRC is also piloting a program with two local health centres to deal with the outcome of sexual violence: “we’re working on training them on various subjects, for example on how to use post-exposure prophylaxis kits, which is what’s used to treat patients after sexual assault”. This is important, Mark says, because “many women and also men are not aware that sexual violence is actually a health issue”. As a result, women who have been sexually assaulted generally do not go to health clinics. 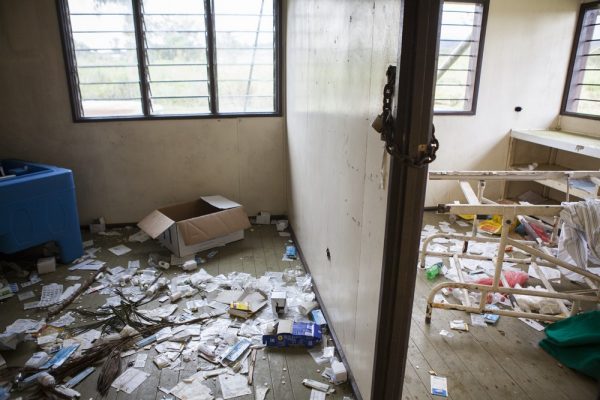 The wrecked rooms of a health clinic, destroyed in the midst of a tribal conflict. The clinic has stood abandoned for more than a year, with health workers too scared to stay in the village. Residents, including pregnant women and the elderly, are now forced to walk many kilometres to get treatment. (Jesse Boylan/ICRC)

This work complements ICRC’s ongoing awareness-raising efforts in communities, with the agency sponsoring a theatre group to recreate the ways tribal fights begin, and getting people to think about how tensions might be reduced.

Mark says that ICRC staff try, as best they can, not to get caught up in the conflict, but that is not always easy. Recently two staff members quit due to their connections to warring tribes:

they couldn’t work for us anymore because their clan had gotten into tribal fights, which affected them. They couldn’t go everywhere anymore with us… they told us, “We can’t work for you anymore.”

During the national election, when the potential for violence is heightened, ICRC ensured that staff limited their movements.

While ICRC plays an important role in ameliorating the impacts of tribal violence, Mark stresses that they cannot solve the issue alone. He urged others to do much more to help bring about sustainable peace. This includes investments in law and order, which is important but is by no means a magic bullet as, Mark says, police are already outnumbered and outgunned. “Yes, probably they do need more resources, more staff, more guns, more cars. [But, due to poor capacity] you just can’t give them all these things”. Instead, Mark suggests that initiatives that strategically intervene in the lead up to conflict could be more beneficial:

[with] most tribal fights… you could find solutions for them rather quickly. Be it a fair trial, be it a working judicial system, or good mediation.

Even after seeing the sometimes horrific fallout of tribal warfare, Mark is cautiously optimistic about the future of the Highlands: “I’m optimistic because they are an amazing people, and there is so much potential up in the Highlands”. He notes, however, that change has to come from “inside the Highlands”. Reflecting on the possibility of sustainable peace, he said: “I think things can be done but I don’t think there’s a quick fix”.

Grant Walton and Michelle Rooney are Research Fellows at the Development Policy Centre. Mark Kessler is Head of Mission for the ICRC in Papua New Guinea.

Mark Kessler
Mark Kessler is the head of the International Committee of the Red Cross (ICRC) Mission in Papua New Guinea. Graduating from the University of Zürich with a Masters in Applied Psychology, he has worked for the ICRC in a range of contexts including Iraq, Afghanistan, Congo, Haiti, Ivory Coast, Colombia and Thailand.