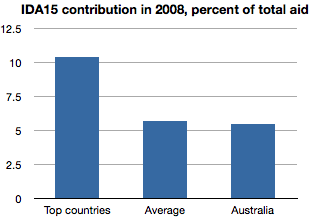 A strong case can be made that Australia should be contributing much more to the International Development Association: perhaps as much as $1.7 billion over the next three years, compared to $0.6 billion over the last three. But this will require not just a bold decision, but a quick one, as the IDA replenishment deadline is December.

As Australia considers how to scale up aid to meet its 0.5 per cent of GNI target, the World Bank is on a fundraising drive for its concessional arm, the International Development Association, to increase support for low income countries.

Rich country governments have been meeting over the course of this year to discuss the sixteenth three-year replenishment of IDA (IDA16), They now have only until December to make a final decision on how much support they will give IDA over the period July 2011 to June 2014.

Australia was the twelfth largest donor in the last replenishment, contributing A$583 million over three years or about 5 percent of total Australian aid. The most generous countries contribute about 10 percent of their aid budgets to IDA, but Australia’s contribution is about the average.

There is a good case for generous support to IDA:

If Australia is going to successfully double its aid program by 2015 to $8 billion from the current $4 billion, it will have to do things differently. Bold decisions will be needed, and quickly. A good place to start would be doubling our IDA support from five to 10 per cent.

Matthew Morris is a Research Fellow at the Crawford School and the Deputy Director of the Development Policy Centre.

Note: The calculation of IDA15 contribution to aid is based on one third of each country’s IDA15 pledge divided by their total ODA in 2008. The data is from IDA and OECD DAC.