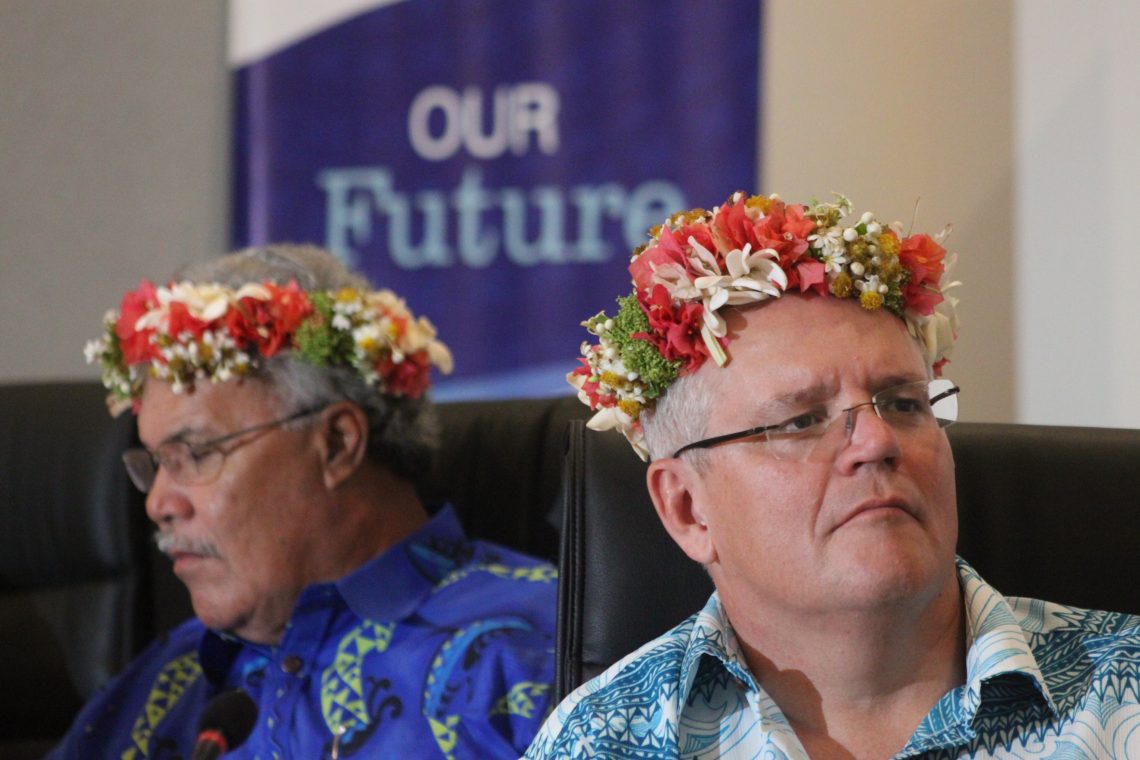 “Save Tuvalu, save the world” sang school children as they greeted the Pacific’s leaders on arrival to what became a showdown pitting the region against Australia. This was no ambush, but had been building for years. At the capital Funafuti’s airport the school children sat in a moat of water surrounding a diorama of a climate change devastated island. If it wasn’t obvious, the significance was explained to them by Tuvalu’s Foreign Minister. The symbolism was potent, and the ritual well established by the time Australian Prime Minster Scott Morrison was the last of the 18 Forum leaders to stride across the tarmac. Well briefed on what to do, he crouched to chat, showing up for the “step up”, but one major detail escaped advisers that marked the Australian delegation out. Pronunciations are important in all cultures, but when they spoke of Tuvalu, rather than speaking of “toovaalu”, it often rhymed with “toodaloo”. It was a warning sign that not everyone was speaking the same language.

The job at hand for the leaders of the island states was clear: they wanted to take a strong regional position to the UN Climate Summit next month. This framed what was to come when they sat down to butt heads over their communiqué. The process by which the communiqué was arrived at included what many delegates and some leaders, notably Fiji’s Prime Minister Voreqe Bainimarama, described as insensitive, and at times disrespectful and insulting, behaviour on the part of Australia. In public it was all smiles between Tuvalu PM and Forum chair Enele Sopoaga and Mr Morrison. However, Mr Sopoaga could not have expressed things any more clearly when he said, in response to media questions, “You are concerned about saving your economies, your situation in Australia, I’m concerned about saving my people in Tuvalu and likewise other leaders of small island countries.”

Australia had, in the words of Vanuatu’s Foreign Minister Ralph Regenvanu, “red lines” that couldn’t be crossed; mentioning coal, limiting global warming to below 1.5 degrees Celsius or a strategy for zero emissions by 2050 but said everyone made compromises. The communiqué is all about selective wording, and it and the appended “Kainaki II Declaration for Urgent Climate Change Action Now”, was agreed to by all Forum members. In Section 19 it laid bare in ten subsections what the Pacific leaders had called for. The “Kainaki II Declaration” captures calls from the Pacific island leaders in relation to:

Last October Mr Morrison announced he would not put any more money into the GCF after contributing $200m, but came to the Forum with $500m of repurposed aid forPacific nations to invest in renewable energy and ‘climate and disaster resilience’. Australia joined the United States in withdrawing from this key plank of the Paris Agreement.

What else have Leaders agreed to this year?

As before, the position of Leaders when it comes to West Papua was another focus of concern and one where there are lingering fault lines. Vanuatu had pushed very hard at lead up meetings for this issue to be given more prominence in the communiqué and for the position to be much more robust than has been the case in recent times. Other than the addition of reaffirmation of the recognition of Indonesia’s sovereignty over West Papua, the text that was decided by the Foreign Ministers has been accepted by Leaders. Vanuatu included the chair of the United Liberation Movement of West Papua, Benny Wenda, in their delegation. This signals clearly that this will be a key focus for the next Leaders’ meeting in Vanuatu. Indonesia’s irritation with Vanuatu’s achievements is evident and that has a flow on effect in terms of how Jakarta engages with the Forum more broadly.

Leaders have also tasked the Forum Secretariat to draft the ‘2050 Strategy for the Blue Pacific Continent’ for consideration at their next meeting. This is a significant piece of work for the Secretariat to undertake and build on other foundational documents including the Framework For Pacific Regionalism and the Boe Declaration Action Plan (endorsed by leaders at this meeting). It appears intended to be a concrete expression of the ‘Blue Pacific’ narrative that has permeated regional conversations recently.

Aligned with this is the Leaders’ endorsement of the ‘Blue Pacific Principles for collective PIF Dialogue and Engagement’. Increased interest in the region by new and established outside powers is not expected to wane any time soon. Leaders may hope that stating the rules of engagement clearly now will minimise the transaction costs associated with their current popularity.

By Friday and the Dialogue Partners’ Forum, where China easily skipped over Australia’s low climate change bar, Mr Morrison and Australian officials had grasped the pronunciation of Tuvalu but maybe not the full impact of what had just happened.

Leaders disagreeing over the final communiqué is not something new. What is new, although it began before last week, is the willingness of some to be openly critical of others, or more precisely, Australia. Some have pointed to the damage that this week’s events may do the “Pacific step-up”. Elsewhere we have seen calls for Australia to be sanctioned.

As leaders departed, they walked past that diorama and smiling children, with Mr Sopoaga waving them goodbye. The island had miraculously been rejuvenated, but the same could probably not be said for Pacific states’ relations with the big island starting with “A”.

Stefan Armbruster
Stefan Armbruster is an award-winning journalist based in Brisbane. He first worked in Fiji in 1994 before moving to CNBC, Dow Jones and the BBC in London. He is currently a correspondent with SBS regularly reporting from and on the Pacific. He also trains and mentors journalists in the Pacific region.