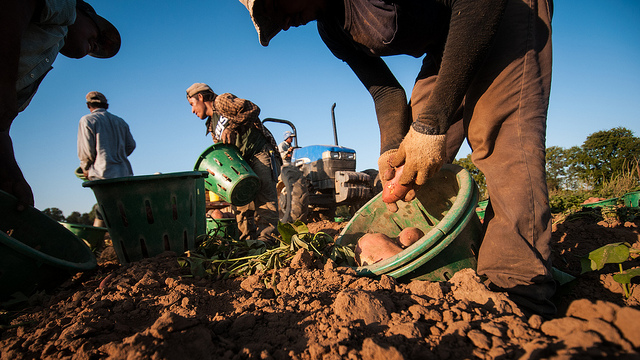 The Economist recently ran an excellent story on the pushback against migration in the OECD: excellent, because it summarised current policy debates, while drawing on the academic literature to critically analyse many of the commonly held arguments against migration.

Migration is one of the two main sources of public anxiety about globalisation (the other is trade). That much is clear. From Trump to Brexit to concerns about rorting of the 457 visa, there has been a reaction to migration across most OECD countries. That reaction has been strongest in relation to unskilled migration. But similarities end there. Concerns about unskilled migration, as with migration more broadly, do differ markedly across countries.

In the US, the primary concern has been that unskilled and low-skilled migration has held down wages of US workers. The empirical evidence to support this argument is not strong (see this excellent survey of the literature [pdf]). Early papers supported the idea that migration reduced the wages of unskilled workers (although not skilled workers). But these findings have since been rebutted by dozens of newer studies examining wages of unskilled and low-skilled workers. That has not shifted public perception though; the notion that unskilled OECD workers ‘lose out’ as a result of migration remains popular.

Much of this goes back to how we conceptualise migrant integration into a workforce. Migrants are commonly assumed to be substitutes for domestic labour, meaning more migrants should drive down overall wages. The evidence points to this not being the case, however. Newly arrived migrants are rarely perfect substitutes for native workers. Indeed, while evidence regarding the effects of migration on unskilled wages points to very little impact, studies do suggest that new waves of (unskilled) migration lower the wages of earlier (unskilled) migrants, with whom they have more in common (due to language skills, etc.).

There is also the opposite effect. Migration can serve to complement the domestic workforce, with low-skilled migrants boosting the productivity of domestic workers. Cooks, for instance, boost the wages of waiters, or restaurant managers (and vice versa).

In Europe, the more common concern has been that migration, and especially unskilled migration, has the potential to undermine the welfare state. At a macro-level, this fear is unfounded. Migrants in the EU have higher employment rates than Europeans, meaning that they strengthen rather than undermine the financial health of welfare systems. At a micro-level, however, such concerns can be legitimate where, for example, migrant communities are geographically concentrated and put additional strains on schooling or health systems. There is certainly a public policy challenge here. Centralised government systems must ensure that services are delivered where needed. But laying the blame on migration is misguided.

In Australia, concerns about unskilled migration have not been a significant element of public policy discourse. Certainly, there has been criticism of migration; recent examples include media coverage of the exploitation of backpacker working in the agricultural sector, and allegations that the 457 skilled visa category has been rorted. However, these have not specifically focused on the unskilled. Neither has the xenophobic streak to Australian politics, which is targeted toward ethnic and religious groups, and toward asylum seekers, but not the unskilled specifically (irrespective of the occasional lazy argument that migrants rely on welfare and take our jobs).

At the same time, we know the enormous benefits of migration for workers from developing countries, and especially for the unskilled. Working for just the minimum wage in Australia, migrants will typically earn order of magnitude more than they would had they not migrated. We’ve estimated the scale of those benefits recently for Pacific islanders in work we undertook with the World Bank, and found that the impacts go far beyond what can be generated through aid alone. Which is why we continue to advocate for expanding employment opportunities for Pacific islanders, especially for the unskilled who have no other migration channel to Australia.

What of concerns of brain drain, or the argument that as the ‘best and brightest’ leave, sending countries are left worse off? We can mitigate the risk of brain drain by targeting unskilled and low-skilled work opportunities, or at the very least, by not favouring skilled migration, which is what Australia’s present migration policy does. It is also worth noting that brain drain is not inevitable, and that its impact is contested in the academic literature. The article in the Economist last month pointed to research conducted by our good friend Satish Chand (formerly at ANU, now at UNSW) and Michael Clemens (CGD) in Fiji, which suggests that having the option to migrate actually stimulates investment in tertiary education. This incentive effect was large enough to offset any loss of skills associated with migration (although the Economist article doesn’t note the important fact that these extra tertiary students were self-funded – countries with free tertiary education and caps on places will need reforms to allow the supply-side response to occur.)

I’ll leave you to read the article itself – it’s an excellent and timely summary of public discussions on migration. If you want a more complete review of the academic literature on the subject, this survey [pdf] is also excellent. And of course, don’t forget our paper on the benefits of opening migration channels to Pacific islanders.