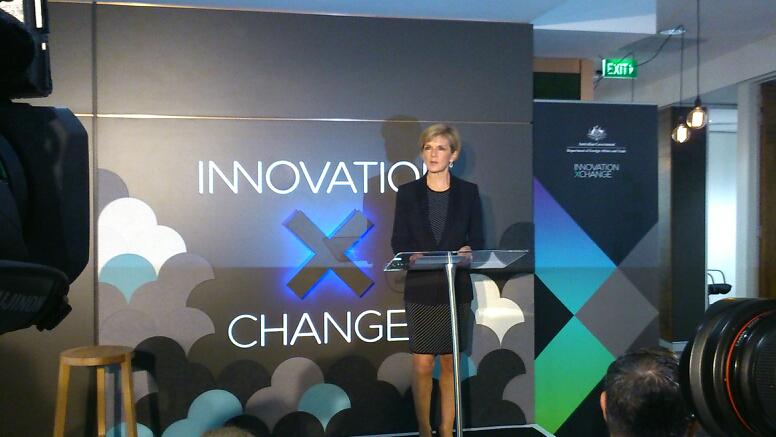 By Jonathan Pryke and Camilla Burkot

Describing it as “a new initiative to seek new ways of financing aid, to act as a catalyst for new approaches to development assistance, and to enhance Australia’s impact on sustainable economies in the Indo-Pacific region”, Foreign Minister Julie Bishop officially launched (full speech available here) DFAT’s innovationXchange on Monday 23 March.

The innovationXchange, with funding of $140 million over four years, has been through a long incubation period, having been announced almost a year ago as a part of Julie Bishop’s new aid paradigm. There has clearly been a lot going on behind the scenes, beyond the fitting out of a flashy new office space within DFAT (think floor-to-ceiling whiteboards, standing desks, plasma TVs and beanbag chairs).

It was already announced last year that $30 million of the funding associated with what was then the “innovation hub” initiative would be allocated to the Global Innovation Fund. Bishop’s speech featured several further announcements that give a good idea of how the innovationXchange will operate and the kind of work it will seek to engage in.

The first announcement, foreshadowed [pay wall] over the weekend by The Australian, was a $20 million contribution to a $120 million Bloomberg Philanthropies initiative, ‘Data for Health’, which was launched on the same day by Michael Bloomberg. The innovation appears to consist, at least in part, in the use of mobile phone technology for birth and death registration, and health surveys. It is not clear at this stage how the Bloomberg/Australian initiative will engage with existing efforts, supported for example by UNICEF and WHO, to strengthen health information and civil registration systems.

The second announcement was SEED Pacific, another $20 million project, extending to mid-2018. DFAT is currently seeking tenders from managing agents together with consortia of more specialised organisations able to collectively deliver on the project’s aim, which is to find “businesses that are prepared to show leadership and innovation in the Pacific”, and foster developmentally beneficial partnerships between them and local business ventures. The winning consortium will work with DFAT over a six-month period to “co-create” the project design. While the launch itself was light on detail, the Request for Tender [pdf] provides more information.

The third announcement was a new “ideas challenge”, a project that will look to encourage creative thinking from within the ranks of DFAT staff, about everything from passports to international development.

The launch also featured a panel discussion with some of the members of the innovationXchange’s illustrious International Reference Group. The group is dominated by business figures but also includes public sector and academic expertise. Notable among them is Bjorn Lomborg of the Copenhagen Consensus Center, whose presence at the launch caused some controversy given his criticisms of climate change and environmental “alarmism”, which are regularly quoted by Coalition ministers.

Beyond the announcements, Bishop framed the innovationXchange as part of a broader departmental effort to increase the focus on effectiveness, efficiency and outcomes in Australia’s aid program. Ms Bishop was clearly conscious of the uphill battle she was facing in demanding innovation from the famously conservative and risk-averse DFAT, illustrated by Secretary Varghese’s comments on the then-unlaunched hub at Senate Estimates in February.

The new announcements, together with the previously announced contribution to the Global Innovation Fund, account for half of the funding associated with the innovationXchange initiative. That leaves about $17.5 million per annum unallocated, over four years, from which the overhead costs of the initiative – which might be considerable – will presumably be deducted. That’s not a lot, and the initiative still has to do something about the undertaking Bishop gave last year to help mobilise new sources of development financing, including through “assistance with arranging private debt and equity, as well as guarantees and insurance to offset risks”. That, if it happens, won’t come cheap. The innovationXchange website also foreshadows potential projects relating to humanitarian aid, and the oceans.

While the innovationXchange initiative will evidently escape the impact of the crippling cuts that will be inflicted on the Australian aid program from July 2015, it is hard to imagine that the mainstream, downsized, change-weary areas of the Australian aid program will have the budget flexibility, expertise and energy to engage in much innovation. Efforts to garner innovative ideas from DFAT’s staff notwithstanding, the reality of the aid cuts now underway means that innovationXchange might well end up operating in relative isolation within its own relatively limited budget.

Jonathan Pryke and Camilla Burkot are Research Officers at the Development Policy Centre.