In past Development Policy Centre blog posts about the Promoting Effective Public Expenditure (PEPE) survey, Colin Wiltshire (here) and Andrew Anton Mako (here) have described the enormous challenges facing rural, particularly remote, schools in Papua New Guinea. This post focuses on the metropolis: it explores positive and negative changes that have occurred in three urban schools in PNG over the past decade.  But first, some background.

In 2002, the World Bank and the National Research Institute (NRI) of PNG jointly undertook research into funding for, and the condition of, schools and health facilities in the country. Following a wide-reaching quantitative survey (followed up in 2012), researchers conducted in-depth qualitative research with 12 schools in four ‘provinces’ – the National Capital District (which incorporates Port Moresby), East New Britain, Eastern Highlands and Morobe. This research resulted in the publication of the Wok Bung (Tok Pisin for ‘working together’) report. It found that while there were numerous factors contributing to improved performance of schools, community involvement in school affairs was often crucial for success.

Ten years later and the NRI, this time with the ANU’s Development Policy Centre, revisited these 12 schools to see how they had fared. Three were located in an urban centre – Port Moresby – while the rest were in rural locations. In this post I draw on conversations with head teachers (principals), teachers, administration staff and parents from these three government-run schools in Port Moresby: Koki primary school (located near the popular but sometimes dangerous Koki market), Tatana primary school (located on Tatana island, which is linked to the mainland by a causeway, 12 kilometres north-west of the central business district) and Hohola primary school (a few kilometres north-east of the central business district). As can be imagined, many issues were discussed with respondents, including the quality of teaching, academic performance and national education policy. Here I will report on respondents’ perceptions about infrastructure and community participation (both key issues for respondents, and central to the Wok Bung report). The other issues I will cover in future posts.

As we are speaking of schools, I thought it fitting to describe the results in terms of a proverb that reminds me of school play grounds: ‘what is lost on the roundabouts is gained upon the swings’.

All three schools have seen some improvements over the past decade. In Hohola a new toilet block, drinking taps, desks, benches and fencing have been provided through funding from donors, government, non-governmental organisations and parents. At the time we visited, the school was also in the process partitioning a room in the library, which would house new computers (presented to Hohola and other schools by National Capital District Governor Powes Parkop). The computers promise to greatly improve student’s IT literacy, and there was great hope that the school would add to this initial contribution over time.

Over the past ten years Tatana has started to address what the Wok Bung report identified as its most serious problem: a lack of water. The report noted that on most school days children had to take their own water to school, and that the school was often closed due to poor water supplies. To address this, a water pump was installed in 2010 to transfer water from a tank located in the nearby village. The infrastructure was supplied by InterOil and managed and housed by the president of the school’s board of management. This new infrastructure has meant that teachers do not have to leave the school to collect water and that, on most days, children no longer carry their own water from home. The school still experiences days when water is scarce, but respondents agreed that the situation has vastly improved since 2002. 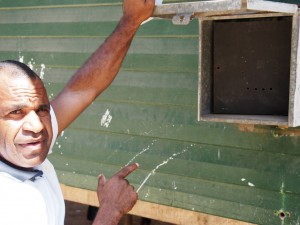 Security was a key issue for all schools. To address this, Hohola and Tatana have recently had surrounding fences repaired; resulting in a marked drop in crime. For example, before the fence was repaired in 2011 – by funds provided by Governor Powes Parkop – Tatana primary school was constantly being broken in to. In 2010, raskols broke into the school and stole fuses, lighting and wires (see picture) – classrooms are still without electricity. But, after repairs to the fence, the school has not recorded a single break in.

While respondents from all schools complained about the lack of community involvement, there were numerous examples of individuals giving up their time to make the school a better place. A member of the Koki parents and citizens committee told of his efforts to ensure greater transparency and accountability within the school’s management body. Hohola engages parents and community members in working bees – although the frequency of these events has reduced in recent years. From time to time the school also organises local non-governmental organisations to deliver talks and training for teachers and students.

While there have been tangible improvements to infrastructure at these schools, much more is needed. This was evidenced by the large (and dangerous) holes in the floors and stairs at Tatana, the creaking pre-World War Two buildings of Koki, and a shortage of teachers housing in all schools. In one school, the lack of teachers’ housing was so acute that a classroom was transformed into sleeping quarters. Even when money was spent on infrastructure it didn’t always benefit the schools. For example, in Tatana a toilet block, supplied by a new water tank, was built in the mid-2000s; however, as a water pump – needed to pump water from the tank to the toilet – was never delivered, the toilet facilities have not been used. Instead, students use pit toilets – built with funds secured by the school’s board of management – while the water tank rusts and the toilet block is boarded up.

Respondents reported a decline in community engagement. In 2002 the Wok Bung showed that Hohola had forged strong relationships between it and the community. But our interviews with respondents in 2012 revealed difficulties in getting the community involved in the school. For example, a senior teacher – a jolly man with a booming voice – who’d worked at the school for more than a decade, was concerned that parents’ involvement was dropping: ‘They [parents] clean up on working bee days, but this does not occur as much as previous years’. He lamented that unlike five or ten years ago, parents and community members do not like doing things for free: ‘now everyone needs money to survive’.

Many respondents also expressed frustration that those in the community did not value or trust the schools. In one school, teachers and board of management members told stories about school property turning up in nearby houses, despite community pledges to take responsibility for the school’s security. For their part, parents complained about school management. There were rumors of missing funds, hidden budgets, nepotism and secret meetings. Asked about community involvement in the school, one grade six teacher said it was almost non-existent because, ‘at the moment the community does not embrace the board of management’. He called for ‘greater coordination and harmonisation between the board of management, administration, student representatives, staff and church representatives’. Unfortunately, as the Wok Bung report highlights, his comments echoed that of his predecessors ten years earlier.

Some expressed concern about the government’s free education policy, introduced in 2012. While parents embraced the initiative, teachers were concerned about its long-term effects. In Hohola, a senior teacher was concerned that since the introduction of the free education policy parents have been less willing to volunteer or provide funding for special projects. ‘They hear the word “free” and think the government is responsible [for everything]’, he said.

While primary schools in Port Moresby are surrounded by better infrastructure than most of their rural counterparts, they still have their own unique set of challenges. For the schools we visited, while there have been some improvements, the blight of under-spending, possible mismanagement and misdirected funding is apparent.

Comparing our visit to these schools with their description in the Wok Bung report gave us a sense of déjà vu: the schools were facing similar sorts of issues to those identified by the Wok Bung report. For example, in 2002 some schools thought they had turned a corner in securing their premises; in 2012 respondents were similarly hopeful, even though they recounted stories of break-ins and thefts over the past decade. To ensure that the gains made over the past ten years are not wasted, it is crucial that maintenance of existing infrastructure is prioritised. New computers need IT support, fences need repair and water pipes need to be safeguarded. All of this requires funding.

Although government, non-governmental organisations, the private sector and donors play a key role in providing funding and expertise, it is imperative that communities play an active role in school affairs. Community members help improve school management and resources by demanding transparency and accountability, and by helping with security, management and even maintenance. But revisiting these three schools – ten years since the Wok Bung report found that community involvement was crucial for school success – brings up numerous questions around engaging communities, such as:

These questions, and others about the involvement of local communities in school affairs, are equally important for head teachers of Papua New Guinean schools as they are for donors, government, businesses and non-governmental organisations working in this area.