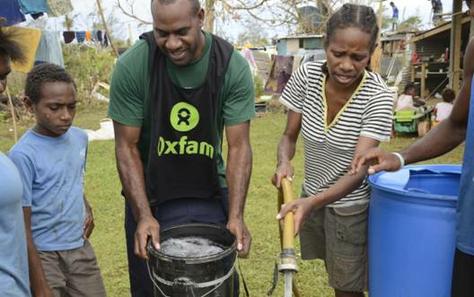 Vanuatu: a brave nation responds to the storm

As they respond to the effects of severe tropical Cyclone Pam, residents of the small but amazing island nation of Vanuatu are showing the world how to cope with adversity. Pam has been described widely as a ‘monster cyclone’. The system, one of the strongest ever to make landfall, packed wind gusts of over 300kph and destroyed the homes of 75,000 people. With such a ferocious battering, the most remarkable thing about Cyclone Pam is that so few people died. The Vanuatu government estimates there were 11 fatalities. Clearly most people knew what to do and where to be when the cyclone hit.

Perhaps it is not so remarkable they knew what to do. People in Vanuatu know about cyclones. On average, two or three affect the island nation each year. A middle-aged person living in Vanuatu today would have seen more than a hundred cyclones develop in the warm tropical waters that surround the archipelago. With so many of them, cyclones are part of Vanuatu’s collective cultural memory. Over thousands of years people have learned to build houses to weather the storm: low to the ground, and lashed together to flex in the wind. People grow gardens in gullies and forests, and rotate them to mitigate risks. Some bury root crops underground and dry breadfruit in their cookhouses as emergency food supplies. When the winds are truly violent, people know which caves to go to, and which rocks to shelter behind.

To understand how Vanuatu deals with disasters, we have to understand a little of the country. Vanuatu is a unique nation. With over one hundred indigenous languages, the country is a family of communities scattered across 80-plus islands. While many people are moving to the ‘bright lights’ of the capital, the vast majority live in rural villages. They generally make their homes from local materials, and derive their livelihoods from gardens, from the reef and from the fruits of the forest. The country is one of few places in the world where the traditional economy still plays a greater role in peoples’ lives than the cash market.

People in Vanuatu have a vast store of indigenous knowledge and wisdom to help them deal with cyclones. However not everyone lives a traditional lifestyle, and even the most robust coping mechanisms cannot deal with the sheer devastation wrought by a category 5 supercyclone (category 5 denotes the strongest of cyclones). Pam stripped some of Vanuatu’s islands bare, laying waste to forest and villages alike. There is no doubt that people are hurting now. On islands like Tanna – home to 30,000 – nearly everyone has lost their home and their crops. For many, their water supply is not safe to drink.

To avoid an ongoing humanitarian catastrophe we must work alongside the people of Vanuatu to respond, and recover, from Cyclone Pam. Right now, people need shelter, food and water. The Vanuatu government is working with UN agencies, international and local NGOs, and military from friendly nations to get supplies where they are needed. This is no mean feat. Vanuatu is a logistical nightmare, with communities scattered across remote islands, poor road infrastructure and limited shipping or air services. Coordinating the response, so that aid agencies and others work together, is extremely difficult. 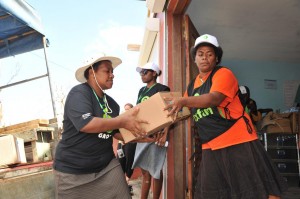 Despite serious challenges, the humanitarian effort in Vanuatu is almost as amazing as the place itself. Nearly everyone agrees on the need to work together. The National Disaster Management Office (NDMO) holds daily briefings with aid agencies to share information and plan the disbursement of much-needed supplies. This coordination is not an accident. In 2011 a ‘Vanuatu Humanitarian Team’ (VHT) was established to support the work of the NDMO. Coordinated by Oxfam, with support from the United Nations Office for the Coordination of Humanitarian Affairs (UNOCHA), the VHT has enabled government and other humanitarian actors to prepare together for disasters and to respond in a more coordinated way. In Vanuatu right now, government and aid agencies work together in specially-designed ‘clusters’ to provide emergency shelter and protection, water and sanitation, and food. By working through these clusters, they are able to identify immediate needs or gaps in the provision of humanitarian assistance, and to avoid duplication of efforts across the country.

It is too early to say definitively that disaster preparedness work has helped to save lives in Vanuatu, or has improved coordination of the response to Pam. What we do know is, by the time Pam struck, the VHT had already had plenty of practice responding to emergencies, including Cyclone Jasmine in 2013, and Cyclone Lusi in 2014. Indeed Lusi, a much weaker cyclone, killed nearly as many people as Pam (there were 10 confirmed deaths).

It is more important than ever that we invest in disaster preparedness in Pacific island countries, and work with island communities to adapt to a changing climate. In many ways, Cyclone Pam is a window on our collective future. In the context of a warming climate, more severe cyclones are expected to become more common. Some scientists even suggest a new ‘category 6’ rating will be needed to reflect this reality. For small island states, we know the impacts of cyclones will continue to increase as rising sea levels exacerbate storm surges and coastal inundation.

Cyclone Pam is a powerful reminder that we must act urgently to reduce our carbon emissions. As the world considers a new global climate agreement, to be decided in Paris later this year, each country must make strong and binding commitments. Australia in particular, with its addiction to coal exports, is a laggard in the global negotiations. If we don’t convince our governments to act now, innocent people will reap a whirlwind of destruction for generations to come.