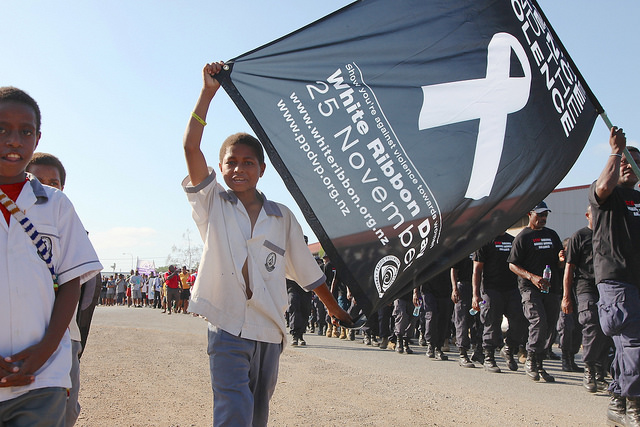 Violence against women must stop

My appointment as a White Ribbon Ambassador in 2012 reflects my long-term commitment to ending violence against women.

On White Ribbon Day we remind ourselves of the global impact of violence against women and the devastating impact it has on individual women.

In wearing a white ribbon we make a personal pledge committing to take action to stop violence against women. We acknowledge that while a lot of good work is being done across the world to end violence against women, there is still a long way to go. The statistics remain deeply disturbing.

Globally more than one in every three women has been beaten, coerced into sex, or abused in some other way, most often by someone she knows, including her husband or another male family member. Australia is not immune. One in six Australian women has experienced violence from a current or former partner, and so far this year, 63 women have been killed. For Indigenous women the situation is even worse – they are 34 times more likely to be hospitalised as a result of family violence.

Violence against women is a significant violation of women’s human rights and severely limits a woman’s ability to participate in every day social and economic life. While it has profound and long lasting impacts on its victims, violence against women causes broader suffering among children, families, communities and society as a whole.

The Australian Government has made it clear that Australia has zero tolerance for violence against women, and is resolute in its commitment to end the scourge of domestic and family violence and sexual assault. We are doing this both domestically and internationally.

In January, the Australian Government elevated the issue of women’s safety to the Council of Australian Governments and in September, the Prime Minister announced a $100 million package of practical measures to help keep women safe, deliver better frontline support and services, and provide resources to help parents, teachers and students change young people’s attitudes to violence. Of this funding, $21 million was committed to specific measures for Indigenous women and communities.

Under the direction of our Foreign Minister Julie Bishop, Australia has, through its aid program, demonstrated its commitment to supporting and partnering with other countries to end violence against women. And, we are seeing good results from the work we support in the Indo-Pacific region and beyond. For example, in Papua New Guinea we are assisting Voice for Change, a woman’s human rights organisation working with a local provincial government to develop by-laws to eliminate harmful practices such as polygamy, bride price and the torture and murder of women accused of sorcery. We are also helping women and their children in Afghanistan and Pakistan affected by violence to access health and justice systems, and we continue to support the Fiji Women’s Crisis Centre for its work in the Pacific region.

Violence against women is unacceptable, anywhere, anytime. As a White Ribbon Ambassador, I urge all Australians to stand up on this White Ribbon Day and take a stance to end violence against women. It requires our collective efforts so we can achieve lasting change in Australia and around the world. This is not just for the benefit of women and girls, but for all of us.

Ewen McDonald is Deputy Secretary of the Department of Foreign Affairs and Trade and a White Ribbon Ambassador.

Ewen McDonald
Ewen McDonald is Deputy Secretary in the Department of Foreign Affairs and Trade, Australia.