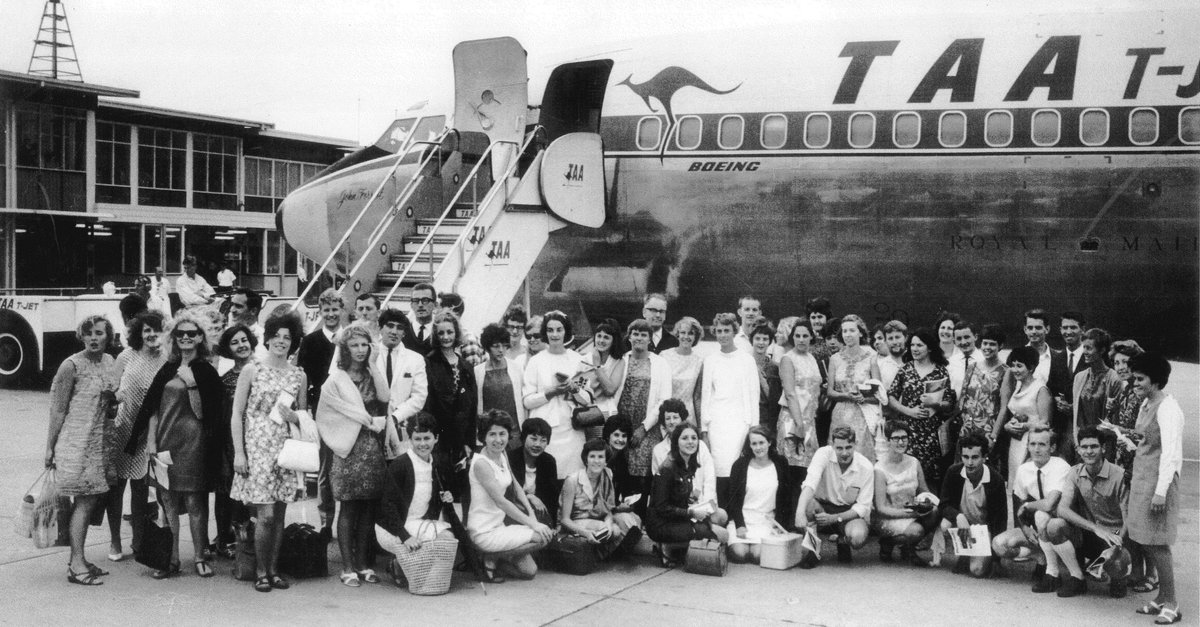 Australian volunteers in Sydney in 1968, prior to leaving for PNG (Credit: AVI)

Volunteers in the aid program: a history

Peter Britton’s Working for the world: the evolution of Australian Volunteers International tracks the history of the Australian international volunteer program from its humble origins in the Volunteer Graduate Scheme (VGS) to Indonesia in 1951, to what is now AVI. The VGS aimed for a better understanding and closer relationship between Australia and Indonesia. This was the basis of the Overseas Service Bureau (OSB) formed in 1961, which expanded from Indonesia to the rest of the developing world. OSB changed its name to Australian Volunteers International and then AVI in 1999.

The book opens with an expansive forward by retired High Court Justice Michael Kirby, and goes on to map the story of AVI through three eras. The first era reflects the enthusiasm of the 1950s and 1960s, a period of rapid change in the Australian community and its relations with the wider world, part of which was an enthusiasm for volunteering abroad among young graduates. Jim Webb, who had been working with VGS since the early 1950s, had a vision of expanding the work beyond Indonesia and was instrumental in setting up OSB. The first meeting of OSB was in 1962, and the first set of ten volunteers under Australian Volunteers Abroad (AVA) departed in January 1964. Most went to Papua and New Guinea (as it was known pre-independence), three to the Solomon Islands, and one to Tanganyika and Nigeria in Africa. The high point of that decade was in 1968, when 97 volunteers went abroad. This was a period when OSB had the respect of government, which funded the volunteers and some of OSB’s other costs. Webb and OSB also had a leadership role in the establishment of ACFID as a peak body of international NGOs and worked closely with it over the following five decades.

The second period the book covers is the 1970s, a period marked by a backlash against the enthusiasm and idealism of the 1960s, and characterised by a more instrumental approach to volunteering. A sharp division emerged between returning volunteers who wanted a greater say in how the agency operated, and a more “establishment” leadership and board who resisted both these pressures and change more generally. This was also a period of stagnation, so that by 1980 the volunteers deployed were a little over half of that a decade before. Tensions arose with those in government who were concerned with the low visibility of the program and OSB’s reluctance to expand it. This led to both internal and government reviews, the upshot of which was a renewed OSB with a new executive director and a largely new board from early 1982.

The third period, under Bill Armstrong as executive director (from 1982 to 2002), was a period of growth at a time when Australian government-NGO relations were very strong. Armstrong also brought a marked shift from the 1970s by adopting a more activist approach on human rights and social justice. There was a lot of work in support of the anti-apartheid movement in Southern Africa. When Cambodia was isolated in the 1980s, OSB took a lead in having a government-funded NGO office there. Most significantly, in Timor-Leste OSB provided UN volunteers to administer the independence ballot, and also supported the team working with Xanana Gusmao before and after his release from prison in Indonesia.

The final section of the book is probably the most interesting as it covers case studies from Indochina, Africa and the frontline states, Indonesia, Papua New Guinea and Pacific islands, and Timor-Leste. In each of these cases the volunteer program was associated with a social or political justice program. In the case of the frontline states it was to support those affected by the fighting for the end of apartheid. In the case of Cambodia, OSB played a central – if unusual – role with its volunteers in the Joint Agency NGO Office, which acted, as the book describes it, as an “unofficial [Australian] embassy” during the transition to recognition in 1989. In Indonesia, the difficult issue of a volunteer on rural development project being expelled in 1986 for reasons that were unclear, led to positive interactions both with the Australian Embassy and parts of the Indonesian government, testimony to the respect in which OSB was held. In PNG and the Pacific, OSB’ s role again was more than providing volunteers; it also supported nascent NGOs and their peak bodies, such as PIANGO.

The book ends at 2002, which is a pity as the growing hostility to NGOs in some sections of government led to a reduction in AVI’s scope when, from 2005, private providers were used as well as AVI to send volunteers. Finally in 2017, AVI was again responsible for the delivery of the whole volunteer program in consortium with consultancy firms Cardno and The Whitelum Group.

Despite this limitation, this book is important as it provides readers with a fuller understanding of the role of NGOs, and volunteering in particular, in the Australian aid program. It complements other histories of NGOs such as my own NGOs and political change: a history of the Australian Council for International Development, and Susan Blackburn’s 1989 work Practical visionaries: a study of Community Aid Abroad.