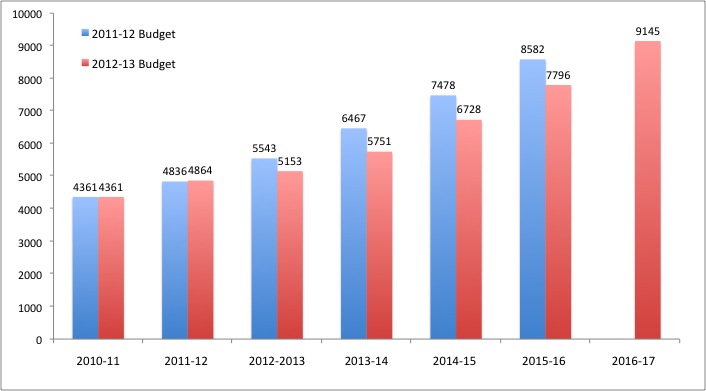 Weak on quantity, strong on quality: the 2012 Australian aid budget

The 2012-13 Australian aid budget, delivered last night, pressed the pause button on the ascent of Australian aid as a percentage of our economy (GNI) towards the previously bipartisan target of 0.5% by 2015. That ratio was at 0.35% in 2011-12, and was meant to increase to 0.38% in 2012-13, but instead will stay at 0.35% for another year. This means an increase in aid not of $700 million as originally planned, but only $300 million. After inflation that is about a 4% increase. It is one of the lower growth rates we’ve seen in the Australian aid budget since it began its dramatic expansion in 2001-02. In the 12 years since, on average the aid budget has grown (after inflation) by 6% a year.

Because of the small increase in this budget, the government felt compelled to push the 0.5% target back by a year from 2015-16 to 2016-17. You can see how the scale up has been pushed back between the last budget and this budget in the graphs below, first in terms of dollars (our estimates), and then in terms of the aid/GNI ratio (official figures). 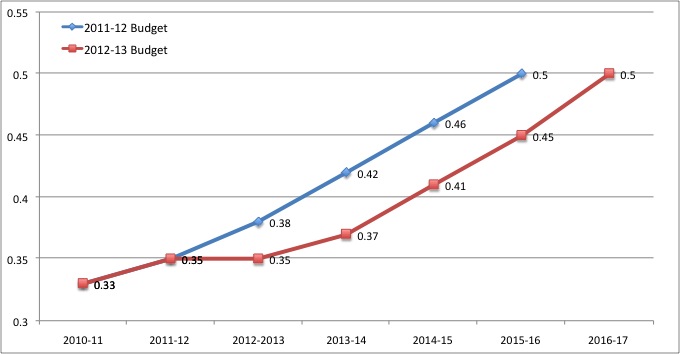 Even with a year’s delay, it will be a steep climb to get to 0.5, requiring, on average, increases of about $1 billion for each of the next four years from 2013-14 to 2016-17. The aid program has never had an annual increase of anything close to $1 billion. The biggest increase was $626 million in 2008-09, the second biggest $500 million in 2005-06. Even with looser fiscal constraints, it will not be easy to sustain support for a single $1 billion increase, let alone for four such increases consecutively. Yet this is what it will take to get to 0.5% under the new timetable.

Are we serious about 0.5%? Not if this or recent past budgets is a guide. True, the government only delayed the target by a year. But if we are serious about it, we have to shift from modest aid increases of half a billion or less to large, one-billion-dollar increases. Whether a bipartisan consensus can be re-established around a delayed 0.5 target, and whether governments then have the courage to translate that target into large increases year after year remains to be seen. There will certainly be plenty for supporters of aid to campaign about.

Are we serious about quality?

Not all aid spending is equal, and aid quality is just as important as aid quantity. Though it will probably go little noticed, the budget did contain a number of aid reforms which push forward the aid effectiveness agenda. These require careful study before anything definitive can be said, but overall the budget seems to be several steps in the right direction on the effectiveness front.

Some of the details are explored in the two companion budget blogs by my colleagues, Matt Dornan (on geographical allocations) and Dinuk Jayasuria (on accountability reforms). Here’s my brief checklist, with six positives, and two negatives: see my pre-budget blog for the background and the Independent Review of Aid Effectiveness (disclaimer: in which I participated) for many of the details.

And now the two negatives:

In summary, I come away from the budget not that convinced that we will get to 0.5%, but reassured that aid effectiveness should improve. Perhaps lifting effectiveness will help generate more support for more aid. I live in hope.

Stephen Howes is Director of the Development Policy Centre. This is part of our series on the 2012 aid budget. The other two parts are available here and here.