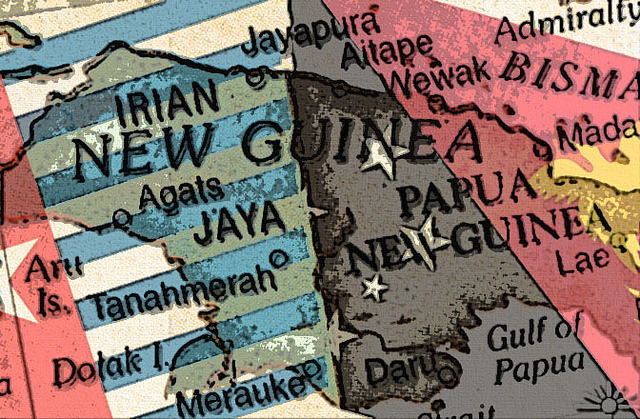 West Papuan refugees in Papua New Guinea: on the way to citizenship?

At Rainbow settlement in Port Moresby, 38 families of West Papuan heritage live in a drainage ditch approximately 100 metres wide by 200 metres long. To one side, the neighbours’ retaining wall contains pipes which direct runoff water and rain directly into the settlement. On the other side of the settlement is a construction site that doubles as a soccer field for Rainbow’s children. The houses are small structures built with a patchwork of materials that reveals the recent history of external engagement — tarps from the United Nations High Commissioner for Refugees (UNHCR), plywood from a church fundraiser, plastic chairs from a West Papuan who lives outside the settlement. In the context of increasing efforts from Papua New Guinea (PNG) authorities to register West Papuan refugees and provide citizenship status, this post flags some of the relevant historical context and reflects on current challenges. As Papua New Guineans including Oro Province Governor Gary Juffa have suggested, citizenship is not sufficient to improve West Papuan refugees’ living conditions.

Over 100 West Papuan refugees have been living in Rainbow for the past eight years, since being evicted from 9 Mile settlement. According to one community leader, 22 babies were born to refugee families in the settlement in 2015. The children are entitled to access public school education and health services though their residency status remains ambiguous. But like other urban residents in Port Moresby’s settlements, many children do not attend school because their parents struggle to afford sufficient food, clean clothes, transport or extra costs associated with school.

In Rainbow, the women are the primary income earners. They sell fish and shrimp at the local market near the settlement. A few of the middle-aged men, it was explained to me, had held government jobs but struggled with mental health effects of displacement, insecurity and what researchers have called ‘sakit hati’ — an Indonesian term that literally translates to ‘heart sick’ — but which also conveys anger and resentment (Rees and Silove 2011). These feelings interfered with the ability of some refugees to cope with daily life, and some men in the settlement left their jobs.

Community leaders also described feelings of resentment related to the failure of the PNG government to properly assist them to resettle. Specifically, these refugees want land. A community member passionately asserted, ‘We don’t belong in a drain’. They want to grow food for subsistence and for sale, to have sufficient space to be together as a community, and to establish a permanent connection in a cultural context where land is strongly associated with identity and status. Unfortunately, this particular desire makes the Rainbow refugees a lot like many other urban residents with insecure tenure in settlements in Port Moresby (Rooney 2015 [pdf]). As with urban settlers elsewhere in Melanesia, these are people whose rights to care, investment and protection from the state remain ambiguous (Keen and Barbara 2015 [pdf]).

Unlike Papua New Guineans in settlements, West Papuan refugees, mainly civilians and villagers who were not fighting against Indonesian rule, were displaced to PNG as Indonesia’s military forces worked to eradicate Papuan resistance beginning in the 1960s. Over the years, the exodus is estimated to be about 13,000, most in 1984, when 11,000 crossed the border (Glazebrook 2014:2 [pdf]). Today there are an estimated 1500 West Papuans living in Port Moresby.

Refugees may continue to see themselves as having unresolved land claims in West Papua. As one Rainbow community member said, ‘In West Papua, I have land. I am a landowner, and I would like to go back to my land.’ But that, he says, is impossible as long as Indonesia governs.

PNG has struggled to implement a refugee policy and system, especially for West Papuans living outside the former UNHCR camp at East Awin in Western Province (Glazebrook 2014:1 [pdf]). Citizenship applications were criticised as prohibitively expensive, at 10,000 kina. In December 2015 the PNG government reported it was processing citizenship applications from 3000 refugees from East Awin, and the fee was waived. Recently, more statements have been made about the government’s commitment to registering and providing citizenship to West Papuan refugees. However, some refugees in Port Moresby have questioned what difference this status will make in the absence of supports towards their basic needs. A leader at the Rainbow community remarked, ‘I do not want citizenship unless the government gives us land’.

The rights and treatment of West Papuans is a sensitive political issue in PNG, and policy towards these refugees has historically been affected by political consideration for the relationship with Indonesia. The permissive residency visa initially arranged for West Papuans at East Awin prohibited them from engaging ‘directly or indirectly in any political activity that might affect the good relationship between the governments of PNG and Indonesia’ (cited in Glazebrook 2014:3 [pdf]). PNG government leaders typically see Indonesia as an important economic and political ally, and Indonesia has been clear that it will reward governments that support its sovereignty in Papua.

West Papuans in PNG carry with them experiences that cannot be depoliticised, but avoiding them because of what they might represent, voice or destabilise is in effect enacting another layer of violence. Perhaps the current mobilisation towards citizenship is an opportunity for the PNG government to acknowledge West Papuan refugees’ experiences of past violence in Indonesia. This would be in keeping with both what West Papuan peace activists want and what Indonesian leaders agreed to in the 2001 law on Special Autonomy for Papua (Braithwaite et al. 2010:97).

Politics writ large shapes the identity, sense of community and history of West Papuans in Rainbow, but the everyday politics of getting children to school, putting food on the table and keeping families healthy and together are equally valued. There is a need for research to reveal more about what policies and interventions will help alleviate their health, land, education and livelihood challenges, both as urban settlers and as political refugees.

Following the unfolding story of registration for citizenship and changing immigration status for West Papuans in settlements also provides a unique opportunity to better understand how processes of documentation, recognition and dedicated attention could improve the circumstances of other Melanesians living in informal settlements in Port Moresby and beyond.

Jenny Munro is a Research Fellow with the State, Society and Governance in Melanesia (SSGM) Program at ANU. This post was originally published as SSGM In Brief 2016/19.

Jenny Munro
Jenny Munro is a Research Fellow with the State, Society and Governance in Melanesia (SSGM) Program at The Australian National University.