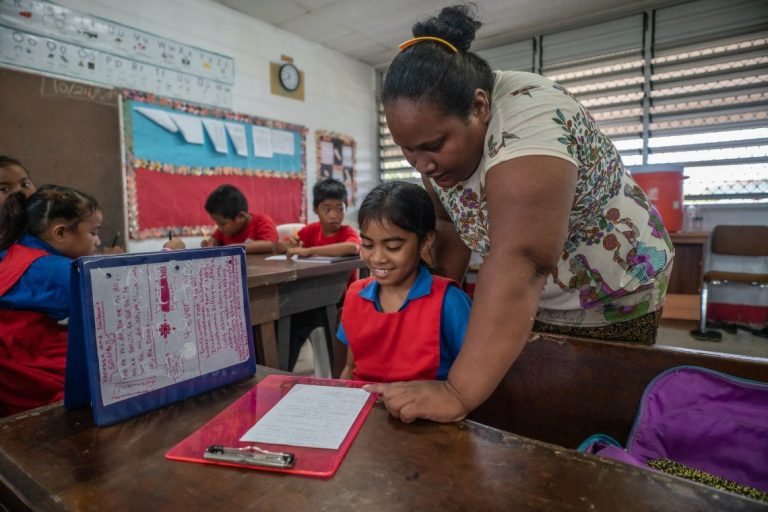 Between 2009 and 2018, the New Zealand government’s inflation-adjusted aid budget increased by about 41%. Over the same time, as the first chart below shows, New Zealand’s spending on education – which in 2009 received about one third of New Zealand’s sector-allocable aid – barely grew.

Yet, within New Zealand’s nearly-stagnant education spend, dramatic changes were afoot. The chart below shows what happened to primary education. 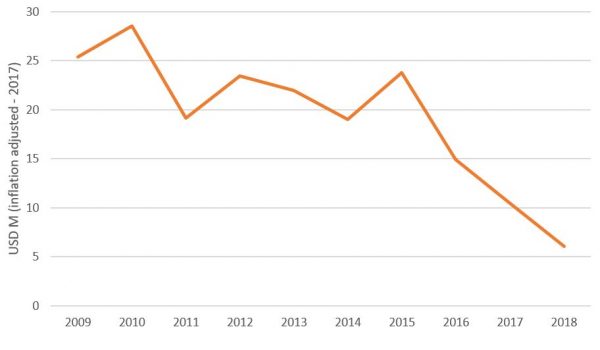 Funding for primary education collapsed. Why? How? What happened?

This chart provides the first part of the answer: as primary education fell, tertiary education spending consumed an increasing slice of the education pie. 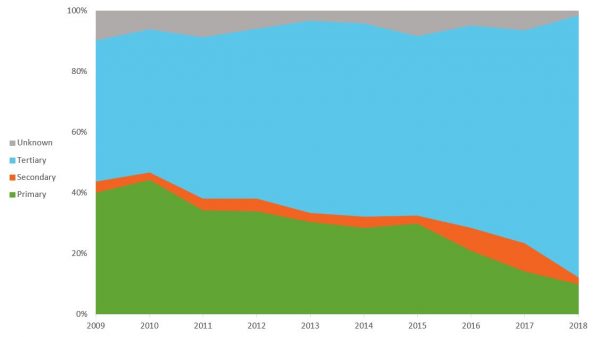 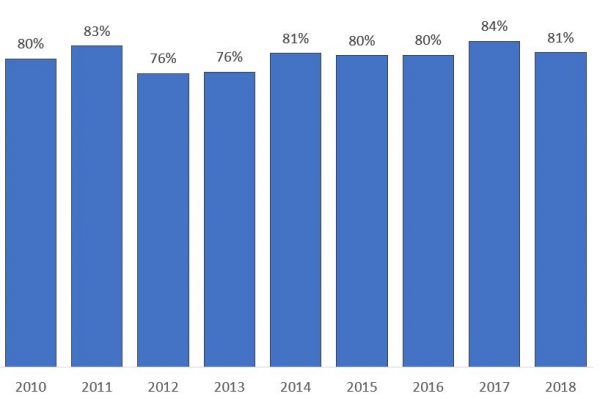 The figure is approximate: it’s the best I can do with available data. Another attempt using different sources suggested an even greater scholarship focus. Also, New Zealand funds some tertiary scholarships at institutions like the University of the South Pacific (USP) in Fiji, as well as some scholarships for short term training in-situ. Such scholarships are not captured in this chart. If they were, scholarships might increase by as much as 10 percentage points.

High-level outcomes identified in the Programme results framework are contributing to New Zealand’s strategic interests, the achievement of development outcomes for partner countries, and the strengthening of country-to-country ties.

Development is mentioned in the passage, which is fair. The aid program does try to promote development through scholarships, but it’s only one goal of three: the other two are about benefits for New Zealand.

This doesn’t mean scholarships should be abandoned with all funding transferred to primary education. In New Zealand’s case though, re-balancing is required. The chart below shows aid devoted to scholarships in donor countries for most OECD DAC donors in 2018. (The US is missing as it doesn’t provide this information to the OECD.)

Aid devoted to scholarships as share of all aid 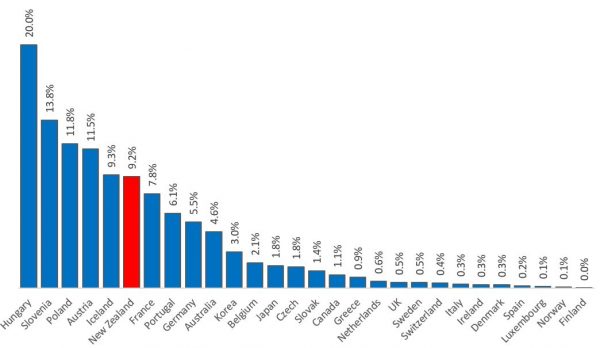 In 2018, the median DAC donor devoted just under 2% of its aid to scholarships. New Zealand was well above the median. Only five countries focused on scholarships more than NZ, and three of them – Hungary, Slovenia and Poland – are new donors and hardly models of good aid practice.

When myself and others voiced concerns about scholarships to the aid program in 2018, they told us they were planning to reduce New Zealand’s scholarship emphasis, but it would take time because many scholarships were for multiyear courses. This may well have been the plan, although numbers from page 44 of 2020-21 MFAT budget documents here don’t demonstrate a clear intent to decrease scholarships. Now, of course, coronavirus will have brought a rapid fall in scholarship spending.

What should New Zealand do once borders start to reopen? Returning to scholarships as usual would be a return to bad aid. New Zealand’s education spend needs to refocus: much less on scholarships and much more on other forms of study. Aid for primary education should increase. Aid for other levels of education such as secondary and other forms of training should also grow. I accept this can’t happen overnight, but the aid program needs to produce a publicly available plan, with a timeline and stated targets for improvement.