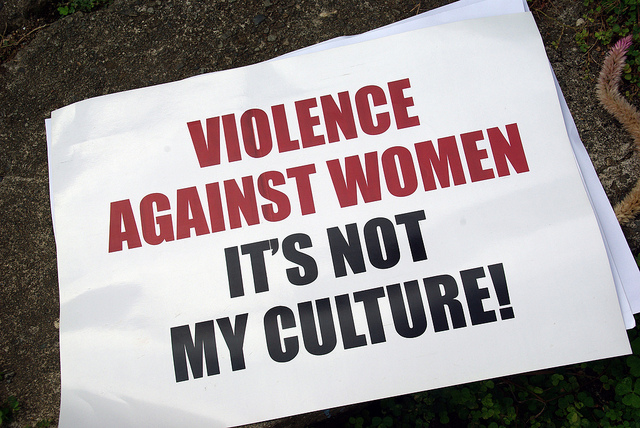 What’s culture got to do with it? Causes of intimate partner violence

In my two homes, Australia and the Solomon Islands, gender-based violence is an issue that has risen on the political and media agenda recently. However, the issue is framed differently in each context, with troubling consequences.

In Australia, there is understanding among policy makers and the general community that violence can happen to women from all walks of life and the problem is often framed in terms of individual characteristics and behaviours of perpetrators – such as poor mental health, drug and alcohol abuse, and generational patterns of abuse. There is also acceptance that certain “cultures” (e.g., in sporting clubs) can have features that support violence against women, and programs are developed to encourage more respect for women. A range of services, such as men’s support groups, mental health support, refuges, and family counselling, are provided by both the government and non-governmental organisations to deal with the problem.

In Solomon Islands for many years there were only local, church-run refuge services and pastoral counselling regarding gender-based violence. However, in the past decade international agencies have increased funding to address reported high rates of gender-based violence, particularly after the civil conflict from 1998 to 2003. Initiatives include a new Eliminating Violence Against Women policy by the Ministry of Women, Youth and Family Affairs, Safenet (a referral network for people affected by violence), a new Family Protection Act with greater penalties and reporting requirements, and a DFAT-funded program called Safe Families that includes community and provincial funding for violence prevention (though at this stage only in two provinces, and services are still only available in Honiara).

Frames of “culture” and “women’s rights” have dominated discourse in the development sector regarding Solomon Islands’ high rate of gender-based violence. The two are often linked – i.e., the assumption that Solomon “culture” leads to views of women as inferior to men, leading to low levels of political participation and representation and high rates of violence. Bride “price” or payment from the husband’s family to the wife’s family during traditional weddings is another often-cited “cultural” factor.

The only major research report available on gender-based violence is the Solomon Islands Family Health and Safety Survey [pdf], prepared by the Secretariat of the Pacific Community in 2009. It replicates, with slight modifications, methodology used for the World Health Organization’s Multi-country Study on Women’s Health and Domestic Violence against Women and interviews around 3,000 Solomon women.

This survey debunks certain myths – namely that violence against women by their partners is a product of low development levels on the national scale or education on the individual level. It finds instead that intimate partner violence is largely unrelated to most socioeconomic and demographic indicators, such as the age, education, employment, income and marital status of women.

The report turns to cycles of violence (such as perpetrator and survivor seeing or being subject to violence as a child) as a contributing factor. Men who are violent to others are more likely to be violent towards their wives, as are those who saw women and children being hit or were hit themselves when they were growing up.

Cultural change can legitimise violence as traditional gender norms shift. Qualitative interviews in the report point out that the view that bride price signals “ownership” of a man over a woman is a new perversion of the tradition that was formerly about cementing relationships between two families. Nonetheless, this new interpretation of what bride price means is used to legitimise violence against women. Pre-colonial behavioural norms that provided some protection for women, such as a belief that warriors who hit women were considered “weak”, have eroded in modern times.

Despite all this complexity, the headline figures from the report have been used to emphasise Solomon “culture” as a causal factor of violence. For example, Andrew Mason, the gender co-ordinator for the World Bank’s East Asia and the Pacific Region, said in an interview that the report “means that societies in the Pacific have a higher tolerance for men abusing their spouses. And in fact what’s interesting is that it’s a culture that includes not only male views, but female views. One thing we find, which was surprising and a bit disturbing frankly, is that 70 per cent of women in the Solomon Islands also say that under certain circumstances that husbands beating their wives is acceptable”.

The most common “circumstance” cited by women as providing justification for wife beating in the survey is if a partner finds out the woman has been unfaithful (63%), followed by disobedience (41%) and if he suspects infidelity (27%). Anecdotally people say affairs have risen in the post-conflict period, and jealousy and possessiveness are also common causes of domestic disputes. However, it is an awkward subject, and one that is usually brushed aside, with disobedience being given more airtime by the development sector as a perceived common justification for violence in Solomon Islands. This reinforces frames of cultural difference between Solomon Islands and, for example, the UK, where studies have also identified affairs and disputes about control as the most common circumstance men use to explain their violence (see, for example, here).

When surveyed about specific incidences of violence that had happened to them, women reported the most common situations contributing to violence is that male perpetrators were drunk (in Honiara) or were involved in disputes about affairs (in the rural provinces). A 2014 study of men and women admitted to the National Referral Hospital for domestic violence incidents also found alcohol was involved in many cases, although more data is needed to see if it was consumption by the male, female or both.

The underlying assumptions that men can hit women for transgressing certain expected behaviours (such as fidelity or obedience), and that blame can be attributed to alcohol rather than self-control, are shaped by culture and found in cultures worldwide. However, circumstances have arisen in Solomon Islands, due to modern pressures, that add fuel to the fire. One is particularly aggressive marketing, distribution and consumption of alcohol (the major source is Solbrew, owned by Heineken, but homebrew alcohol is also common). Sudden influxes of cash rents and payments to men for mining and logging (which can be readily spent on alcohol rather than the family’s expenses) are another contributor.

My own research suggests that, rather than a static “culture”, rapid changes to Solomon society and gender relations may account for the apparent rise in domestic violence. Over three months in 2013, I conducted a workshop in Honiara where participants each wrote a story on the theme “peace and conflict” and then collectively analysed the causes and manifestation of conflict. Participants framed the topics themselves, and used fictional stories to problematise, comment on and explore current social and political issues. Gender was an issue explored in narratives about identity conflict and those about interpersonal conflict.

The workshop participants described change and insecurity in gender roles as covering both male and female characters. Women are under pressure to fulfil domestic and economic roles (many are their family’s primary breadwinner) while being excluded from politics, and often limited in movement and social relations. Men are subject to increasingly violent models of masculinity and threats of violence while also taking on other domestic, economic and political roles.

In such an environment, a dialogue on how men and women can work together to change competitive and violent dynamics in relationships and families is needed to build peace. However, a focus on “culture” as portrayed in development discourse can lead to, at worst, a male backlash in Solomon Islands (as women’s rights advocates are seen as overly influenced by foreign ideas and organisations), and, at best, an exclusion of a broader understanding of the pressures and triggers to violence.

A starting point for balancing the frames applied to gender-based violence in Australia and Solomon Islands is the admission that most cultures have norms around protection of women and children and also, sadly, beliefs that support violence against them. The assumption that Australia is “safer” for women than Solomon Islands is questionable – in Solomon Islands a woman may be statistically more likely to be hit by her husband, but in Australia a woman is more likely to be murdered by her partner. But attempting to rank these things, or to attribute them to a particular locale’s or ethnic group’s “culture”, is unhelpful to understanding violence as a complex problem.

Rather, it is more useful to focus on how attitudes and dialogue influence behaviour, as well as what the common individual causes and triggers for gender-based violence are. As there has been in Australia, longitudinal studies (for example, here) and in-depth qualitative research (for example, here and here) are needed in the Solomon context to better understand why men are violent, what role men and women have in legitimising this violence and, critically, how this can be changed.

Dr Anouk Ride is a researcher based in Solomon Islands. Her most recent paper, “Involving Participants in Data Analysis”, discusses her experience of participatory data analysis of conflict.

Anouk Ride
Dr Anouk Ride is a Scientist at WorldFish in Solomon Islands.