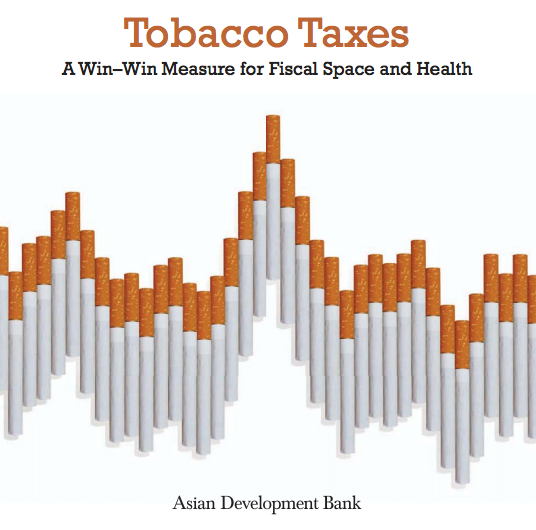 Who pays, and who benefits, from increased tobacco taxation in Asia

Two-thirds of the world’s tobacco users live in just 15 countries, and 5 of these high-burden countries are in Asia: People’s Republic of China, India, Philippines, Thailand, and Viet Nam. In the absence of intervention, smoking will eventually kill about 267 million current and future cigarette smokers who are alive today in the five countries.

A recent report led by Professor Prabhat Jha, and just published by the Asian Development Bank, assesses how changes in cigarette taxes can reduce consumption, thereby saving lives in these high-burden countries, whilst simultaneously raising much needed revenues for governments. The report finds that in the five countries, a 50% price increase, corresponding to a tax increase of about 70%–122%, would reduce the number of current and future smokers by nearly 67 million and reduce tobacco deaths by over 27 million. It would also generate over $US 24 billion in additional revenue annually.

One of the most interesting and new findings in the report is that the poorest sectors of society benefit the most from the tobacco tax increases but shoulder the least share of the tobacco tax increase. This is an important finding because tobacco companies often oppose tax increases under the guise of saying such price increases are regressive: that is, the tax reprepresents a higher proportion of a poor person’s cash than that of the rich. But the research in this report turns that claim on its head.  The report notes that because the poor have the least disposable cash to begin with, they are the most sensitive group to price increases of tobacco. They are therefore then the most likely group to quit or not take up tobacco in the first place. Indeed, careful and conservative modelling suggests that only 6.1% of the increased tobacco tax will be borne by the poorest socio-economic groups in Thailand over time.  The vast majority of the increased tax will be paid by middle and higher income earners in Thailand who have higher disposable incomes to absorb the price increase. Yet whilst the poorest sector in Thailand bears only 6.1% of the increased tax, the poor then also end up enjoying a disproportionate share of the health benefits ultimately attributable to reduction in smoking induced by the increased tax. The report shows that an estimated 58.1% of all the deaths averted by now not smoking would occur in Thailand amongst the poorest socio-economic group. The poor’s share of the health benefit (measured in terms of averted death from tobacco related disease) is also always larger than the poor’s share of the increased taxation in the other countries of the study: China, India, and the Philippines, often by a wide margin.  That the poor benefit disproportionately by not smoking as a result of tax increases makes intuitive sense as well, as WHO finds that smoking prevelance is higher amongst the poorer sectors of society, and that there is some evidence to suggest that the poor are more susceptible to tobacco related illnesses.

Ian Anderson is a Research Associate with the Development Policy Centre. He was a contributing author to the Report. The full report is available here.