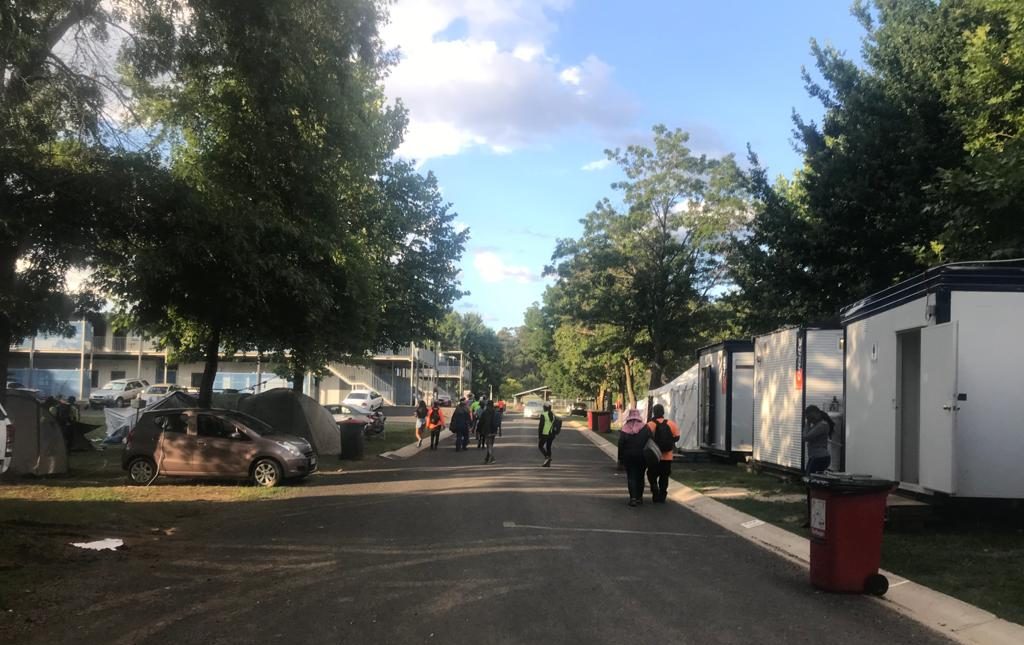 Temporary home at the campground with the fruit picking workforce

Who we are and what we eat: policy, ethnography and blueberries

This COVID summer, seeking to better understand migration and food in Australia, I took leave from the ANU and went fruit picking. In this series of five blogs, I draw on this experience to sketch some of the stories behind how our food gets on the table, convey a picker’s perspective on the policy issues that matter, and contemplate what it all means for the national conversation about who we are and what we eat. Agriculture and migration are rich fodder for pundits, but the lived realities behind them remain opaque to most. This series seeks to lift the curtain.

The execution of this idea was fairly painless. I threw a tent, camping chair and a tangle of clothes into the un-spacious interior of my Suzuki Alto and made for a town in the foothills of the Australian Alps where, amidst mild days and cool nights, fruits from the northern hemisphere thrive. There were charred hilltops and the merest glimpses of snow. The final stop was a shaded caravan park with a mountain stream tumbling through it and maybe 250 pickers camped out for the season. Another 150 or so lived down the road at hostels in town.

I had signed on as a ‘casual’ labourer with a global agribusiness. They had two sites nearby, row after row of berry bushes, packing shed at the centre. Picturesque for a moment in the morning but a stark vision of industrial monoculture in the harsh light of the long day.

The least complicated part had been getting employed – a matter of filling out an online form which I did in about fifteen minutes, no CV, phone interview or letter of reference required. Information about when and where to turn up was conveyed by text message which directed me to an official Facebook page – I would be in Charlie Team, whatever that meant.

It was drizzling when I arrived. While I put my tent up in the mud, pickers slept-in and milled around, grateful for a break, annoyed at the disruption, praying, like all farmers, for just the right amount of sun. Rain makes the berries grow, but you can’t pick them till they’re dry.

The dominant narrative about pickers is that they are exploited. True, many of them are newcomers to Australia, and this is a category that has its vulnerabilities, but they are also adults who are capable of pursuing their own interests and looking after their own welfare.

Probably, I thought, there was a need to come at this issue with nuance – the goodwill of primary producers, the ability of the pickers to look after themselves, and the presence of various regulatory bodies are all undeniably real, although so too are the pressures that might tempt labour hire companies to try to cut corners. Of course, I could never see it all, but whatever was happening it was worthy of at least trying to glimpse first-hand.

International migration became progressively more important to the Australian harvest throughout the 20th century, but it was only in the 21st century that temporary labour from abroad become a mainstay of the workforce.

There are two main pathways. The largest is the Working Holiday Maker (WHM) visa, now available to young residents of over 44 countries. By working on farms (for a minimum of 88 days in their first year and a minimum of six months in their second), WHM visa holders can secure an additional year in Australia for a maximum of three. In 2019-20 over 35,000 took it up.

Smaller but rapidly growing is the Seasonal Worker Programme (SWP). In 2018-19 some 12,200 people from the Pacific and Timor-Leste came to Australia on six to nine month stints under the SWP, an eightfold increase since 2012. Post COVID the SWP is about half the size it was.

In January 2021 there were around 44,000 WHMs in Australia, down 100,000 from a year before. The scarcity of these workers, so often taken for granted, has only served to underscore how essential they have become.

While you can open any tabloid and read about how established Australians tend to avoid harvest work, one aspect of this situation that has escaped public attention is that newer arrivals, in particular those who have come as part of our humanitarian intake, are often happy to take the opportunity.

To my surprise the people I found myself living and working amongst were overwhelmingly of African origin – music from the Congo and Kenya echoed from the tents around me, and in the camp kitchen they were cooking moambe stew. Living with them I would learn they ranged from youngsters who had just finished school in Melbourne (and had the accent to show for it) to whole families a year out of Ugandan refugee camps, but the common factor was that whatever their origins Australia was now home, and agricultural work was a well-worn path to getting established. On the harvest trail a lack of language skills are rarely a barrier to making good money, but as I was to discover, there are no guarantees.

My first evening in the caravan park was a hubbub of transplanted domesticity. Music and cooking, a badminton game in progress, people strolling around visiting neighbours. My new neighbours nodded good evening as they walked by. The WHMs mostly rented double rooms in demountable cabins. The African-Australians mostly preferred powered campsites. There were some Timorese around too, but not with the SWP, something that is significant, and I will discuss later in this series.

Sitting on my folding chair beside the stream that first night my thoughts revolved around the momentum that had brought everyone here from so far away and along so many distinct paths. How to channel this energy without allowing it to sweep away hard-won wages and conditions? What had been a warm dusk had become a chilly starlit night, and what had been a lively scene was now quiet, everyone had turned in early. I checked the company Facebook page in the dark – buses to the berry farm would be leaving at six.

This is the first in a series of five blogs on migration and agriculture in Australia reflecting on my experiences as a fruit picker earlier in the year. You can find all five blogs at #fruit picking series.

Michael Rose
Michael Rose is a Research Associate of the Development Policy Centre.