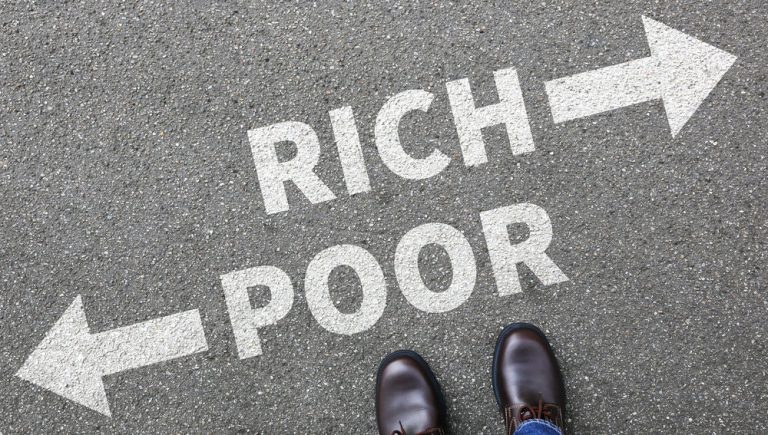 Why are relatively poor people not more supportive of redistribution?

Social commentators and researchers struggle to explain why, despite growing inequality in many countries around the world, there is often relatively limited support among poorer people for policies where they are set to benefit (such as increases in cash transfers or in the minimum wage). Recent research drawing on surveys from the United States and Europe has identified a potential reason for why poorer people are not more supportive of redistribution: they don’t realise they are poor. These studies illustrate that the majority of people tend to think they are positioned around the middle of the national income distribution, regardless of whether they are actually rich or poor.

Conventional theories of preferences for redistribution, such as the Meltzer-Richard Hypothesis, imply that if poor people were made aware that they were relatively poorer than most other people in their country, they would become more supportive of redistribution. Yet there is little empirical evidence that evaluates this prediction. There has only been one survey experiment (of 1054 people in Buenos Aires) that directly tests the effect of informing people they are poorer than they thought, and it showed that this led to greater support for redistribution. However, some related research suggests the effect could be in the opposite direction for a number of reasons. For example, laboratory experiments have shown ‘last place aversion’ can exist, whereby relatively poor people often prefer when there are people who are poorer than them. As such, more empirical evidence is needed to understand how poorer people’s misperceptions of their relative position in the national income distribution affects their support for redistribution.

How I approach answering this question

I conducted the first cross-country survey experiment on preferences for redistribution in the developing world (paper – co-authored with Franziska Mager – available here). The experiment involved over 16,000 respondents in five developing countries that make up almost 25% of the global population (India, Nigeria, Mexico, South Africa and Morocco). In each country, there were around 3,200 people that make up a representative sample of the population with internet access (we used the Canadian firm RIWI which conducts online surveys using random domain intercept technology). This meant respondents were younger, on average, and more likely to be male than a truly nationally representative sample. A limitation of the study is the findings are only generalisable to the population with internet access (although I show in the paper that the results are qualitatively similar when weighted by age and gender to match the national population).

To test whether informing poor people of their relative position in the national income distribution makes them more supportive of redistribution, I randomly allocate half of the respondents in each country to be told which quintile their household belongs to in the national income distribution (based upon their reported household income and the number of household members). Prior to the treatment, respondents were asked where they perceived their household is positioned in the national income distribution, what they thought the level of inequality is in their country, and what they would prefer the level of inequality to be. After the treatment they were asked if they thought the gap between the rich and poor was too large and whether the government was responsible for closing this gap. Our survey experiment is better placed to test the channels through which information is having an effect than previous studies because our sample size in each country is around three times larger (i.e. more statistical power to examine heterogeneous treatment effects) and we more extensively solicit people’s prior beliefs.

A ‘median bias’ exists: people disproportionally think they belong to the middle of the income distribution 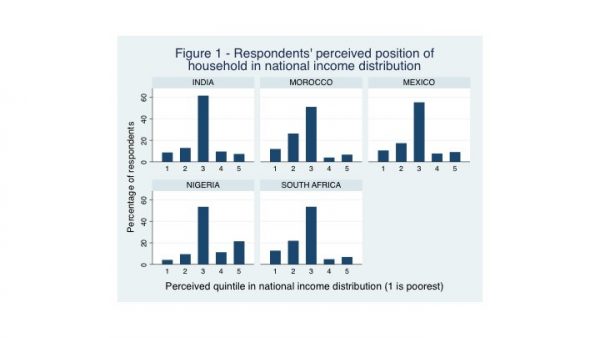 Surprisingly, telling poor people that they are poorer than they thought makes them less concerned about the gap between the rich and poor in their country

This is shown in Figure 2 below. Respondents in the treatment group are between 3.9 to 6.7 percentage points less likely than those in the control group to agree that the gap between the rich and poor in their country is too large. This effect is driven by respondents who had expressed prior to the treatment that they prefer low levels of inequality in all countries (except Morocco) and is mainly attributable to respondents in the lowest quintile. 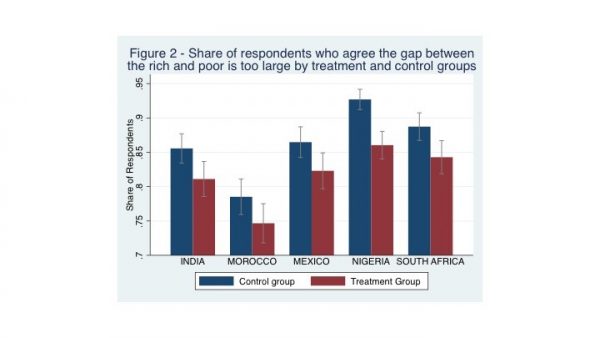 A plausible channel that is causing this effect is people using their own living standard as a ‘benchmark’ for what they consider acceptable for others. In the paper, I modify a seminal economic theory to illustrate how people update their beliefs in the way I observe. Put simply, prior to the treatment the subset of respondents we focus on stated they thought their household’s standard of living would position them in the middle of the national income distribution (or even towards the top in some cases). Receiving the treatment led people to realise two points. Firstly, there are fewer people in their country with a living standard they considered to be relatively poor than they had thought. Secondly, what they had considered to be an average living standard (their own standard of living) is actually relatively poor compared to other people in their country. I show how both of these points would lead people to respond by being less likely to be concerned about the gap between the rich and poor in their country.

Importantly, ‘benchmarking’ means there are opposing channels through which poorer people’s preferences for redistribution respond to information about their relative position. On the one hand, poorer people may be more supportive if they are set to benefit from redistribution. However, on the other hand they may be less supportive if they are less concerned about the absolute living standard of people who are relatively poor. This can help to explain why poor people are not as in favour of greater redistribution as what you might expect.

This article was first published on the World Bank’s Development Impact blog.