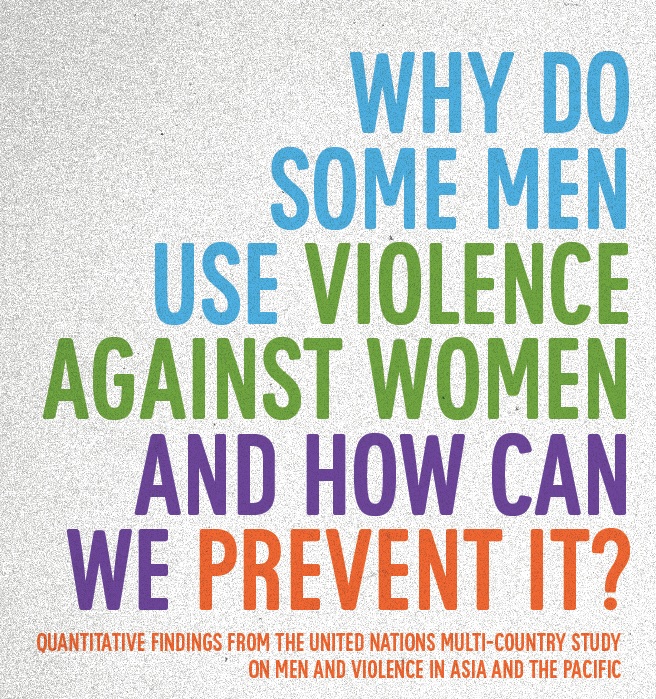 Why do some men use violence against women and how can we prevent it?

Why do some men rape? Looking for reasons behind gender based violence in Asia and the Pacific

We know that gender based violence (GBV) is a problem with widespread social and economic impacts. In Papua New Guinea, there are staggeringly high rates of family and sexual violence, and our own research has highlighted the culture of impunity stemming from low conviction rates in Lae.

GBV is an area that still suffers from a chronic data shortage. Information on the underlying causes of the violence has been especially hazy, often blamed on a vague cocktail of culture, conflict and attitudes towards women.

So why do some men use violence against women?

That’s exactly the question a new report from Partners for Prevention sets out to answer, drawing on data from the UN Multi-Country Study on Men and Violence in Asia and the Pacific.

The report, which covers six study sites in the Asia-Pacific (Bangladesh, Cambodia, China, Indonesia, Sri Lanka and Bougainville in Papua New Guinea) and surveys 10,000 men, has attracted a lot of media attention since its launch on September 10.

Here’s a handful of the headline-grabbing stats from the report and a quick video summary:

Beyond the fast facts, there is a wealth of information in this report, too much to fully explore in a single blog post.

For those with a specific interest in PNG, there are some fascinating findings, even though the survey was only undertaken in Bougainville so it is not nationally representative.

In Bougainville, compared to the five other sites, the study found:

Yet, in Bougainville, men surprisingly reported much higher rates of being arrested or jailed than other study sites. The report doesn’t delve too far into the reason for this unexpected statistic, though it does note that in Bougainville this interpretation included traditional forms of community-based detention and arrest. Men in Bougainville also reported much higher rates of punishment or retaliation from friends, family or community members than in other study sites. The higher levels of retaliation, detention or arrest may also be a consequence of Bougainville men also reporting the highest prevalence for non-partner rape—the study found overall that men who perpetrated partner rape were much less likely to face legal consequences.

There is a discrepancy in the level of reporting of violence between the women and men surveyed in Bougainville, with men reporting a higher prevalence of intimate partner violence than women. This difference is a reminder of the inherent challenges in gathering this type of data. The report suggests a number of reasons for this: that in contexts in which partner violence is rela­tively normalised, there is less shame and stigma for men to admit perpetrating violence than for women to admit experiencing it; where impunity is common, women’s fear of further violence is likely greater than men’s fear of legal repercussions; and that men (and women) may fail to recog­nise the coercive nature of their (or their partner’s) behaviour when it comes to sex within marriage.

Bougainville was one of two post-conflict sites in the study—the other was Papua in Indonesia. On the whole, these two sites showed the highest levels of GBV, but the report authors wrote that it was ‘impossible to know to what extent this common feature is a product of their being in a similar geographic area and possibly having cultural commonalities’ or due to the history of conflict.