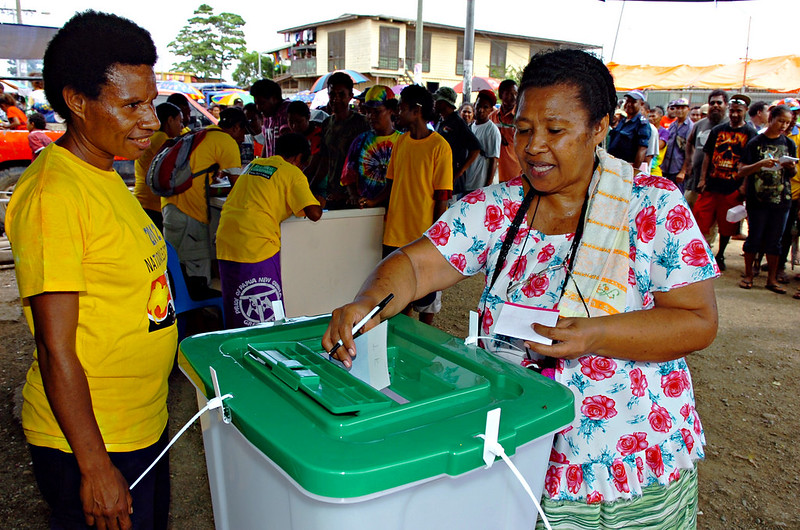 Papua New Guinea became one of only four countries in the world to have no female members of parliament (MPs) following the 2017 national election. The 2022 national election, now underway, provides a critical opportunity to remedy that situation.

Following the 2017 election a national Forum on Women Candidates’ Participation in the 2017 PNG Election, was convened in Port Moresby on 17-18 August 2017 by UNDP-PNG. A Sub-National Forum of Women’s Political Participation was also held in Madang on 28 September 2017. These Forums made a range of detailed recommendations regarding the actions that needed to be undertaken by PNG stakeholders to improve the performance of women candidates at the 2022 national general election.

The Pacific Women’s Political Empowerment Research Group, based within The Cairns Institute at James Cook University, has tracked the extent to which these Forum recommendations have been implemented by stakeholders over the 2017-2022 electoral cycle. The findings are summarised in the report ‘Preparations for increasing women’s success at the 2022 PNG national election over the 2017-2022 electoral cycle’.

Considerable work has been undertaken by a range of stakeholders to support aspiring women candidates, despite the challenges of the COVID-19 pandemic over the period 2020-22. However, the analysis suggests that women are once again likely to struggle to get elected in 2022.

The key Forum recommendations that were failed to be implemented included:

With 3458 male candidates compared to 167 female, what guarantee is there that women will be successful in this election? The sheer number of male contestants is indicative of the belief that parliamentary seats are a male preserve.

The one key Forum recommendation which, if implemented, could have guaranteed the election of women was the adoption of TSMs. As Orovu Sepoe has documented, women have advocated for TSMs since 2009.

There was hope that this goal could be achieved when a coalition of 20 male MPs formed ‘United for Equality’ in 2020 and established a cross-party Special Parliamentary Committee of Inquiry on Gender Based Violence (GBV), chaired by the Hon Charles Abel. While focused on GBV, the terms of reference of the parliamentary inquiry included “inquire into how women’s leadership can be more proactively supported to ensure that women can lead the response to GBV, including by examining options for temporary special measures for women in Parliament”.

The Committee held public hearings in May 2021 and March 2022 and took evidence from a wide range of people on the issues of GBV and TSMs. Public hearings indicated support for TSMs and, in fulfilling this mandate, the Committee sought to introduce five reserved seats for women – one seat per region – in spite of the fact that there are only four recognised regions in PNG. However, this proposal was contentious and failed through lack of community and government support.

The Integrity of Political Parties & Candidates Commission (IPPCC) has also been very active in its advocacy of its draft ‘Organic Law on Integrity of Political Parties and Candidates Bill’ which contains a provision for a 20% political party candidates quota for women. However, despite the current Bill having been drafted in 2019, approved by National Executive Council, gazetted and passed on to Parliament in September 2020, it was never debated.

This election will put to test the argument that women should compete on equal footing with men to win seats. Our preliminary analysis suggests that women are once again likely to struggle to get elected in 2022 due to structural challenges such as money politics, violence and insecurity, and cultural attitudes towards women that have become entrenched in PNG’s electoral process.

Some of the activities in this electoral cycle do provide grounds for optimism. While the COVID-19 pandemic had a significant negative impact in PNG, one of the positive results is that the IPPCC, rather than international organisations, have undertaken workshops and forums throughout PNG over the last four years to raise awareness, skill women and prepare them for the election. Women themselves have had to be more self-reliant and work more closely with the communities in their constituencies to gain support.

The complex and unpredictable nature of PNG elections makes it impossible to predict the outcome for women candidates at the 2022 election. There is no doubt that there are well qualified and courageous women seeking election, and there are some grounds for optimism that two or possibly more will be successful. There are no signs, however, that there have been any fundamental changes to the structural, institutional, and cultural barriers that were responsible for the outcome for women in 2017.

One can only hope that the lessons learnt from the 2017 and 2022 elections will be acted on to achieve greater success for women in 2027 by the implementation, hopefully, of TSMs.

Dr Lesley Clark served for five terms in the Queensland Parliament in Australia. Since 2006 she has consulted on projects in the Asia Pacific region to increase the political participation of women. She has participated in several election observation missions, including the last three in Papua New Guinea.

Teddy Winn is a PhD candidate in Political Science at James Cook University.