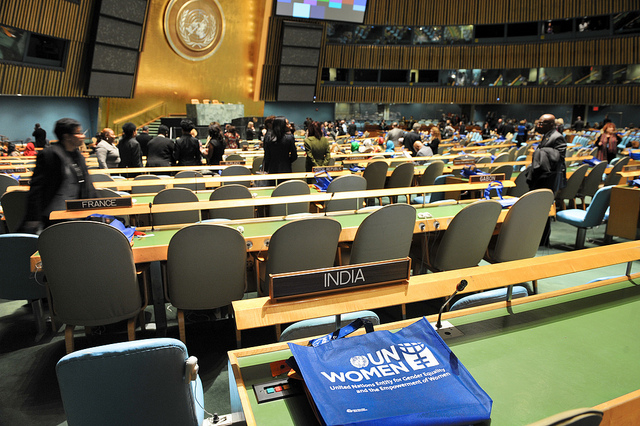 Will gender equality promises be kept? Accountability and the 2030 Agenda

The 2030 Agenda represents a set of hard-won achievements following years of mobilisation and sustained advocacy from gender equality advocates around the globe. Sustainable Development Goal (SDG) 5 ‘to achieve gender equality and empower all women and girls’ takes us far beyond the Millennium Development Goals (MDGs) and addresses many of the important barriers to advancing women’s human rights: the persistence of discriminatory laws and policies; alarming rates of violence against women and harmful practices; the lion’s share of unpaid care work carried out by women and girls; the unacceptably low number of women in decision-making across all arenas; and the continued violations of women’s sexual and reproductive health and reproductive rights, to mention a few. Other goals address key issues such as women’s poverty, the gender pay gap, women’s access to sanitation and safe transport for women.

A significant feature of the Agenda is its grounding in human rights. The Agenda recognises the need for real integration of social, economic and environmental policies to address urgent challenges of growing inequalities, climate change, violent conflicts and insecurity, refugee crises and the destabilised global economy. Importantly, the new Agenda applies to all countries and seeks to ‘leave no one behind’ and ‘reach the furthest behind first’.

Yet the evasion of real accountability for actually achieving the stated goals is a striking shortcoming that is at odds with the level of ambition of the Agenda. From a human rights perspective, accountability makes duty bearers (governments and others) answerable to how their decisions and actions, or lack thereof, affect people. Accountability mechanisms can provide individuals or groups a process to seek redress for injustices and grievances, as well as a platform to identify good practices and systemic failures to inform policy-making and implementation. The tentative and ‘voluntary’ nature of follow-up and review in the 2030 Agenda means that there is no actual answerability for the promises made but not met, thus putting the whole Agenda at risk.

Without proper accountability, implementation will suffer; particularly for the most marginalised groups that the 2030 Agenda states it does not want to ‘leave behind’. As was the case with the MDGs, the most challenging targets will remain off-track and there is risk of selectivity and fragmentation in implementation. Governments may cherry-pick or neglect issues because they are too contentious or perceived as ‘not relevant’ to national contexts. This is particularly worrying for gender equality given the interlinkages between the different areas and the need for a holistic approach. For example, improving women’s health and education outcomes also requires addressing violence against women and girls.

The weak reflection of accountability in the 2030 Agenda was not for a lack of innovative ideas. Very early on in the discussions on the SDGs, the Office of the High Commissioner on Human Rights and Center for Economic and Social Rights called for a ‘web of effective accountability mechanisms’ [pdf] that can hold all stakeholders to account, including governments, UN and the private sector. Many civil society organisations advocated for a reporting and peer review process that puts pressure on countries to implement the SDGs and incentivises positive results, drawing on the good practices of the Universal Periodic Review of the Human Rights Council. Some experts called for independent specialist experts to provide global assessments for specific areas that are difficult to monitor with quantitative data.

The Commission on the Status of Women has an important task to underline the significance of accountability for achieving the gender equality commitments in the Agenda. Governments must prioritise gender equality in setting up institutions, structures and whole of government policies for implementing and monitoring the Agenda. Women’s organisations are rightly concerned with ensuring strong gender indicators to monitor progress on the SDG targets as well as capacity building to fill data gaps. Equally important is monitoring the process and policies of implementation on the ground. Some 22 countries have signed up to make voluntary presentations of their national implementation efforts at this year’s High Level Political Forum. It will be vital to ensure that they systematically address gender equality issues.

We also need powerful ways of feeding the information generated from tracking progress and monitoring reports into the policy and political arenas at national, regional and global levels to ensure that there are feedback loops with all stakeholders. Democratic and inclusive spaces, including stakeholders such as civil society, parliaments and national human rights institutions, for navigating the inevitable tensions and trade-offs in implementing such a comprehensive framework will be necessary. Given the voluntary nature of follow-up and review, the responsibility will largely fall on civil society, including women’s rights advocates and organisations, to demand these spaces and processes. Comparative research on 70 countries over four decades recognises the role of autonomous feminist organisations in advancing women’s rights as the most critical factor in the implementation of gender equality policies. History tells us that for the promises of the 2030 Agenda to become a reality, we must support women’s organisations to effectively influence and participate in spaces where decision-making takes place.

Somali Cerise is a Research Specialist for UN Women. The views expressed are those of the author and do not represent the position of UN Women.