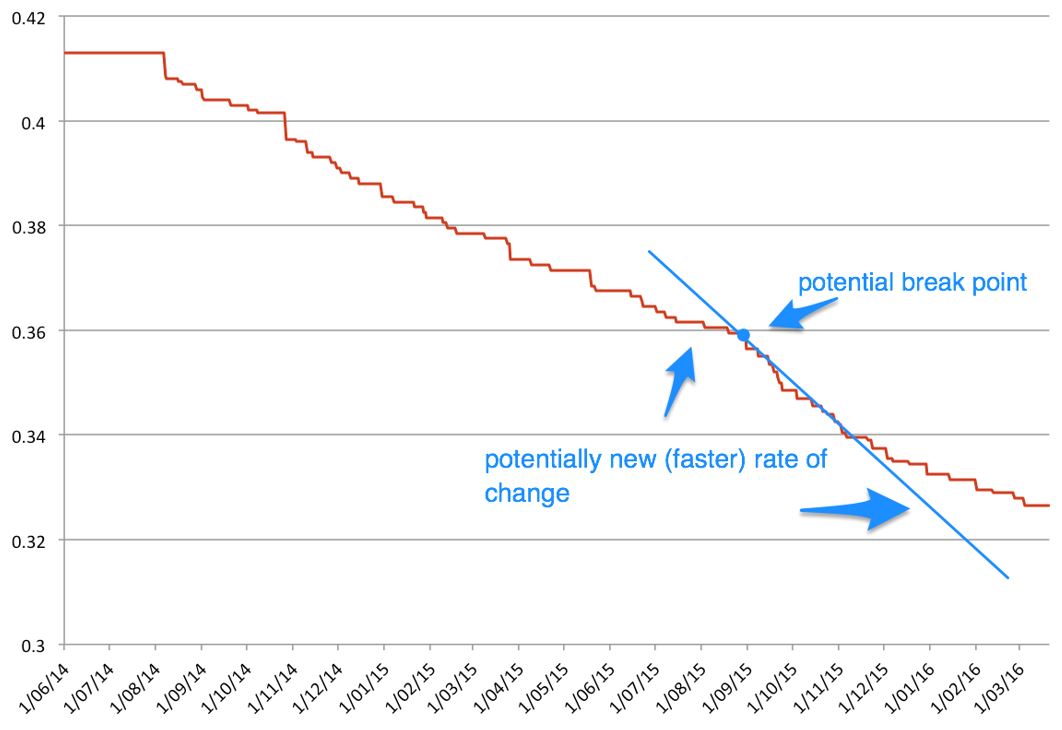 Since the institution of exchange rate trading bands in 2014 till now (21 March 2016), the Kina has been depreciating (on average) at a relatively steady rate of approximately 0.014 US cents per day (0.10 cents a week, 0.44 cents a month or 5.25 cents per year). In percentage terms, the rate of depreciation is 14.6 per cent per year (using a log model). While it is important to note that the Kina exchange rate is in fact relatively stronger and less competitive with more important trading partners than the US (like Australia and Malaysia), this post will focus on the Kina/USD exchange rate.

The IMF [pdf] and others have suggested that the relatively steady rate of decline in the Kina/USD exchange rate, which is being managed by the government, should be sped up, so that the rate more quickly achieves a market rate. This way, importers can access foreign exchange to pay international suppliers, and exporters are not hurt by the double whammy of low prices for their goods, and reduced competitiveness.

I conducted some analysis to confirm the robustness of my findings. In late October of last year I noticed an interesting change in the rate of depreciation, a potential “break” in the exchange rate data. That is, a date after which the rate of change becomes quicker. According to an initial analysis, which I conducted in December 2015, the rate of change after the potential break was almost exactly double the 0.014 US cents per day average rate of change of the period before the break.

If there had been a break, then any forecast about future exchange rates would have to be revised downwards, so even if it turns out to be insignificant, it is worth checking. On the graph below I have shown the potential break point, which occurs on 8 August 2015.

I used an econometric technique called a Chow test to determine whether (statistically) the rate of change after 8 August 2015 could be said to be depreciating at a different (faster) rate.

This suggests that the data for the few months after 8 August 2015 does not deviate significantly from the overall average, which suggests that it is temporary change, and that the overall trend is more likely to continue than the recent one. You can see from the graph above that the rate of change seems to slow again in January. This means we can have greater confidence in the data that suggests a rate of depreciation of 14.6 per cent per year.

There are a few caveats to make for this prediction. The first is that government policy may change, and as such there is no guarantee that the rate of depreciation will stay the same in the future. Secondly, at some point the exchange rate may reach a market rate and stop depreciating. However, with still reportedly large unfilled orders for foreign exchange, the market rate may be some way off, unless there is resurgence in global commodity prices.

Rohan Fox is a Visiting Lecturer in Economics at the University of Papua New Guinea.