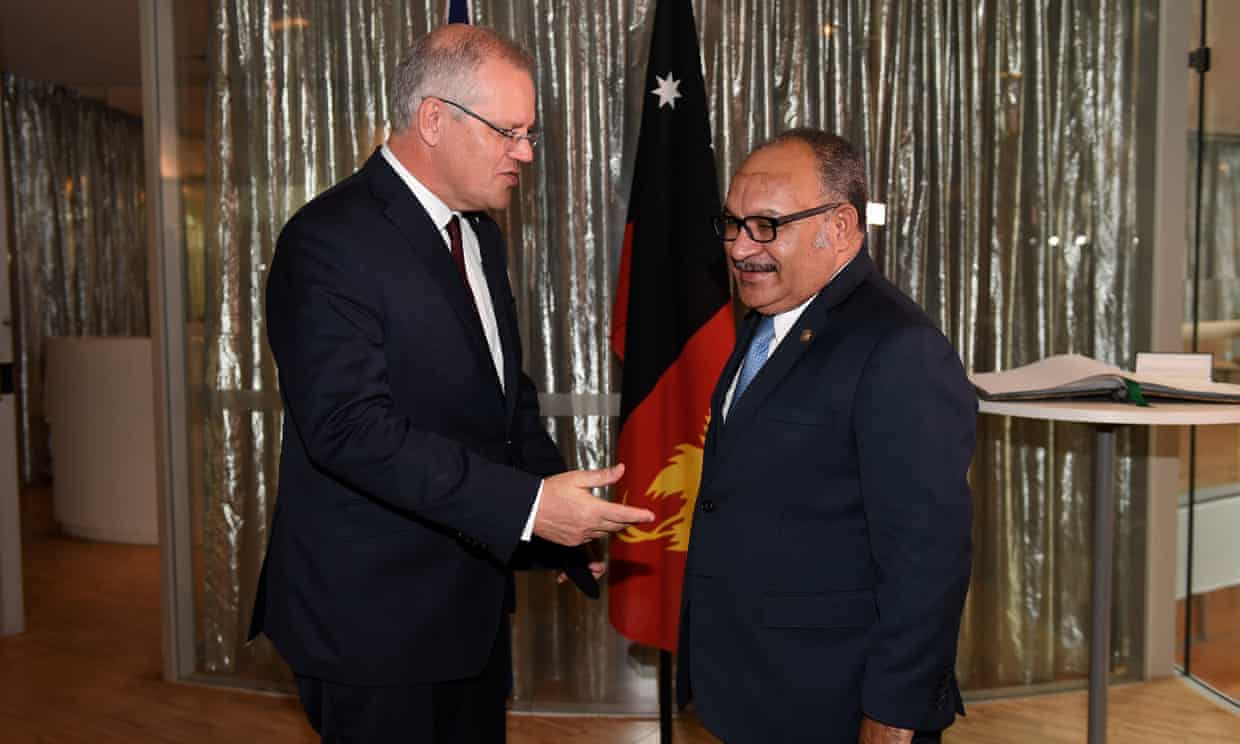 Will ScoMo’s Pacific step up be an aid budget step back?

By Ashlee Betteridge and Matthew Dornan

Scott Morrison has broken his Prime Ministerial silence on aid this week, in an ‘exclusive’ interview with the Daily Telegraph and a significant speech on the Pacific.

On Wednesday, Morrison spoke to the Tele’s Sharri Markson about his vision for the aid program, which is decidedly anti-multilateral but pro-sports.

“Why do we want to be in a race to spend lots of money badly?” he asked rhetorically in the interview, slighting the NGO sector and seemingly forgetting that the aid budget is now at historic lows as a percentage of Gross National Income.

The article confirmed there would be no increases to aid under his government. It’s worth remembering that Morrison’s maiden speech in Parliament in 2008 sung the praises of aid and called for its increase, noting that addressing global poverty was “a moral crisis that eclipses all other.” His tone in the Tele couldn’t have been more different.

The story did however suggest that more aid would be allocated to “sports diplomacy”: a pursuit of questionable development utility – at least insofar as poverty alleviation is concerned – and one to which Australia’s profitable sports codes could surely make some sort of financial contribution.

Multilateral organisations were broadly criticised, but there were no specific details on which ones might face a cut. The PM even suggested that the Coalition government has already been diverting aid funds away from multilaterals:

“…what we’ve done in it is to focus it more and more and get it away from all these international club joining exercises which I’ve always thought was pretty useless.”

To be clear, this isn’t the case. Since 2013-14 the percentage of Australian aid delivered through multilaterals has increased. His comments suggest that the multilaterals will be exposed if there are any further cuts – or to fund new Pacific infrastructure spending, on which see below.

A key message was his desire to refocus Australia’s aid on our nearest neighbours, also a significant theme of his speech delivered Thursday in Townsville. Morrison rightfully acknowledged the importance of the Pacific, referring to the region as “family”, and noting its unfortunate neglect in Australian politics.

But in other areas, the tone of his speech will be received with more mixed reviews in the Pacific – especially when compared to that by Opposition Leader Bill Shorten last week. There was no mention whatsoever of climate change. Furthermore, the Prime Minister’s references to “our patch” – an Australian term for the region that is viewed with widespread disdain among Pacific islanders – will not go down well.

The speech was defence-heavy, delivered at an Army barracks and including new commitments to establish an ADF Pacific Mobile Training Team, more Navy deployments to the Pacific and a new Pacific faculty at the Australian Institute of Police Management.

On the development side, the big announcement was the creation of an Australian Infrastructure Financing Facility for the Pacific (AIFFP). As with Labor’s announcement, details are thin and many questions need to be answered, but we did learn from his speech that the facility would be funded to the tune of $2 billion, would use a combination of grants and concessional finance to develop infrastructure, and presumably given its name, would restrict its activities to the Pacific. The Prime Minister also announced callable capital of $1 billion for EFIC, Australia’s export credit agency, designed to support SME investment in the Pacific (an activity unlikely to utilise the full amount announced).

Other announcements in yesterday’s speech included new diplomatic posts in the Pacific in Palau, the Marshall Islands, French Polynesia, Cook Islands and Niue (which has a population of only 1600). The establishment of these would mean that Australia has a diplomatic post in every Pacific Island Forum country.

There will be a “new” push to get Australian lifestyle programs, news, current affairs, children’s content, drama and potentially sports on to Pacific TV screens. This comes just four years after the Australia Network, which used to provide this very service, was shut down under the Coalition. As a point of difference, Morrison emphasised its provision by ‘commercial’ TV networks — the ABC, a public broadcaster, was the managing contractor for the Australia Network. This has already raised eyebrows: whether commercial stations are best placed to provide such a service, given ABC’s extensive international reach, is questionable. It’s also worth asking why we can apparently make do with only one Australian foreign correspondent covering the entire region (an ABC journalist based in Port Moresby), when we will soon have a diplomatic post in every single Pacific country. The need to invest in quality reportage persists.

A gnawing question relates to where the money for these initiatives will come from, and if aid funds are involved, what the new announcements will mean for an already stretched and slashed aid budget.

Morrison’s speech was characteristically light on detail here. The PM’s only comment: “You might ask how we’re going to pay for all of this. The answer is simple. We’ll do it from within budget.” Not really an answer because the government pays for everything from the budget. What we really want to know is — which bit of it? If it is from ODA, it sounds like multilaterals and perhaps aid to Asia will be in the firing line.

With no details on that so far, aid watchers should keep their eyes peeled for MYEFO (the Mid-Year Economic and Fiscal Outlook), due before the year is out.