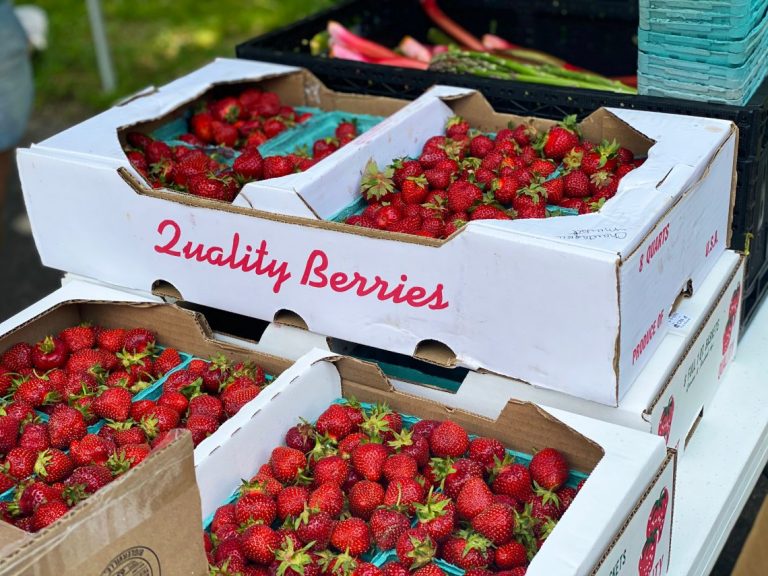 Working Holiday Makers not a long-term solution for horticulture

Due to border closures there has been a lot of recent debate about securing an adequate seasonal labour force for Australia’s horticulture sector as it faces the summer peak season. Solutions have included a proposal from the National Farmers’ Federation to fly in 150 Working Holiday Makers (WHMs) from countries with low cases of COVID-19 and unions lobbying to scrap the WHM visa altogether in favour of offering better wages for local workers to meet the demand. Mango farmers in the Northern Territory will soon receive 170 ni-Vanuatu workers through a Seasonal Worker Programme (SWP) pilot having favoured experienced workers from the Pacific for past seasons.

Over the past two decades the horticultural industry has moved to a model of heavy reliance on overseas temporary workers to pick and pack fruit and vegetables. The main group of temporary seasonal workers is WHMs.

WHMs suit the horticulture industry because they can be recruited and mobile at relatively short notice when workers are needed to get a crop off quickly and to the market. They are also incentivised by the opportunity to obtain a second-year visa following specified work in designated regional and more remote areas of Australia where growers have long struggled to attract workers. Unlike the SWP, there is no labour market testing, pre-approval of worker accommodation, or employer responsibility for worker welfare and wellbeing outside work hours.

The WHM program has been successful in increasing the number of workers directed to horticulture. However, the program still remains relatively unregulated and the most persistent issue with the WHM labour force is that they are highly vulnerable to exploitation. Growers hiring WHMs also often find that these workers are less productive due to their inexperience and the turnover of these workers can be high.

Australia is unique in terms of its heavy reliance on WHMs in horticulture.

According to an OECD 2019 report, Australia was the most popular destination for WHMs, compared to other OECD countries with similar programs. Australia received 44% of all WHMs across ten OECD countries. In comparison, Australia is ranked 9 against 13 OECD countries that received labour through designated seasonal worker programs. While the numbers under Australia’s SWP continue to grow (12,202 in 2018–19, but less than 9,000 in 2019–20 due to border closures), it still remains small relative to the WHM program (Figure 1). 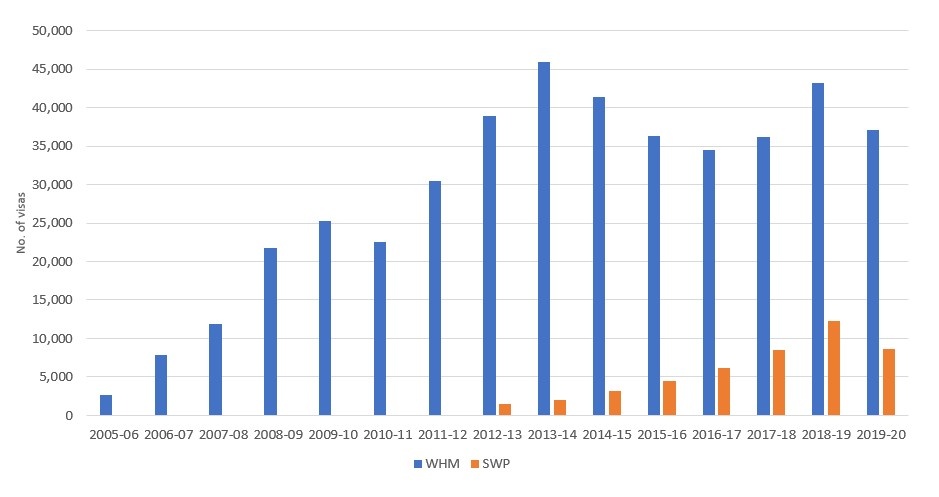 The industry has lobbied for a dedicated agricultural visa; however, this campaign fails to recognise that the WHM visa is already operating as one. The second-year WHM visa incentive is already a deliberate policy decision to direct WHMs to work in regional Australia and primarily in horticulture. (And now there is a third-year, more on this below.)

An analysis of visa approvals shows there is a clear shift in who is using the second-year WHM visa.

Despite Australia’s international border closure on 20 March 2020, the 2019–20 uptake of the second-year visa (ratio of second-year to first-year visas) has remained relatively high (Figure 2) despite the lower numbers of WHMs remaining in Australia (almost 50,000 less at 30 June 2020). 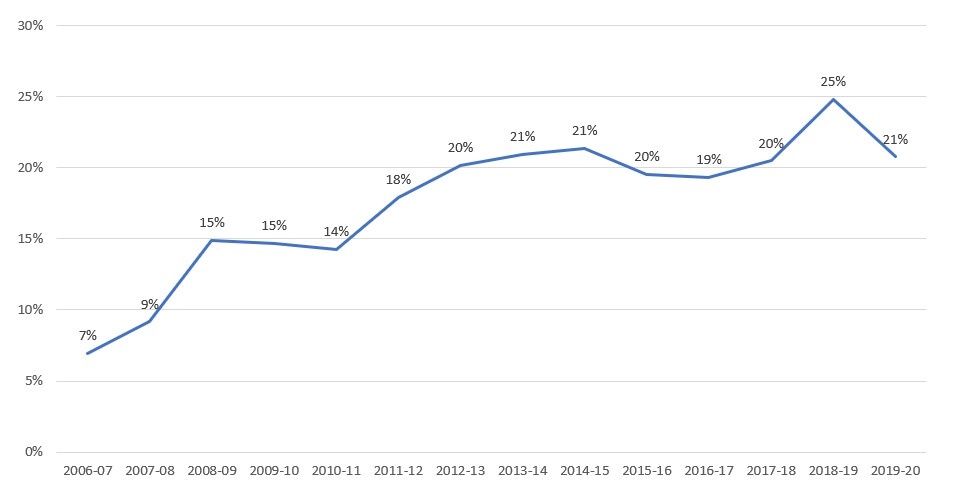 Comparing second-year to first-year visa numbers in the same year, 2019–20 shows a record high of 31% (the previous year was 26%). While 32% fewer WHMs decided to come to Australia in 2019–20 compared to the previous year, only 20% fewer WHMs already in the country decided to work in regional areas and extend their stay in Australia.

Greater insight into the use of the WHM visa comes from analysis of the differences between the two WHM visa subclasses, 417 and 462. The 417 (Working Holiday) uncapped visa is available to passport holders from 19 high-income countries (European and East Asian countries) and the 462 (Work and Holiday) capped visa is available to passport holders of 25 countries, nine of which are middle-income countries in Southeast Asia and South America. (The 462 outlier is the United States where numbers are uncapped.)

Further to previous analysis on second-year WHM visa approvals, the increase in uptake by the 462 visa partner countries continues to be strong, with no fall at all this year despite the pandemic. 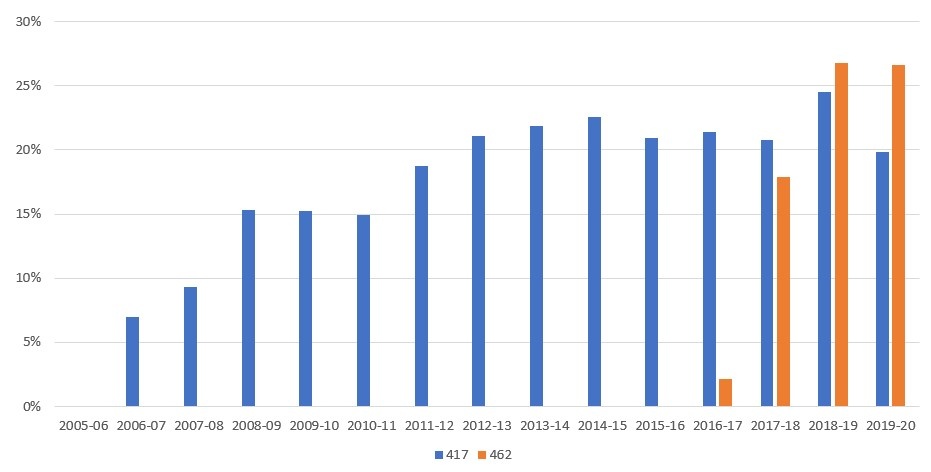 While there has been a COVID-19-related reduction in second-year 417 visas in 2019–20 (24%), there has also been a 6% increase in 462 second-year visas. There could be various explanations for this, but perhaps the most plausible is that given the competition for 462 visas, these visa holders are more determined not to lose the opportunity they have been given by returning home early. 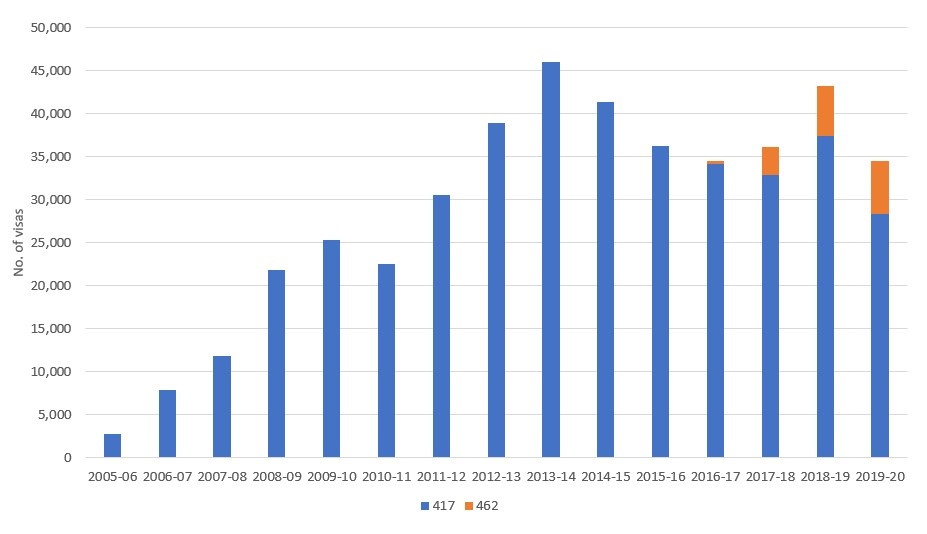 Figure 5 shows the ten countries with the highest uptake of second-year visas (out of all countries that have at least 100 second-year visa holders). Six of the top ten are in the 462 visa subclass, and again this is where the growth is. The uptake for second-year visas in 2019–20 for Vietnam was 77%, Indonesia 68%, Argentina 51% and Thailand 42%. 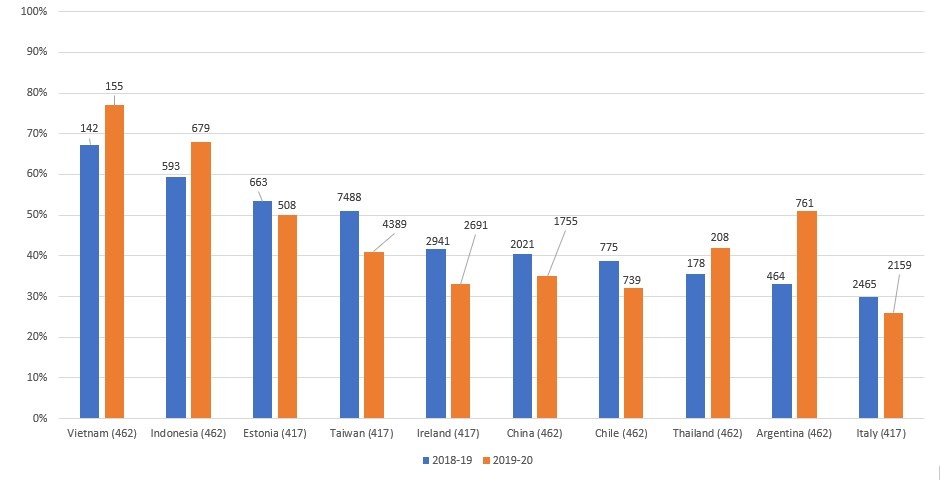 The WHM program is a well-established source of seasonal labour in horticulture and is likely to be part of the mix in the medium term. Questions remain whether it is a long-term solution to seasonal labour supply. The industry has made significant efforts to stamp out exploitation through supply chain initiatives such as Fair Farms and state-based labour-hire firm oversight and licensing in Victoria, Queensland and South Australia.

However, given Australia’s strict approach to international and internal border controls due to COVID-19 this is the ideal time to focus attention on Australia’s existing dedicated seasonal worker program – the SWP. Temporary labour mobility opportunities are in high demand in Pacific Island countries and interest in participating in the SWP exceeds the opportunities currently offered by Australian employers.

Improvements could be made to make the SWP more responsive to the needs of employers and to decentralise aspects of the program’s oversight and coordination. The SWP can deliver a trained labour force and importantly offers much greater protections from exploitation. It is yet to be utilised to its full potential.